Lest you all think I've thrown myself from a nonexistent nearby cliff, I'm writing to reassure you that my sanity is still partially intact and also to thank all of you for your kind words and support.  There are a number of issues at play here and although the big trigger is when my dearest is exercising her lungs and vocal cords, my inability to deal with that lately stems from a lot of other stuff.  Here is a list of some of said stuff:

1.) I'm tired.  She's taken to waking up multiple times per night as opposed to the just once that I was getting used to. The past few nights she's woken up just 45 minutes after I've gone to sleep which really hurts. Last night she was up at 11ish, 1ish, 2ish, and then 5ish.  Now, I've learned to function just fine on interrupted sleep, but patience is shortened as is my emotional tether.

2.) I miss my hubby.  He's been pretty unavailable for the past 2 weeks, some of which is understandable (time with the brothers is a must), and some of which is less understandable (no examples since I have a feeling he wouldn't appreciate me airing dirty laundry).  An unstable relationship was contributing greatly to my stress.  Since he was off today, we've spent the day talking and resolving issues.  (Who knew that having kids could change your relationship THIS much!)

3.)  I'm not into the whole work thing. Yes, I know how spoiled that sounds, but hear me out.  On a super rare and amazing day, Hannah's naps MIGHT total 4 hours.  As a part-time employee, I need 20 hours per week.  That comes out to 4 hours per day.  That might seem like nothing to all you full-timers but for someone who is attempting to also be a full-time stay-at-home mom and work during naps, it's stressful. I have virtually NO down time, especially on those nights when Hannah decides to scream for 2 hours rather than going to sleep. In addition to not having down time, I have no time to clean my house which is incredibly slovenly at the moment (Eric and I have taken to double-teaming it on weekends so I guess it'll get cleaned this weekend) and little time to eat (yesterday I had a smoothie for breakfast and some leftover Christmas ham with mustard for lunch...it's no wonder I was 3/4 of the way to crazy town by mid-afternoon).  Futhermore, I have not had any actual work to do at work since November which means I am struggling to find ways to "professionally develop" myself and am getting bored and feeling useless doing it.  Back when there was work, working was a bit more fun because it provided that feeling of success that you just don't get when mothering a baby who is incapable of giving you a gold star for a job well done.  So yeah, I know there are those of you who are like, "is she crazy?? She's complaining about being paid to do nothing??"  YES I am because there are lots of other things I could be doing with my time not the least of which would be NAPPING to prepare for the potential insanities that each day brings.

4.) When I am winding down each night, you know what I wind down with? Baby books.  Last night I spent about a half an hour analyzing this log I'm now keeping of Hannah's activities and doing the math of how many naps she took, how much time elapsed between her last nap of the day and bedtime, how many fits she had, etc. in an effort to draw some correlation as to WHY.  When I'm not doing that, I'm trying to get through this Sleep Lady book.  This means that I am ALL BABY ALL THE TIME.

5.) Did I mention that my house is a mess?? It is and it's driving me insane!

6.) Did I mention I was tired? I did?  Welllllll....clearly this list is over. Now that I've thoroughly explained myself (as opposed to the psychotic ramblings of the most recent posts--sorry for any worry I've caused. I should probably have a "no blogging when crazy rule"), how about some GOOD NEWS.  Although Hannah has reverted to cat naps (30-45 minutes) these past 2 days and despite her new habit of waking up repeatedly throughout the night, her bedtime has been smoooooooth!  Last night she was down and out by 8:30, tonight by 8:15.  Can I get a woot woot!!!  So I'm blogging and wishing I could put in this cheesy chick flick that has been sitting in it's Netflix envelope for a week now but knowing that I need to take my tired a** to bed ASAP.  But before I do, here are a couple of cute pics I took earlier this evening. I was getting in the shower and Eric was kindly folding/stuffing the diapers and watching Hannah and he decided to bring both into the bathroom so he could hang with me while doing so.  He ended up putting Hannah in the laundry basket (something I constantly want to do but never do). 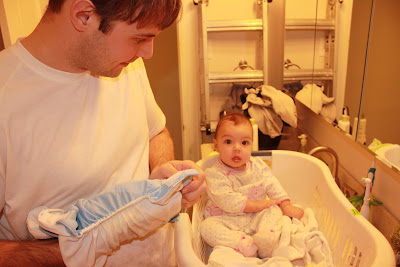 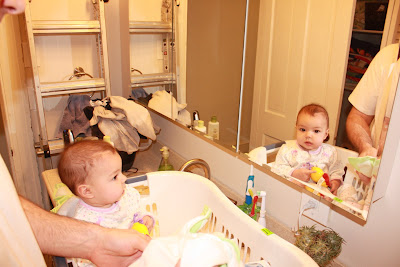 The lighting isn't great because I still don't know to work my camera....But you get the idea.  Alright, off to bed with the Sleep Lady!!

....Or not.  While re-reading this prior to posting, the little banana started screaming...I sent Eric up for now since I know her screams aren't hunger related.  So I'm off to help soothe a screaming baby which ideally won't take a terribly long time...Wish me luck!  Actually, wish me patience and sanity instead....
Posted by terri at 8:59 PM