The Meaning Behind the Name (A Little Bit of Geneology)

My college gals came to visit tonight and brought presents, one of which was a baby book.  I started flipping through and filling out the first couple of pages and came to one where you can write about the significance of the baby's name which reminded me that I drafted this post a while back, way before Hannah was born, but never posted it because I was waiting for my mom to find more details.  She ran into a brick wall though so who knows if those details will ever come. If you've ever wondered why we named her Hannah Jane, read on!

My grandma (mom's mom) was very big into geneaology and did tons of research while alive. When I was in college, she had an aneurism and spent some time in a hospital in Baltimore. Since the next nearest relative was an hour and a half away, I tried to visit her every day or at least every other day. I'd never spent a lot of time with my grandma when I was growing up because she lived over 4 hours away. After traveling back and forth to Virginia Beach to visit Eric (which took 4 hours on a good day), that distance doesn't seem as big of a deal, but as a kid, 4 hours in a car seemed like forever. We visited pretty regularly when my parents were married, but after the divorce (I was 7), my mom went back to college and worked three different jobs in an effort to keep the electric turned on and tuna casseroles in the fridge. Taking a weekend off to visit her parents was a luxury she couldn't afford so me visiting my grandmother in the hospital was the first opportunity I had to get to know her. In addition to working on crossword puzzles (an addiction I developed as a result of this time spent with her) and listening to her tell me stories about my mom and her sisters and brother, I asked about our family story, specifically, I wanted to know how the Native American blood got into our family.  My pappy (her husband) looked full-blooded Indian with a full head of thick black hair, the prominent nose, and dark coloring.

Grandma told me the story of a grandfather waaaay down the line (5 "greats" to be exact) who was kidnapped by Indians and fell in love with one of the women who he later married (a real life Pocahontas story! What's not to love about that??). Her Americanized name was Hannah. I immediately decided that my future daughter would be named Hannah. If there were any record of her Indian name, I would probably opt for that name instead, but Grandma said she never found a record of any name other than Hannah.

When my grandmother died a few months later, my mom inherited her geneology research, and when I found out I was pregnant, I asked her to dig through that research to try to find the specifics of the story. So far she hasn't had a lot of luck finding anything on Hannah, but here's what she did find.


This great-to-the-5th-power grandfather of mine went by the name of Joseph Pipes, and he was born in 1763 in New Jersey (I have a photo of him but it's a .tif which won't upload and I have no idea how to convert it to a .jpg.  Apparently there was once a photo of Hannah smoking a corn cob pipe--how freakin cool is that!!--but it's missing...). Joseph was in the Revolutionary War (Pennsylvania militia) and was taken prisoner by the Indians after a battle. He was kept prisoner for 4 years and, according to the notes my mom was able to dig up, was treated "with great severity" most of that time. When the Indians treatied with General Butler Clark, Joseph went with them and served as interpreter for 2 years. The only other information she was able to find was a note written by my grandmother that said: "There are several good stories concerning Joseph Pipes, that I will save them for my full history." So that means more digging for my mom and more patience for me. The only other information we have is that grandma "thinks" that Hannah was a Shawnee, which my mom guesses means that grandma found conflicting reports but found the Shawnee story either more often or from more reliable sources. 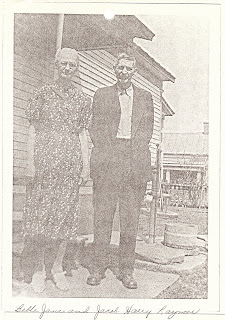 As for the middle name: Jane is my mom's middle name. Eric and I were brainstorming a name that would sound good with Hannah and still have some meaning, and since my mom is obviously one of my most favorite people in the world, why not have Hannah share a name with her? There's a little more of a backstory there as well, but nothing as exciting as the Pocahontas story: The name Jane came from my great-great-grandmother on my mom's side, Belle Jane (cute, huh?). So my mom, Bonnie Jane, was named for Belle Jane, and now there's Hannah Jane! Oh, and the photo of Belle Jane with her hubby was a .jpg so I was able to upload.
Posted by terri at 10:37 PM