No one's clothes are off limits when Hannah's creative fashion juices get flowing. This season, she's sporting Eric's shoes, jeans, belt, scarf from his grandmother, and headlamp along with her fleecy pajama top. Take notes people. 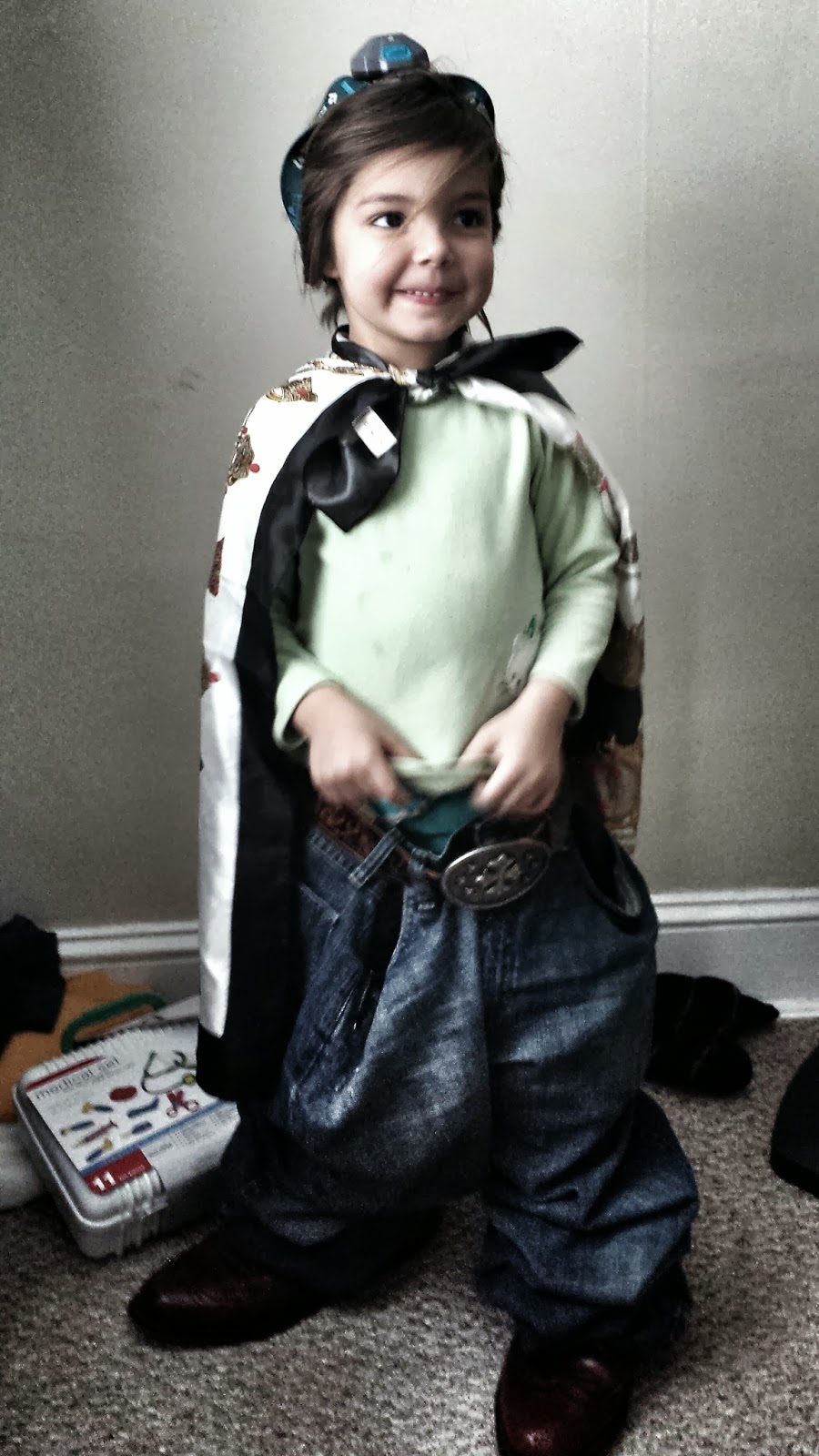 Dressing up with friends

Raiding the dress-up box is one of the first things most of Hannah's visitors do when they arrive at our house, but it was a first for both the friends below.


We miss having Zoey live next door and loved having her over for a few hours on Saturday! 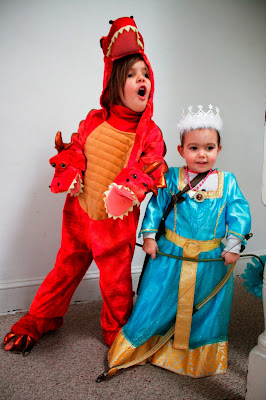 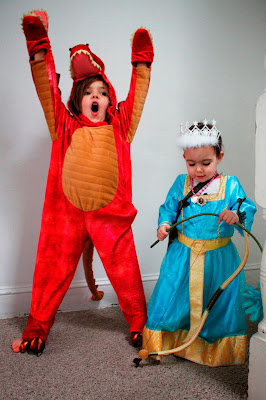 December. All of it.

This is our December in something slightly larger than a nutshell. If you make it to the end, you may need to do some finger stretches to recover from all the scrolling. I hate to photo dump on you like this, but I'm ready to be done with 2013!

Now that he's home, I feel safe announcing to the world wide web that Eric was gone from November 13 to December 21, and it sucked! The kids and I got into a routine, and we had a TON of help from our community, including Jessica who came for the dinner and bedtime routine every Tuesday and Amy who took care of us when Hannah and I battled super high fevers.

The good news is that he got a break in the middle for Thanksgiving and got to come home and eat turkey and pumpkin pie rather than being alone in his hotel room on the other side of the country.

We rolled right from turkey day into Christmas in that one short weekend, starting with tree trimming. 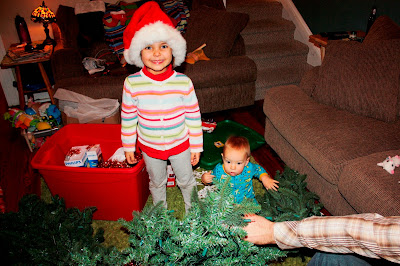 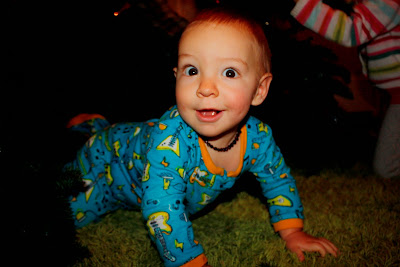 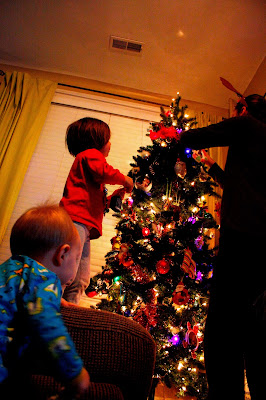 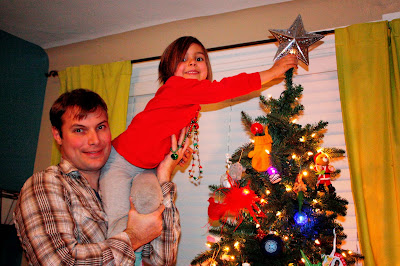 Then we walked down to Rocket to Venus for dinner and sat on the enclosed patio where we could see the 34th Street lights when they came on for the season. After dinner we strolled over for a closer look and found that the lighting ceremony included a Santa who was taking lap requests from neighborhood children. Hannah was thrilled. Her interest in Santa really peaked this year, and although we've always let her know that Santa is imaginary, this year she stopped believing us.

While standing in line to sit on Santa's lap for the first time ever, I asked Hannah if knew what she was going to ask for. Her reply: "yes, but I'm not going to tell you." I explained that her odds of having her wish come true increased exponentially when she told me, but she kept silent. The only clue Santa would give me is that it walks on four legs...Since she's been obsessed with those Buddies movies about the golden retriever puppies, I'm assuming she asked him for a dog. She confirmed my assumption on our walk home and explained to her again why we can't have a dog right now. She said, "It's okay mom, that wasn't the real Santa." 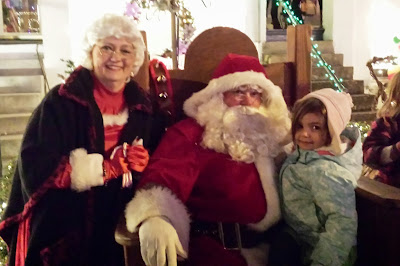 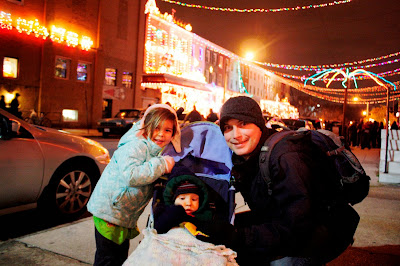 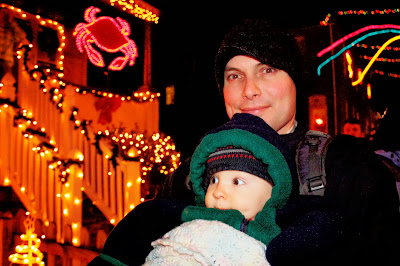 Amy came the next weekend to take Hannah to the BSO for a family concert, and we walked down to the lights again later that evening, this time stopping at The Charmery for some of their super awesome hot chocolate. This time Hannah sat on a different Santa's lap. He was just for picture posing to raise money for a charity though--he wasn't taking requests for the big guy up north. 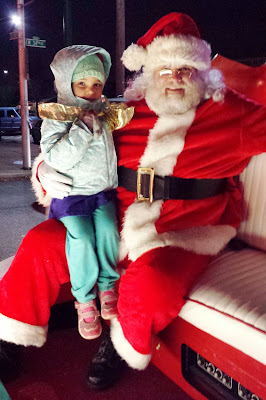 On the following weekend, we got very, very sick. We had all kinds of activities planned including tickets to the Holiday Cirque at the BSO but instead Hannah and I took turns sitting in lukewarm baths, crying and shivering and begging to get out, in an attempt to bring down our high fevers. Amy came to take care of us and help with Jacob who managed to avoid it all. Prior to the fevers, I had reached burned out status from single mama mode. Throwing fevers on top of that accelerated me into something far greater than fatigue. I was counting down the minutes until Eric's return and had every intention of retiring to my bed for a few days when that happened.

Amy came again a few days later on the eve of her birthday and brought presents for Hannah: a globe!! That's what Hannah told Amy she wanted, and of course the jet-setting, world-traveling Amy was happy to make that happen. She also bought her a children's atlas so we can point to a place and then read about it. 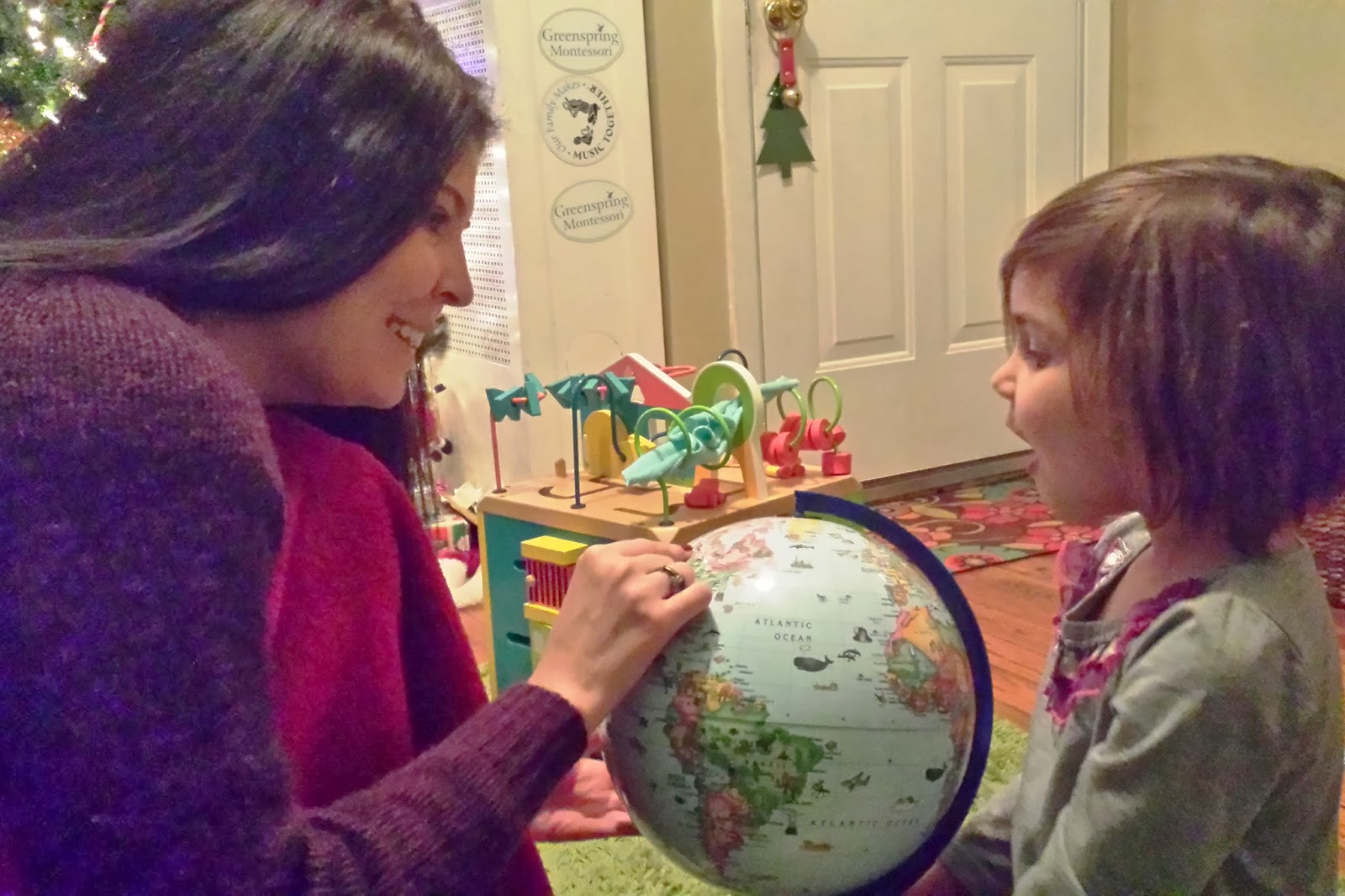 We celebrated Amy's birthday the next day with some vegan chocolate cupcakes with pink candy cane icing from Goldenwest. Yum!!! None for Jacob, but he was a good sport and wore the hat. 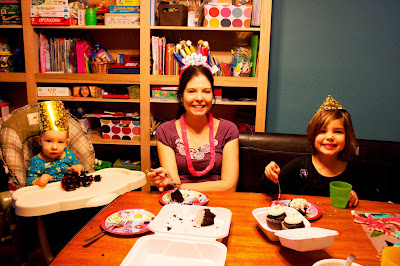 Eric's first flight home on the 20th got canceled causing him to miss his second flight and be re-routed through DC so instead of getting in at 8:00 on that Friday, he arrived at 3:30 a.m. We let him sleep in the next day, and then we spent the afternoon at Cylburn enjoying the crazy welcome warm weather. Almost 70 degrees in December! Yes please! 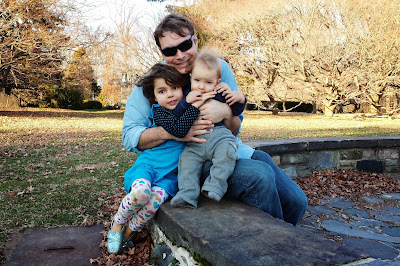 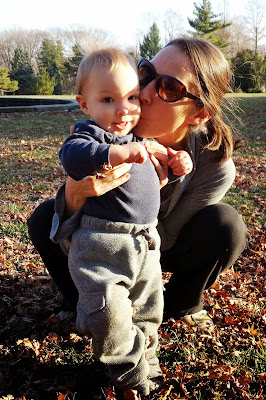 Grannah and Granpah arrived later that evening, followed by Justin and his girlfriend and dog. We made a big dinner the next day for Eric's birthday, and I baked a chocolate cake with coconut icing that turned out amazing thanks to Kathryn and Caroline who supplied me with awesome recipes for each.

While he was cleaning up, I took the present out of its basement hiding placed and set it on his chair until he noticed. I can't tell the world wide web what the present was, but he cried. It was very sentimental and exactly what he'd been wanting. It was also very expensive and took the collaboration of many wallets, including mine, his parents, his brother, our neighbors, and my mom.
We all got fancy pants the next day and went to lunch. Check out Jacob's hand-me-down super slick outfit. 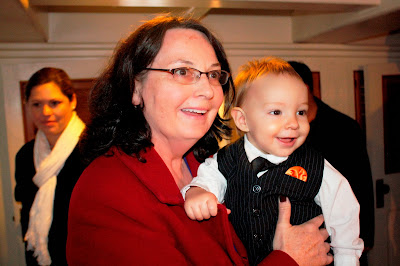 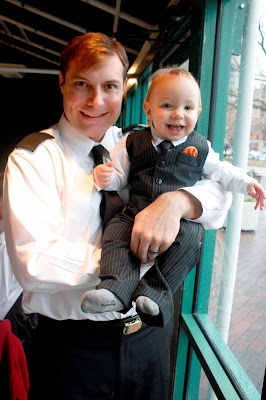 We got dressed up again the next day and had our pictures taken by Laura at various local settings, including a hotel lobby across from Hopkins. This was mine and Eric's Christmas present to his mom who has been wanting family photos for a very long time.

And then it was Christmas!

Hannah got a new backpack that she'll be able to fit a library book in without having to leave it unzipped.
She got a cooperative board game and some fun new accessories from Uncle Joel. 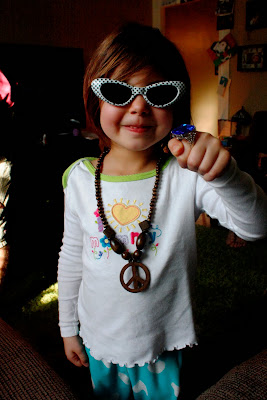 Grannah and Granpah got her a ton of stuff, including this really cool knit hooded sweater that she loves and wears constantly. 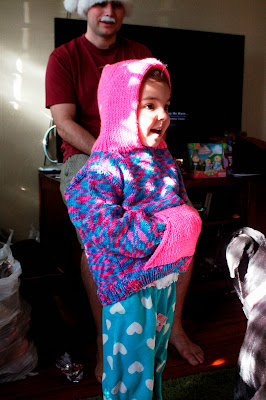 They also got her this awesome fort building kit that I am loving because it means the couches don't have to be torn apart to make a bear fort. 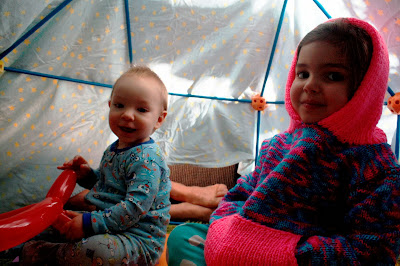 She also got a foam letter floor mat set from Uncle Justin, the yellow lab Calico Critters family, the new Ladybug Girl book, a bunch of new Stella books, and probably a lot of other stuff that I'm missing.

Eric picked up some more fake mustaches so we took another mustache shot. Looks like this might become a very fun annual tradition. 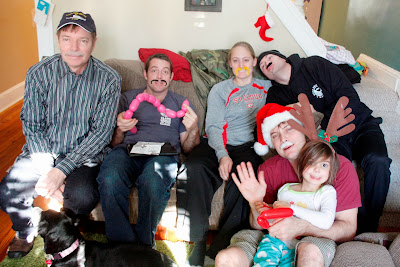 Present-opening occurred during Jacob's nap time so he missed most of the hoopla, but we had round two when he woke up. Babies are hard to buy for and really don't need anything (or know the difference if they get nothing), so he didn't get much. I picked out these textured critter balls for him that he seems to like, and he got a new starry turtle from Grannah and Granpah since the one Jessica and Todd got him when he was born had some sort of electric malfunction and would only flash on and off creating a less-than-restful starry strobe effect that Eric was unable to fix. 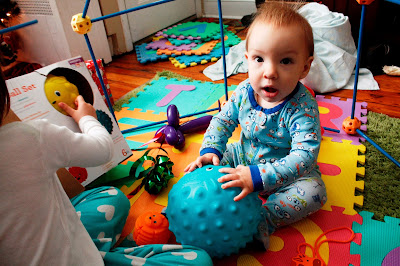 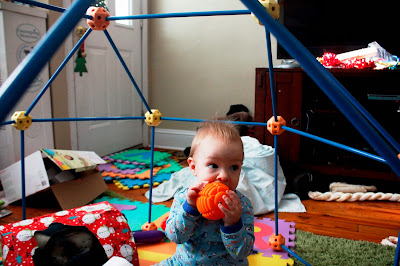 Jacob and I slept through Christmas dinner. Here's the rest of the gang.
We drove to my brother's house the Friday after Christmas to celebrate with him and my nephews and my mom. In spite of that one Christmas day nap, I still hadn't recovered from the 6-week single mom streak, so I spent most of my time laying on the couch rather than taking pictures. My mom got this cute one of Eric, the human jungle gym, reading to Hannah and Clay.
A few days later, we drove back to Hagerstown to celebrate with my dad and Sondra. They have a new golden retriever puppy who Hannah LOVED! Oddly enough, I didn't get that many pictures of Ginger...I'm still using the "I was tired" excuse. I'm beginning to wonder if I will ever not feel tired... I did snap some pictures with my phone though which is more than I managed at Chip's. 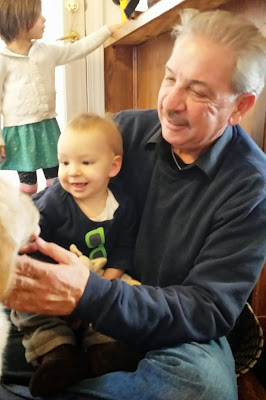 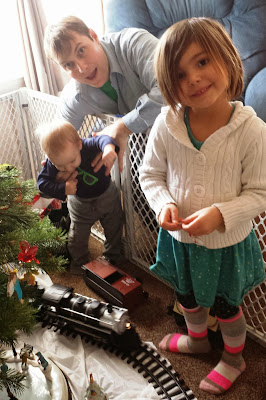 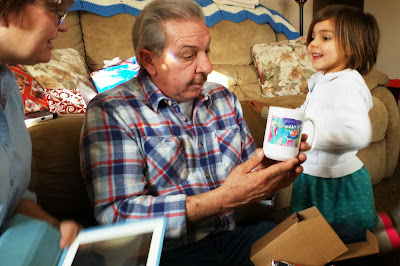 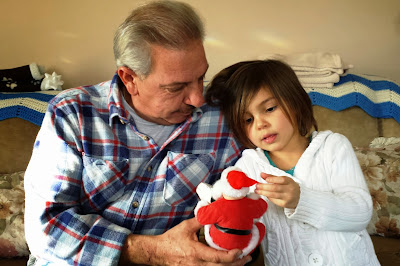 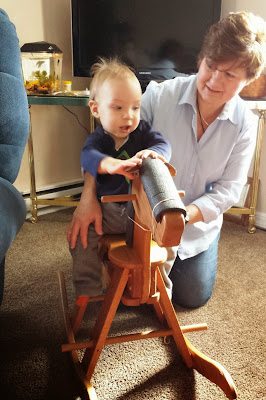 Love this kid's sense of style. 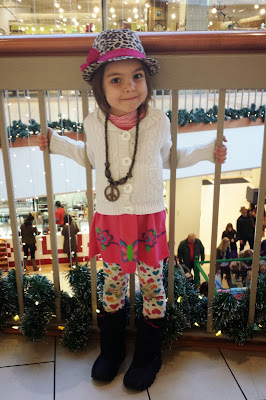