The rest of April

I'm going to catch up; I'm determined. I have to go all the way back to April to do it though, back when the trees were as barren as they are now, but instead of the forest being covered in crunchy leaves, it was covered in the bright green shoots of early skunk cabbage.

On one such day, Jacob helped Eric move a few plants around the yard. 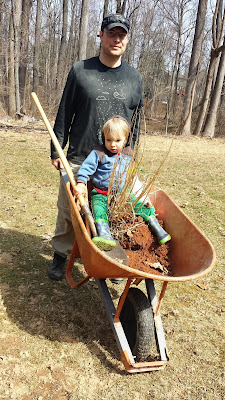 When the wheelbarrow stayed put for an extended period of time, he perched on the bridge to read a Foxfire book that we'd pulled out of the mailbox that morning--a thank you present from Grammy for daddy. 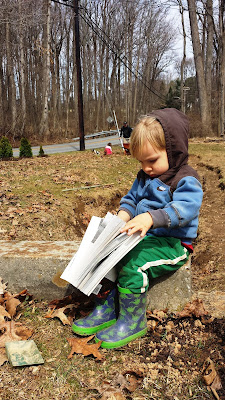 On another one of these nice April days, we strolled down to the stream, still freezing cold from winter, and Hannah stripped off her shoes and tights and strode in. 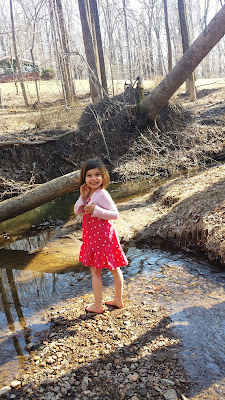 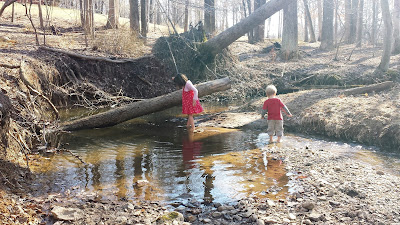 I want to stress that it wasn't that warm, but I suppose it's all relative, and the winter was bitter cold by my standards (anything that drops to the single digits, let alone staying there for days at a time, is too cold in my book), so 40s and 50s did feel pretty amazing. 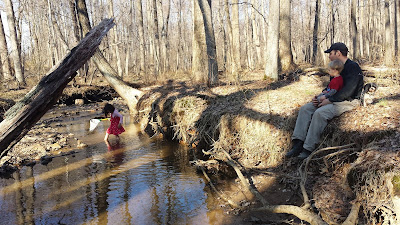 I think this one was taken at the park near their school...that's all I have to say about that. 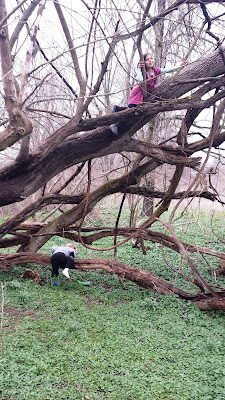 I find myself taking shots of this section of the stream frequently. I'm not sure what the attraction is, but in this one I think I was admiring the way those stinky skunk cabbages greened up a sea of brown. 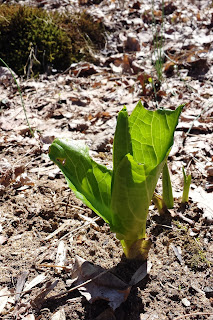 The thorn bushes were the next plants to show up to the green party. 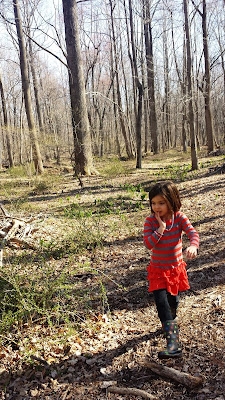 I'm not sure I made this clear, but this post is just the rest of April--everything after Jacob's birthday party. I want to stress again that it was definitely not bathing suit and sprinkler season, but the kids disagreed, so I set up the sprinkler. Hannah put on a bathing suit, and Jacob merely discarded his drawers. Their wardrobe choices (or lack thereof) often leave me chuckling. 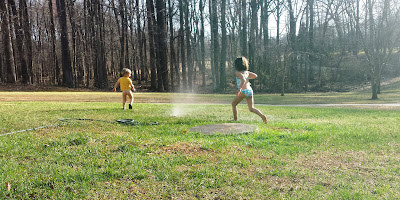 They wanted to eat dinner outside, so I carried out the little table and their bowls of soup, and they enjoyed a half-naked meal on the front porch. 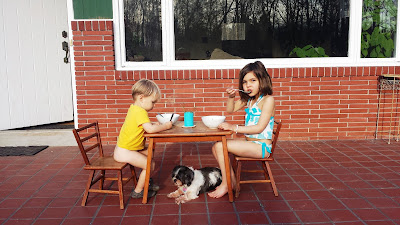 The weather seriously warmed up after that, so much so that we felt compelled to get ice cream--our first ice cream trip of the season. It's days like those that make us miss living in walking distance to The Charmery. With that off the table, we headed over to Stone Mill Bakery and drooled over the gelato section for an indescribably long period until finally deciding on a little bit of everything. 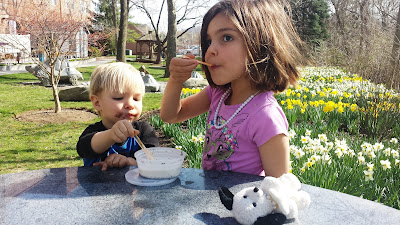 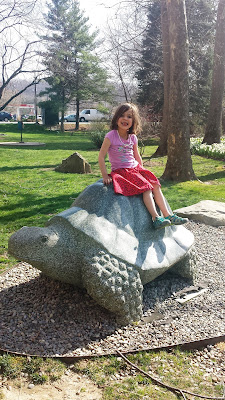 On some days warmer weather means ice cream, and on other days it means campfires and 'smores; that's just how we roll. 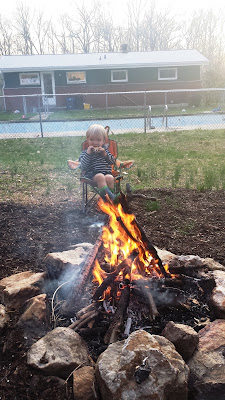 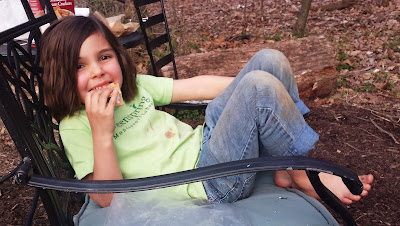 Our friends Brody and Addison came over toward the end of the month to climb tress and catch frogs. 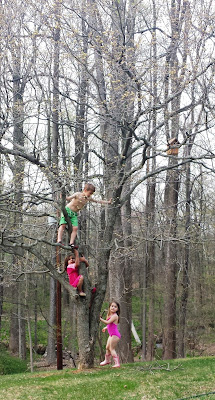 During the catching frogs part, I broke my foot. I was walking down the steps into the concrete pond, and I rolled my left foot and crushed my fifth metatarsal. It's called a dancer's fracture because it's commonly done while dancing around on point shoes. The second most common group of people to break this bone are uncoordinated moms attempting to catch toads. So, I rolled it in a pair of sneakers that have just the slightest amount of a sole (this is why I don't wear heels people!); it was just enough to roll off of. I rolled it while I was stepping down so I landed on it with all my weight. I heard a crunch and and knew instantly that I'd broken it, but I was also in denial. I'm not sure if that makes sense...Have you ever known something for certain while simultaneously being in denial of that same fact that you were certain of?  This was the situation. 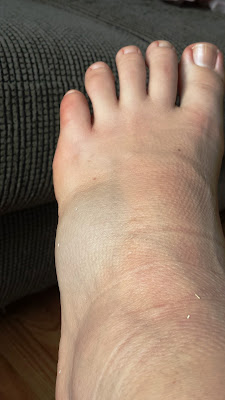 I couldn't put any pressure at all on it so in between piggie-back rides from Eric, I hopped on one foot and then resorted to a sort of three-legged downward dog hop. That's how I was getting around the next morning when I decided to go to the doctor. Hobbling around in a boot for the next 6 weeks sucked but was significantly better than the three-legged down dog hop. After the boot, I was put in a tie-up brace for another 6 weeks. That took me up to mid-July, at which point I happily bared my bare feet for the rest of the summer. 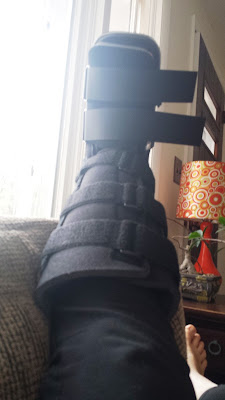 After a long winter of terrible home haircuts, I broke down and took Joy to a groomer for a proper trim. My instructions were simple: take it all off, or at least as much as possible. A dog that small with hair that long running around these woods meant that we all spent way more time grooming her than we did grooming ourselves, so I said to skip the fancy face fluff and make it functional. It's amazing how much a haircut can change up your look!! 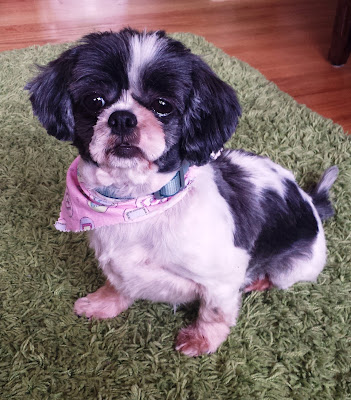 At the end of April I took Hannah to the Hippodrome to see Wicked. She'd been begging to see it since I went with my mom when she was 3, and to calm her freakout at the time, I promised her I'd take her next time Wicked came to Baltimore. I almost bailed when I saw ticket prices, but I ended up keeping my promise. This was our pre-show photo shoot. 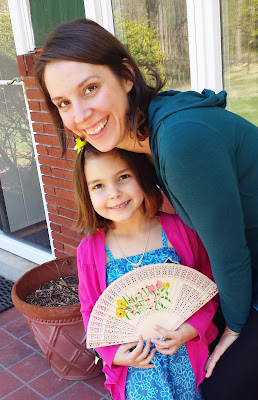 Jacob photo-bombed this one. 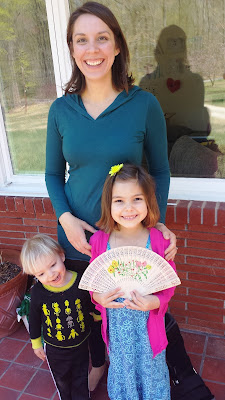 I was quickly reprimanded after snapping this shot of Hannah inside the theater. Apparently there is a pretty strict no-pictures-in-the-theater-EVER rule. 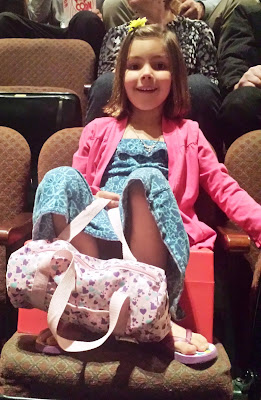 Pictures outside of the theater are just fine though. 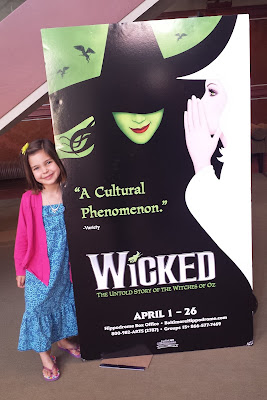 This is where I make an abrupt transition from Broadway to deer carcasses and the dogs who eat them. One day while putzing around the woods without me, Joy led Eric and the kids to a pile of mostly picked over deer bones. She managed to dislocate a leg and attempted to carry it off, but Eric swiped it and threw it into the bushes. He then got distracted, but she did not. She found the leg and carried it up to the house where she spent the day gnawing on it. I find the image of a tiny fluffy dog like that chewing on a deer bone hysterical, but if it's too gruesome for you, my sincerest apologies. 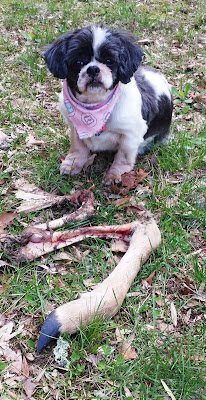 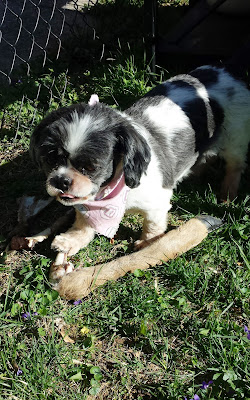 I guess this pic of the guys in the Japanese Elm by the driveway is the last one I took in April....so that's that! As the weather turns colder and darker, I'll see if I can post more pics of us enjoying the weather getting warmer and brighter. 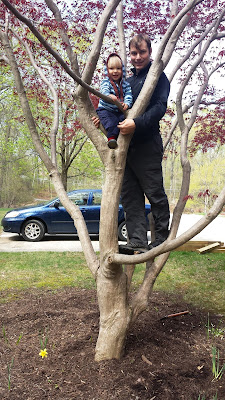