The upper elementary kids have four chickens on campus that we've been visiting pretty much daily. 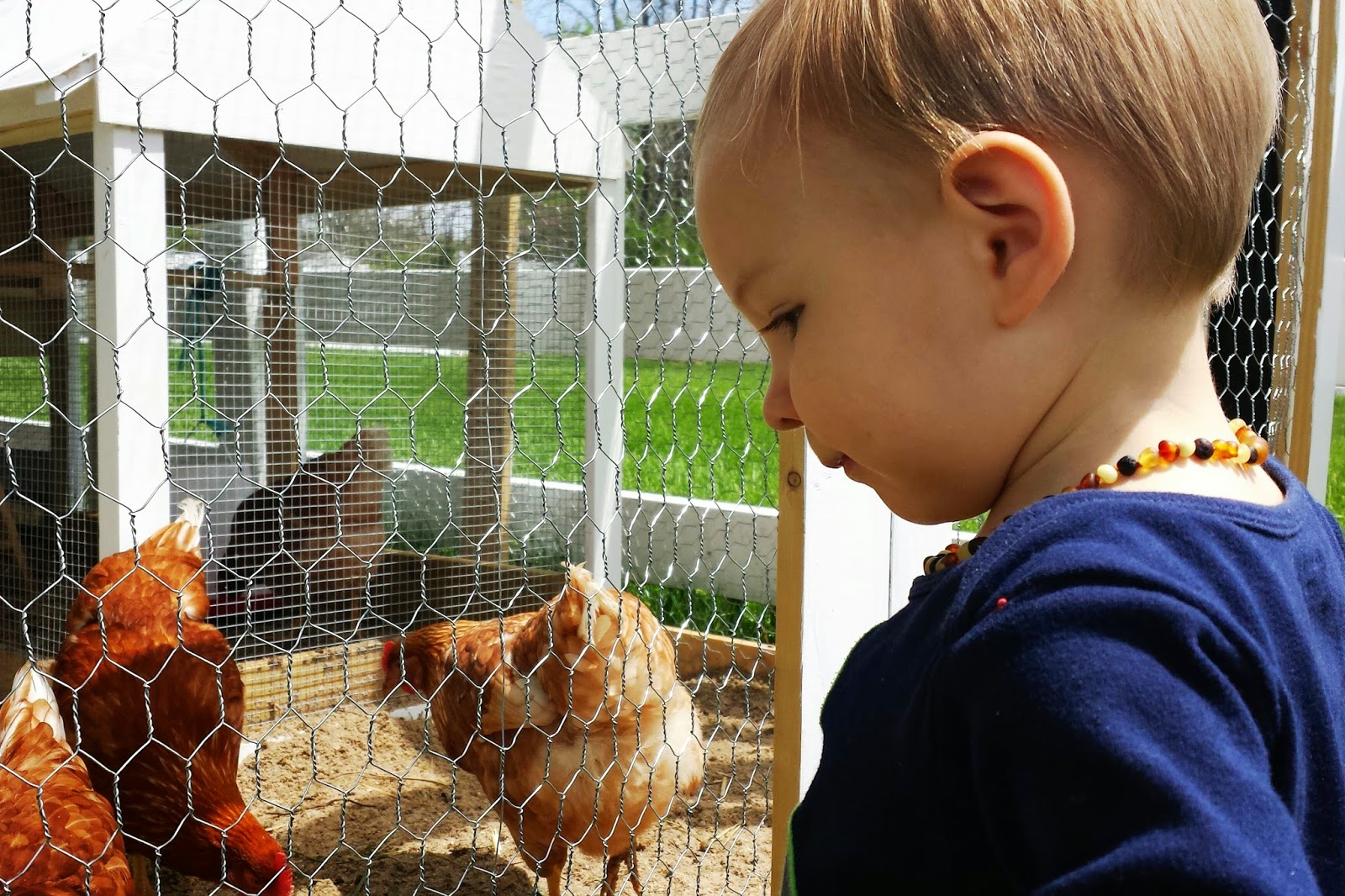 They are let out of the coop in the afternoons, and since Hannah is out at noon on Fridays, we've started a new Friday ritual in which we picnic with the chickens. Of course, this involves far more chicken chasing than picnicking. At first I worried about keeping the kids' fingers away from the bird beaks, but then one nibbled my toe, and since it just felt like a little pinch, I figured no big deal. Jacob has been nibbled a few times at this point, and he acknowledges the nibble with a "what the heck" face that fades pretty quickly.(I caught a nibble on video. Fair warning: it's another terribly shot vertical video.)

After watching a few of the big kids pick up the birds, Hannah wanted to give it a go. She picked one and followed it around for a long time, waiting for that perfect moment when she was close enough and brave enough to pick it up. After that she was a natural and just walked around picking them up at leisure. 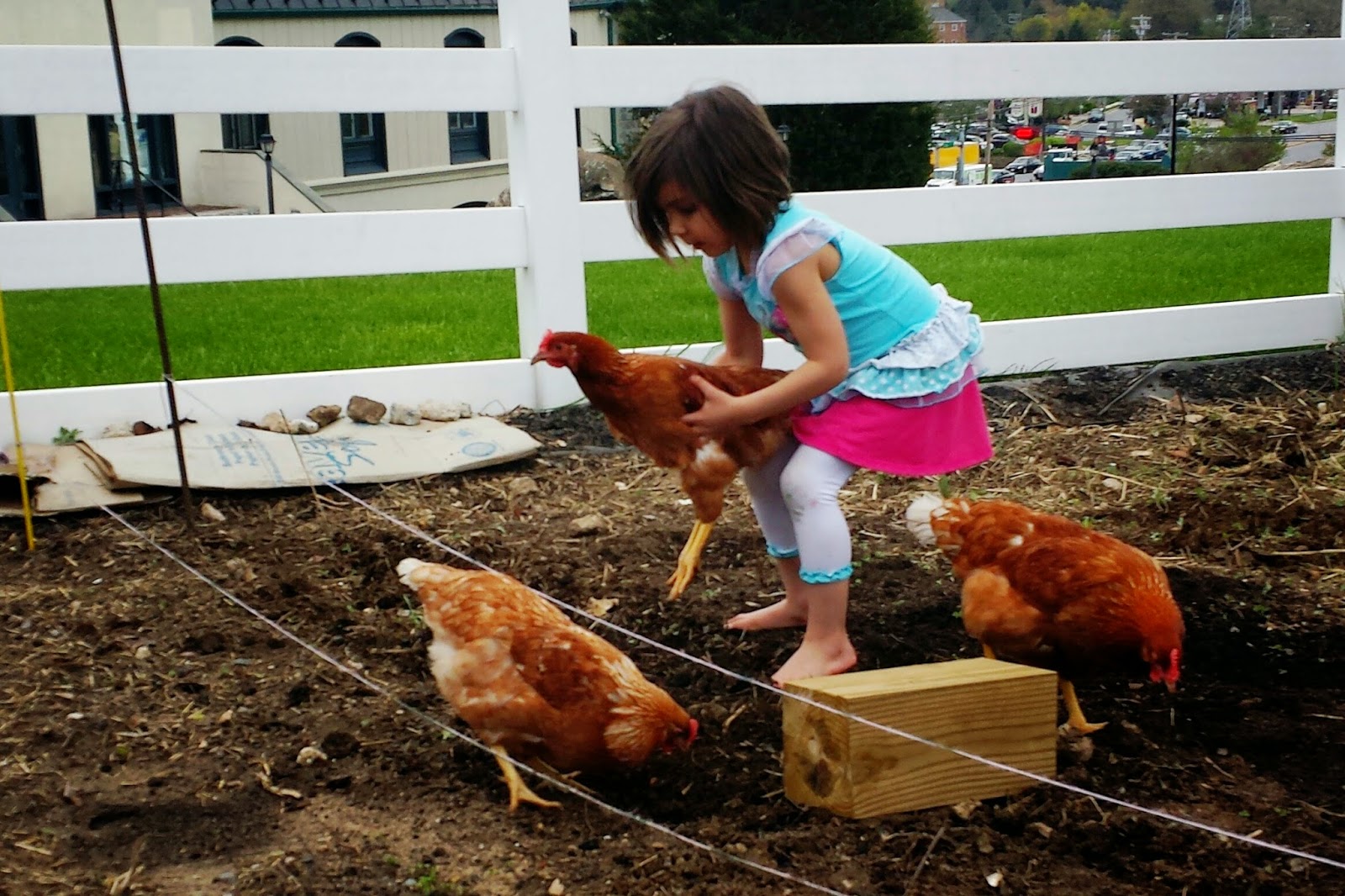 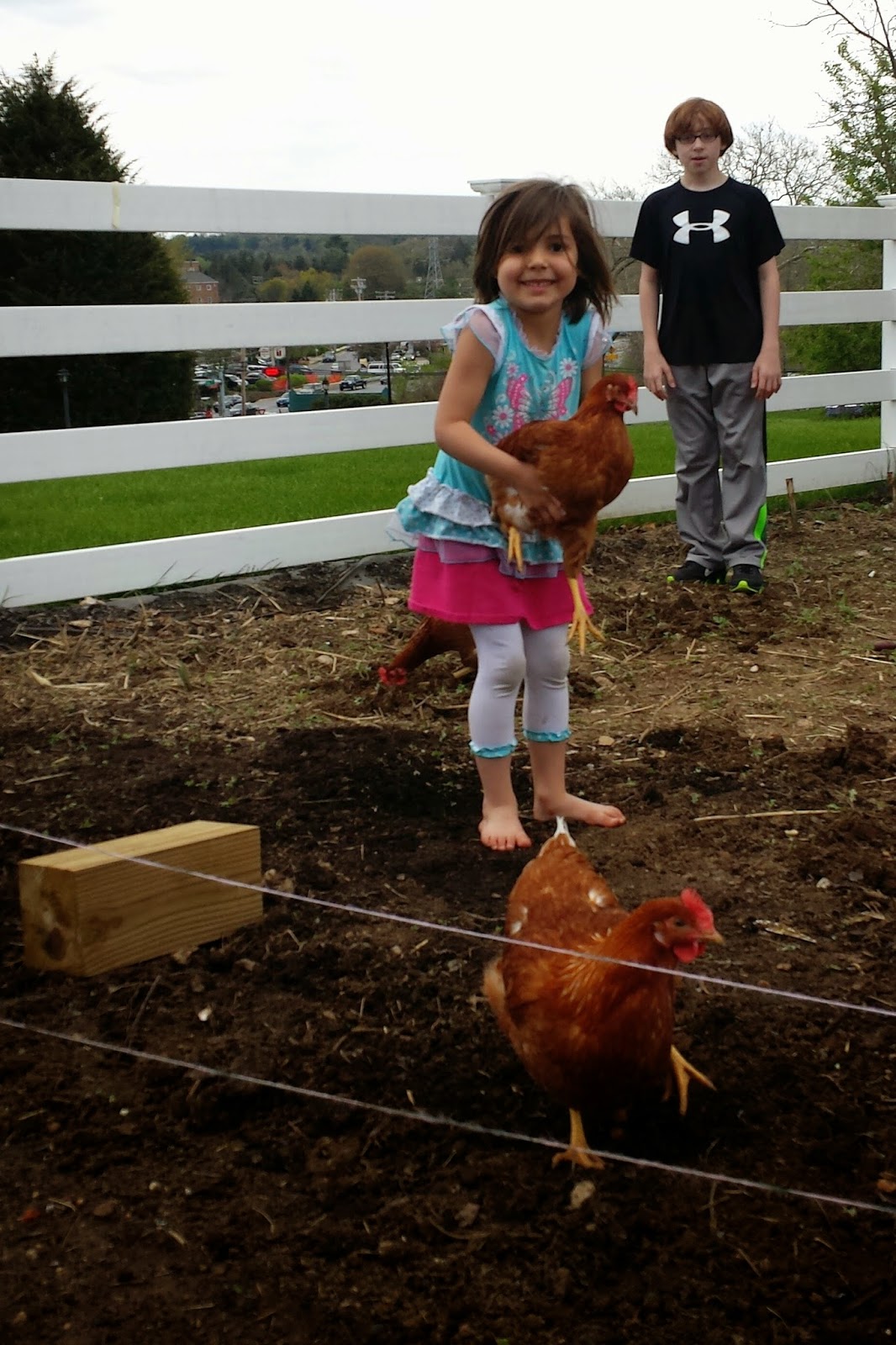 There is also a new family of adorable foxes living on the other side of the fence. Yes, convenient location for them. Potentially inconvenient for the chickens.... 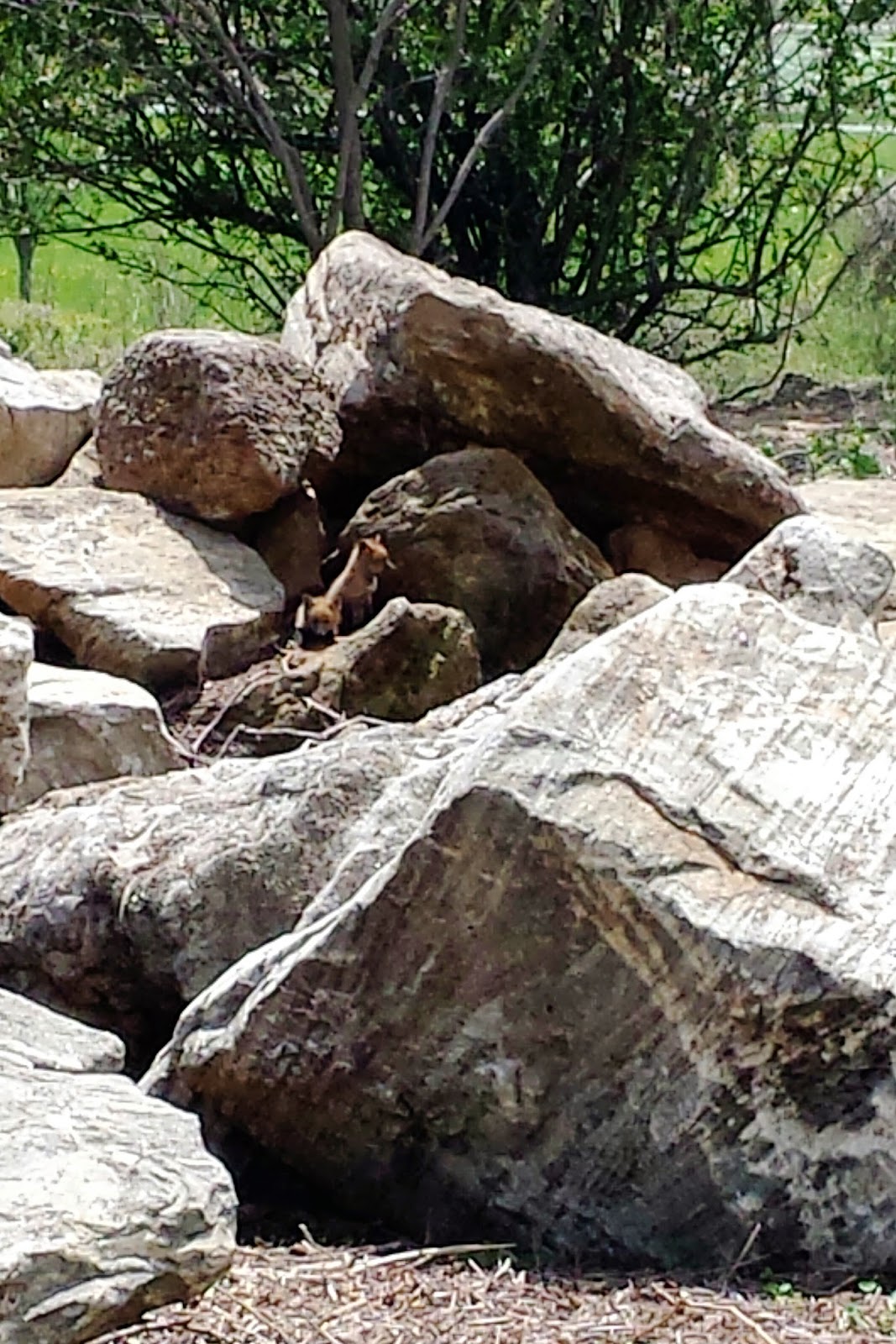 I love Hannah's school. We end up hanging out for an extra hour or more after I pick her up every day because the campus is so beautiful, and this amazing weather makes it hard to come home to this yard-less city row home. We want to be outside as much as possible right now, and since Jacob hates getting in his car seat and often requires an arm bar to get buckled, I try to avoid getting in and out of the car multiple trips. Anyway, he spends enough time in the car just taking Hannah to and from school, so there's no reason to add a destination to the trip. Fortunately, Hannah can't get enough of her school; even after being there all day, I still end up pulling her away kicking and screaming when it's time to come home and make dinner. I seriously love that she spends so much of her time in such an awesome environment and that she gets a daily respite from the concrete jungle.
Posted by terri at 9:23 PM No comments:

I'm interrupting my normal stream of backlogged posts to provide an update that is less than a week old: Jacob is walking. April 30 was the magical day that he went from taking one or two tentative and wobbly steps propelled primarily by momentum to taking about 10 steps. Every day since then, he has added steps and lost some wobble. I've tried a kabillion times to get video, but I always hit record either too late or too early and since I don't know how to edit video (and really don't feel like learning at this juncture in my life when I already have enough to obsess over), I end up scrapping the ones where I start too early. I did get a short clip on day three of walking that misses the first few steps but is better than nothing. You can watch it here if you are so inclined. Fair warning: like all my videos, it's really the kind of video that only grandparents and aunties would be even remotely interested in.

Speaking of boring videos, I have been uploading quite a few of them to my channel lately. A couple months ago, we were watching all the baby Hannah videos and realizing that there was a big gap in videos and that Jacob's baby years were all but lost, so I started to ramp up my game a bit. My only lament is that cell phone video cameras take horizontal video. Vertical video really sucks.
Posted by terri at 9:34 PM No comments:

Email ThisBlogThis!Share to TwitterShare to FacebookShare to Pinterest
Labels: milestones

On the hunt for eggs

An egg hunt is pretty much just a more elaborate game of hide-and-seek, one that eliminates the need for large people to squish themselves into small places and then stay there until small people find them. If, like me, you have a super small person, then the super small person has to hide with the large person and quickly gives away the hiding spot to the slightly larger small person. This is not a bad thing as it lessens the time spent crunched up uncomfortably. Still, I'd much rather hide eggs and follow the small person around the house as she locates them.

We went big this year with both an indoor and an outdoor egg hunt. I had bought an absurd amount of eggs and stuffed them with random items I picked up at the craft store like jewels that are flat on one end and can be glued down, jingle bells, small plastic animals, and coins from Eric's non-piggy bank. I put close to 30 eggs in a plastic bag to be hidden outside and hid at least 15 all around the house. Hannah knew about the outdoor hunt, but the indoor hunt was a surprise.

She ran around the house excitedly collecting eggs and even pointed out some to Jacob to help him grasp the concept. 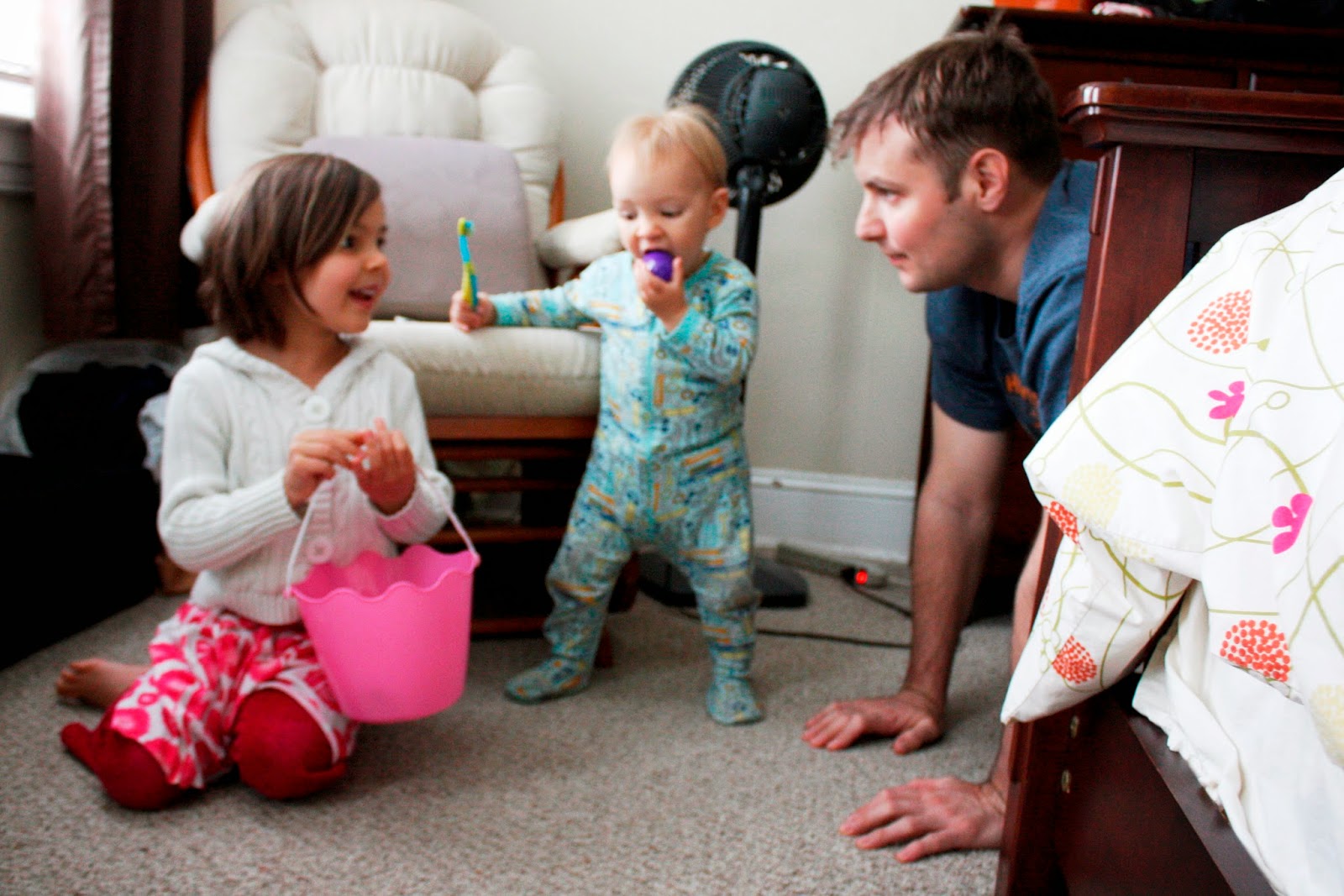 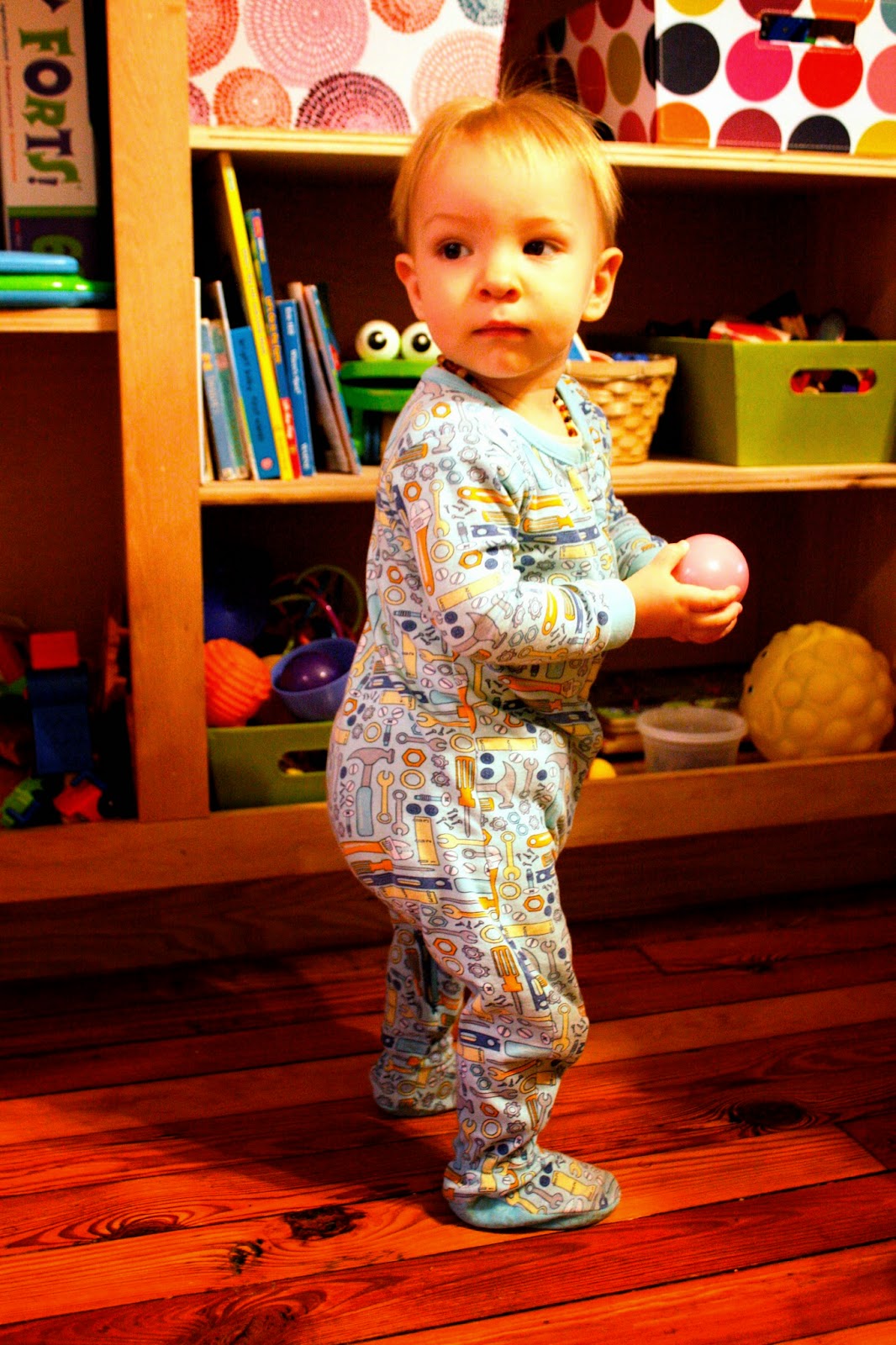 When they were all collected, she got to work inspecting her booty and organizing it Montessori-style into separate bowls which Jacob continuously knocked over and then thrashed around to make sure that each little jingle bell and jewel scattered far and wide. He is an excellent destroyer. 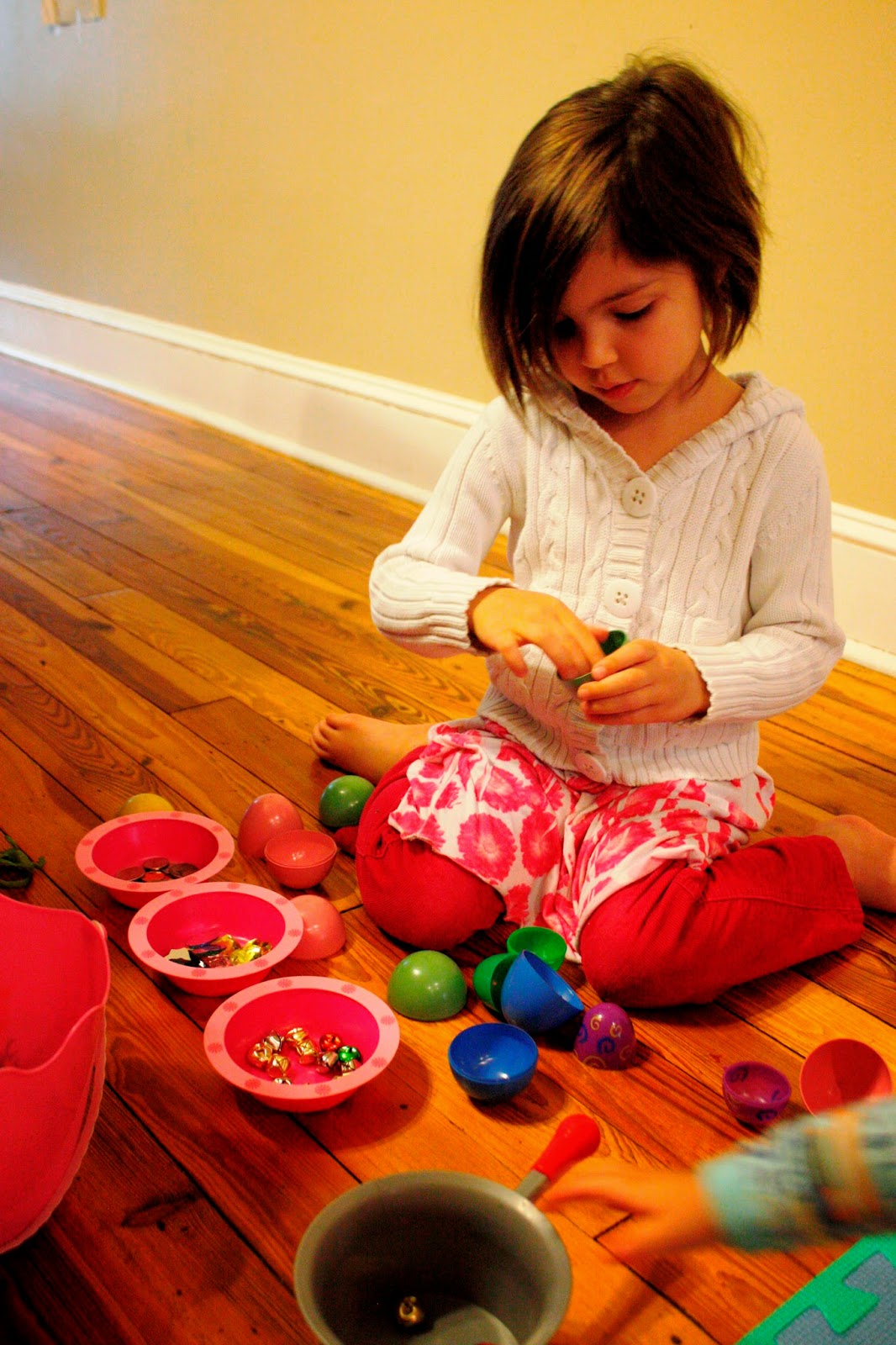 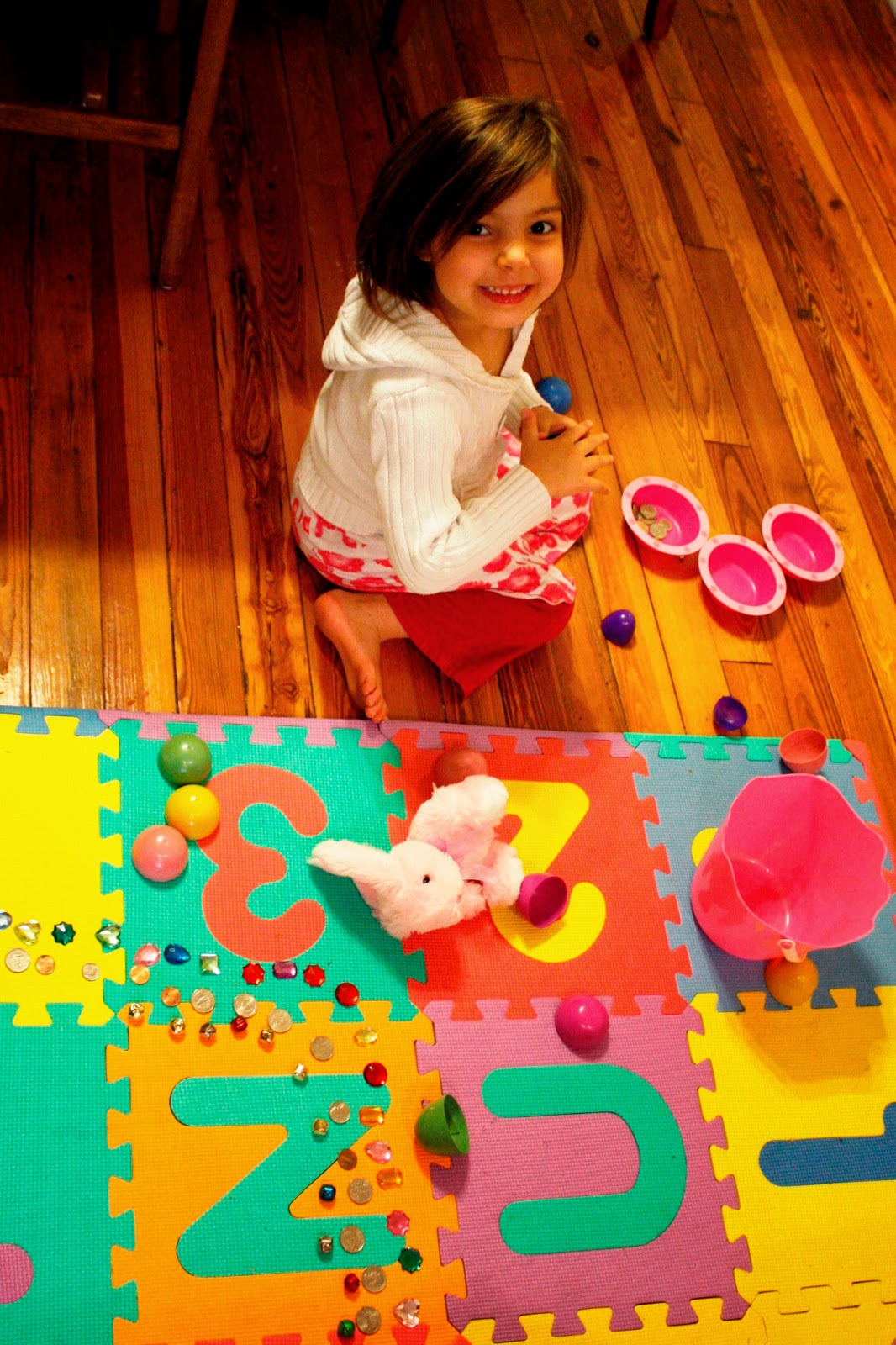 My dad and Sondra showed up around 10 bearing Jacob's birthday gift, and after enjoying it for a bit, we all went around back to meet our friends and commence egg hunt number two. The park in the alley behind our house is where we sledded a lot this winter. We had never thought to use it for an egg hunt, but fortunately a neighbor without kids shared her genius idea, and those of us with kids were all over it. There's not much there other than some grass, but that's pretty much all that's needed for an egg hunt. We rallied together with three other families with homes backing to that alley, all of whom have daughters around Hannah's age. Parents from each family hid the eggs around 10, and then the kids went crazy at 10:30. They aren't terribly visible in this shot, but I wanted to share a group action shot of the four of them spreading out to cover more territory. 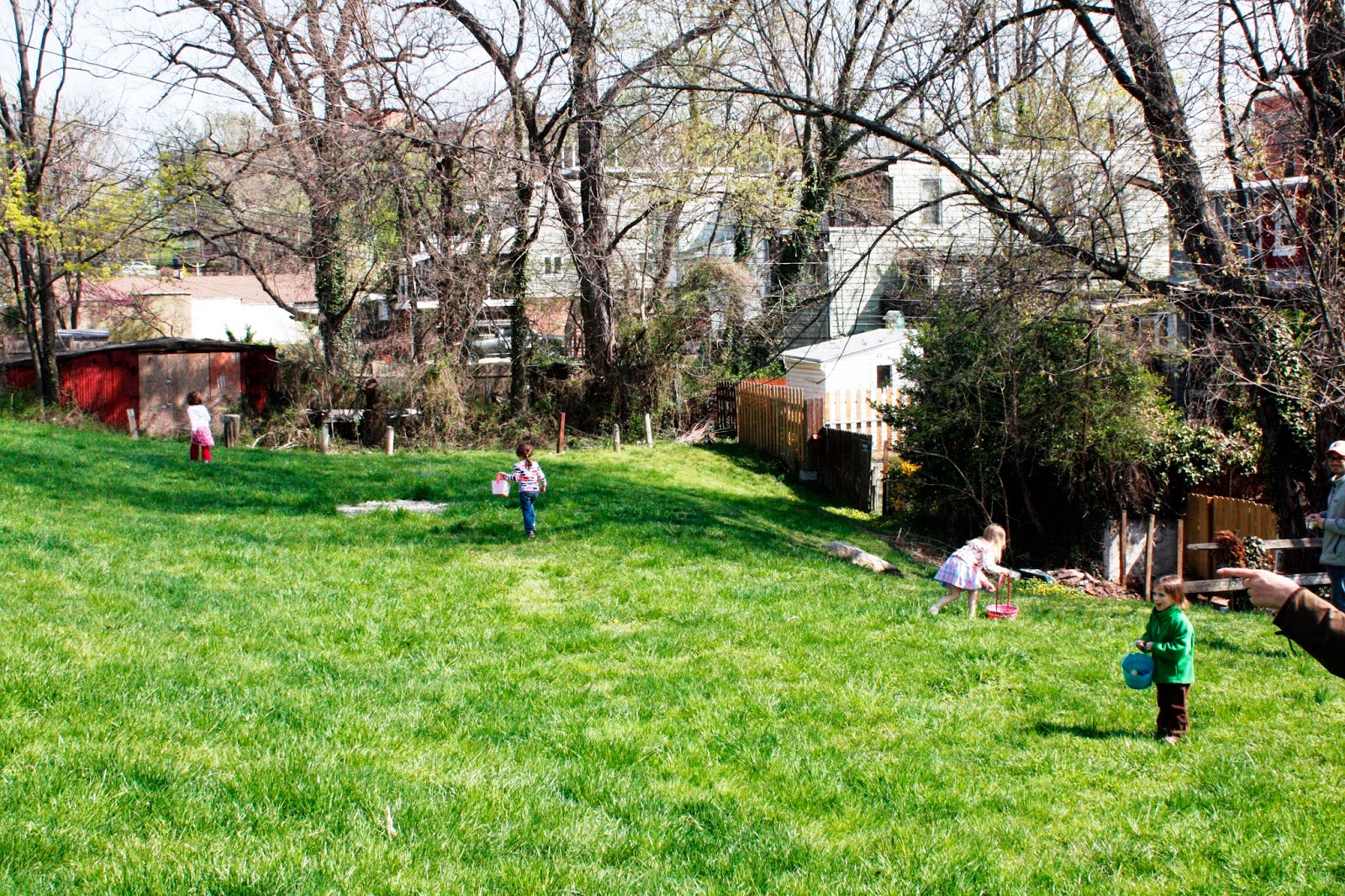 Jacob found a few too. 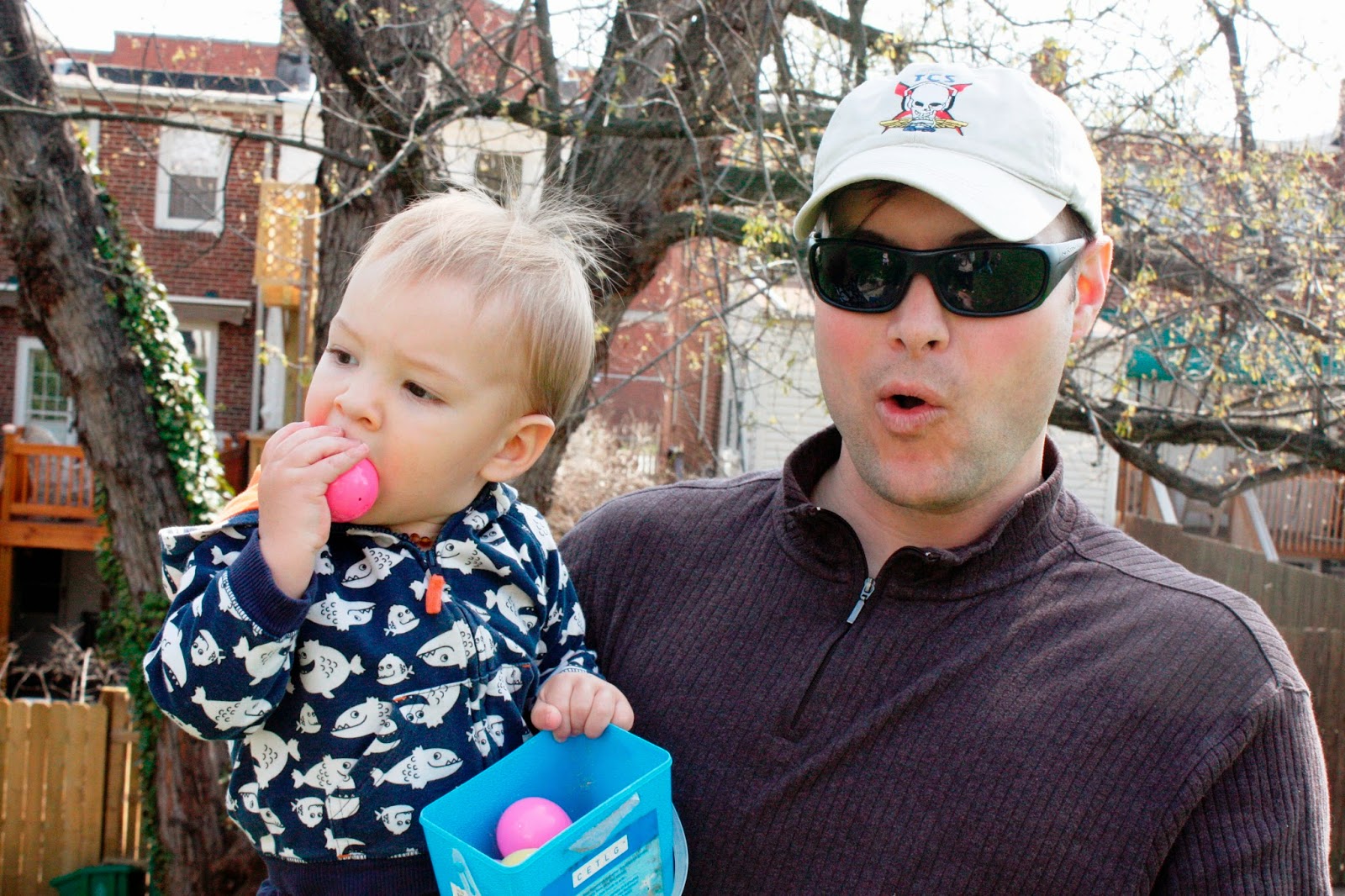 Running was the means of movement to each new egg as soon as it was spotted. I wish we were all like kids and just took off running at the drop of a hat. At what point do we stop running excitedly everywhere we go? 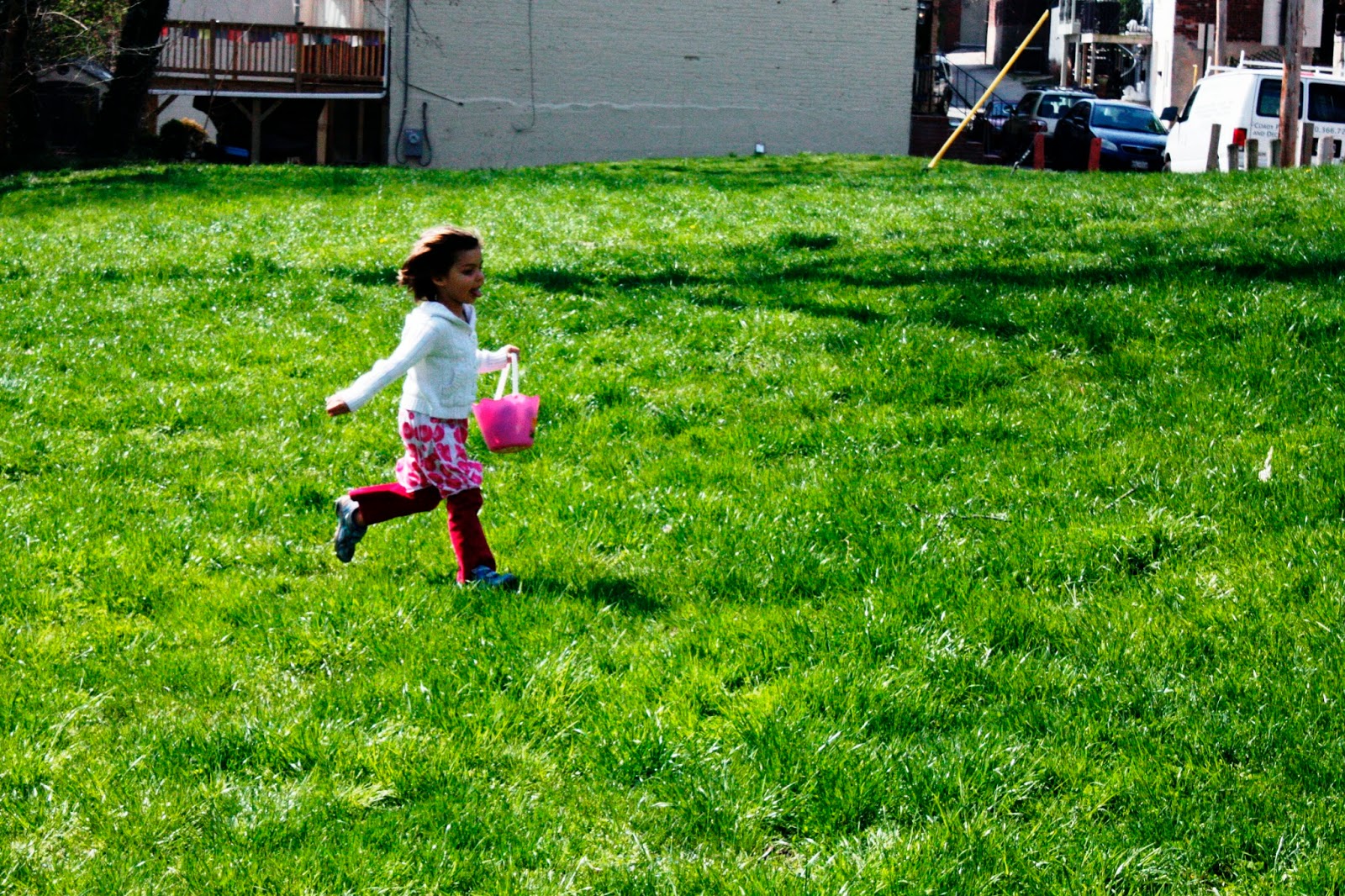 I couldn't pick my favorite posed group shot, but it's one of these two. 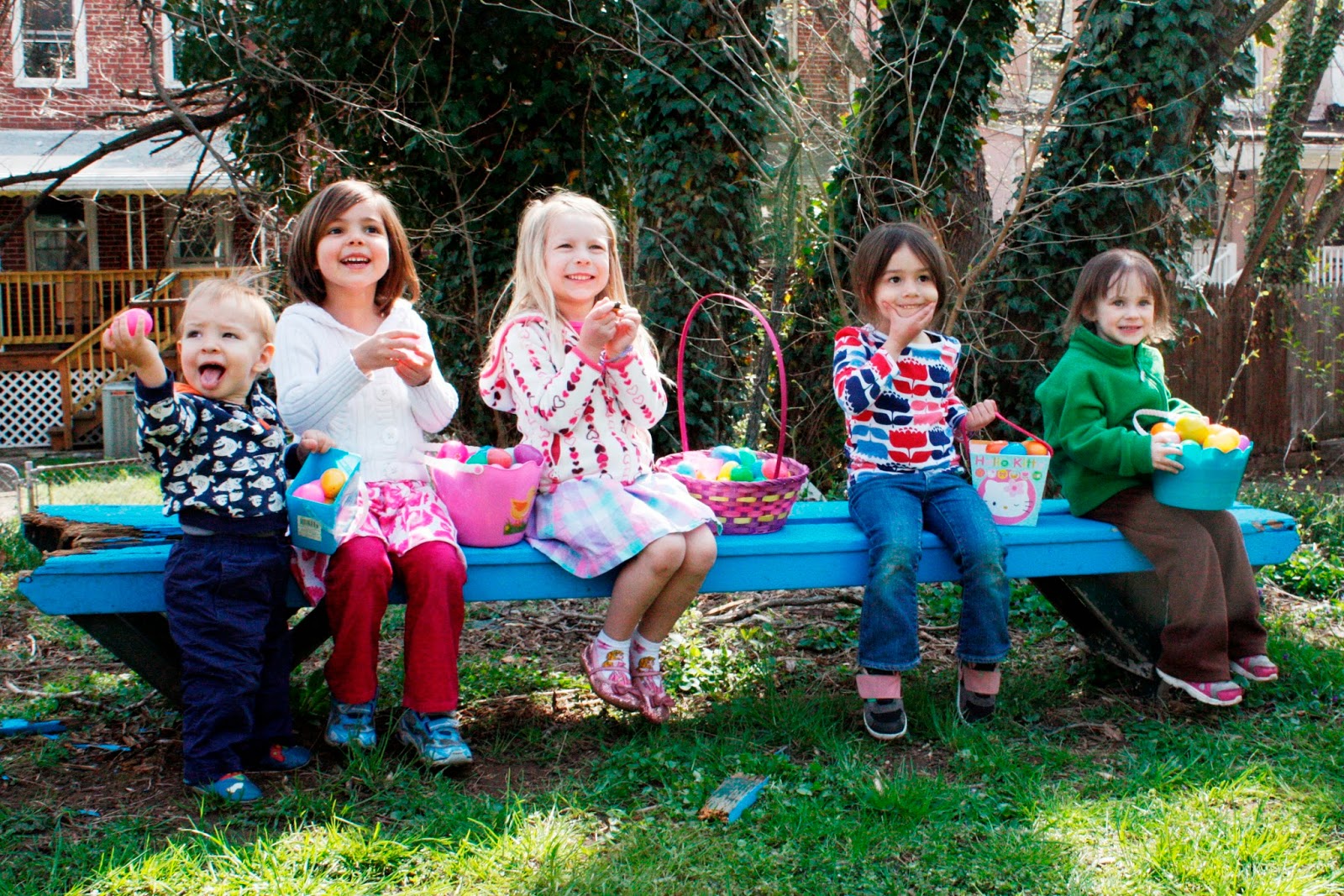 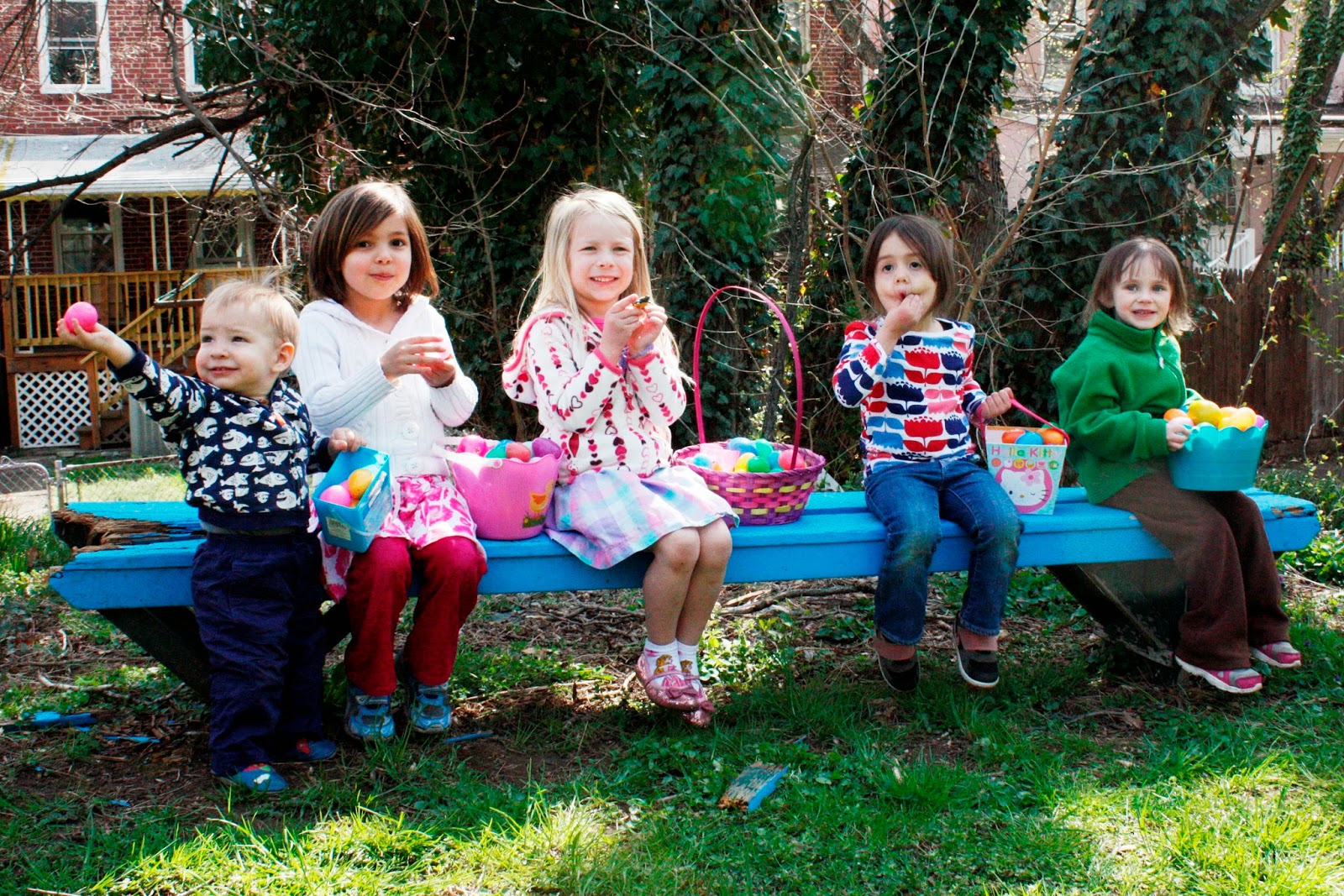 More post-egg hunt booty inspecting commenced while the parents mingled and enjoyed the amazing weather and the awesomeness of our neighborhood, specifically because of the people who live here. 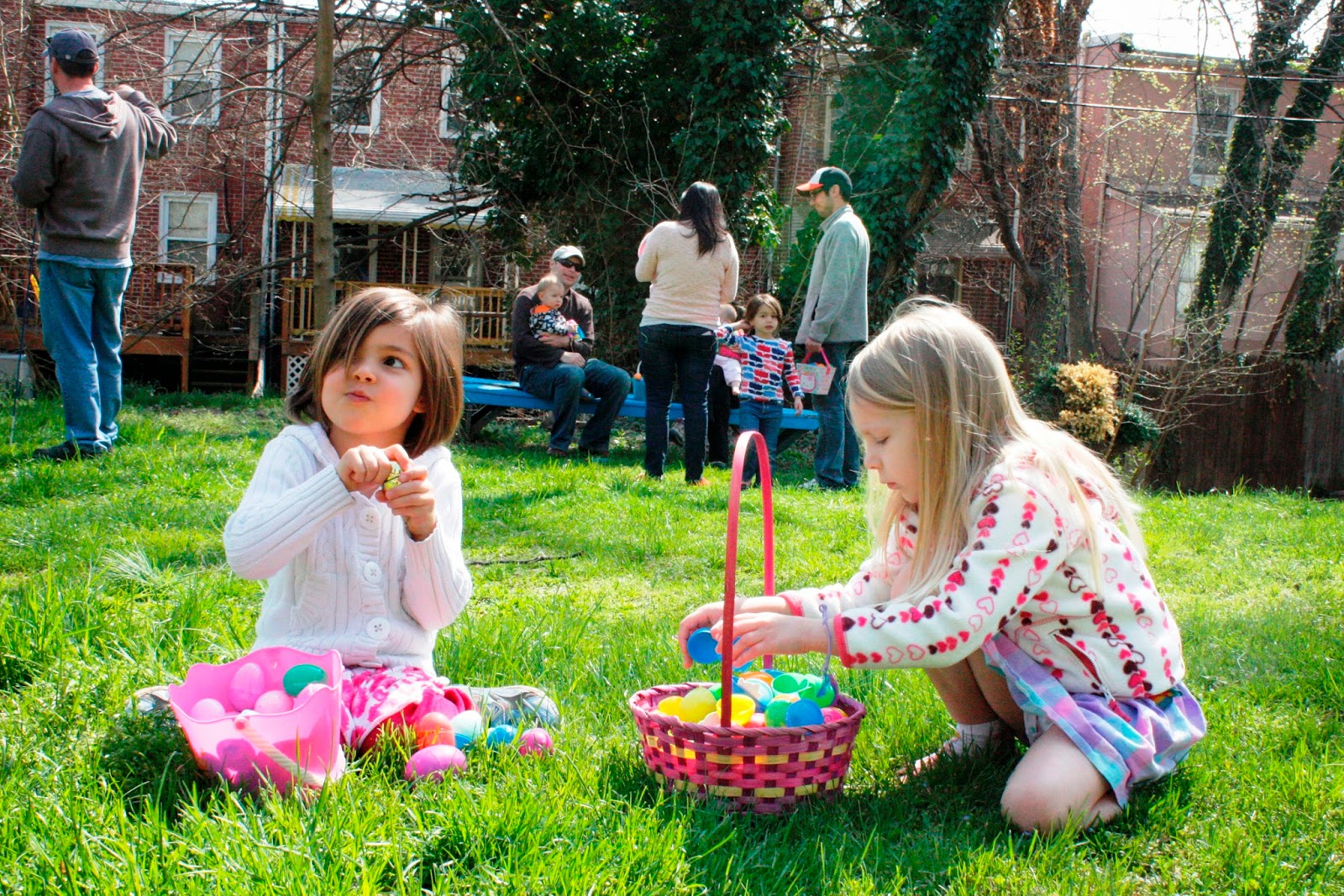 Having so many people around meant extra hands to snap family photos. 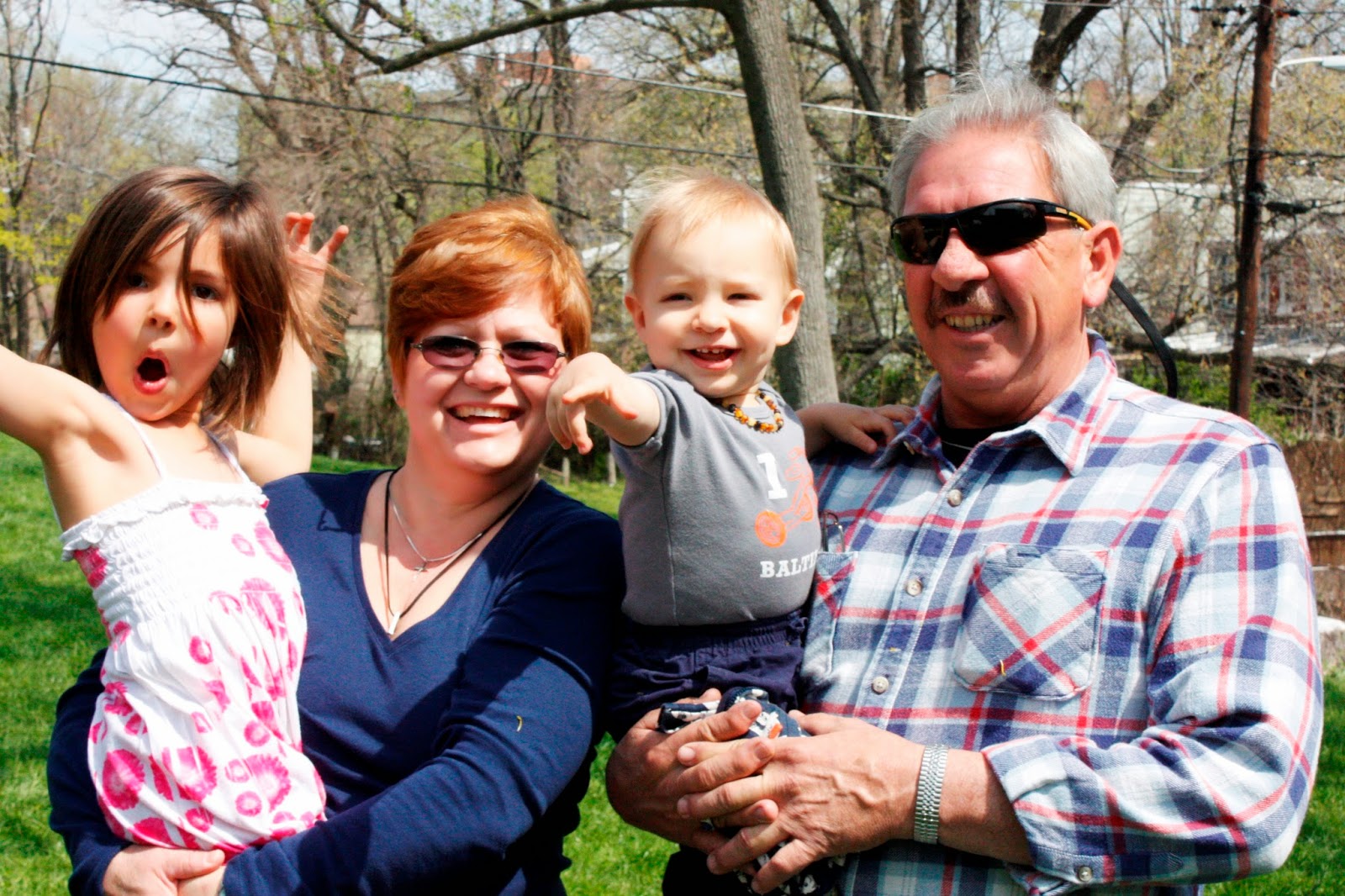 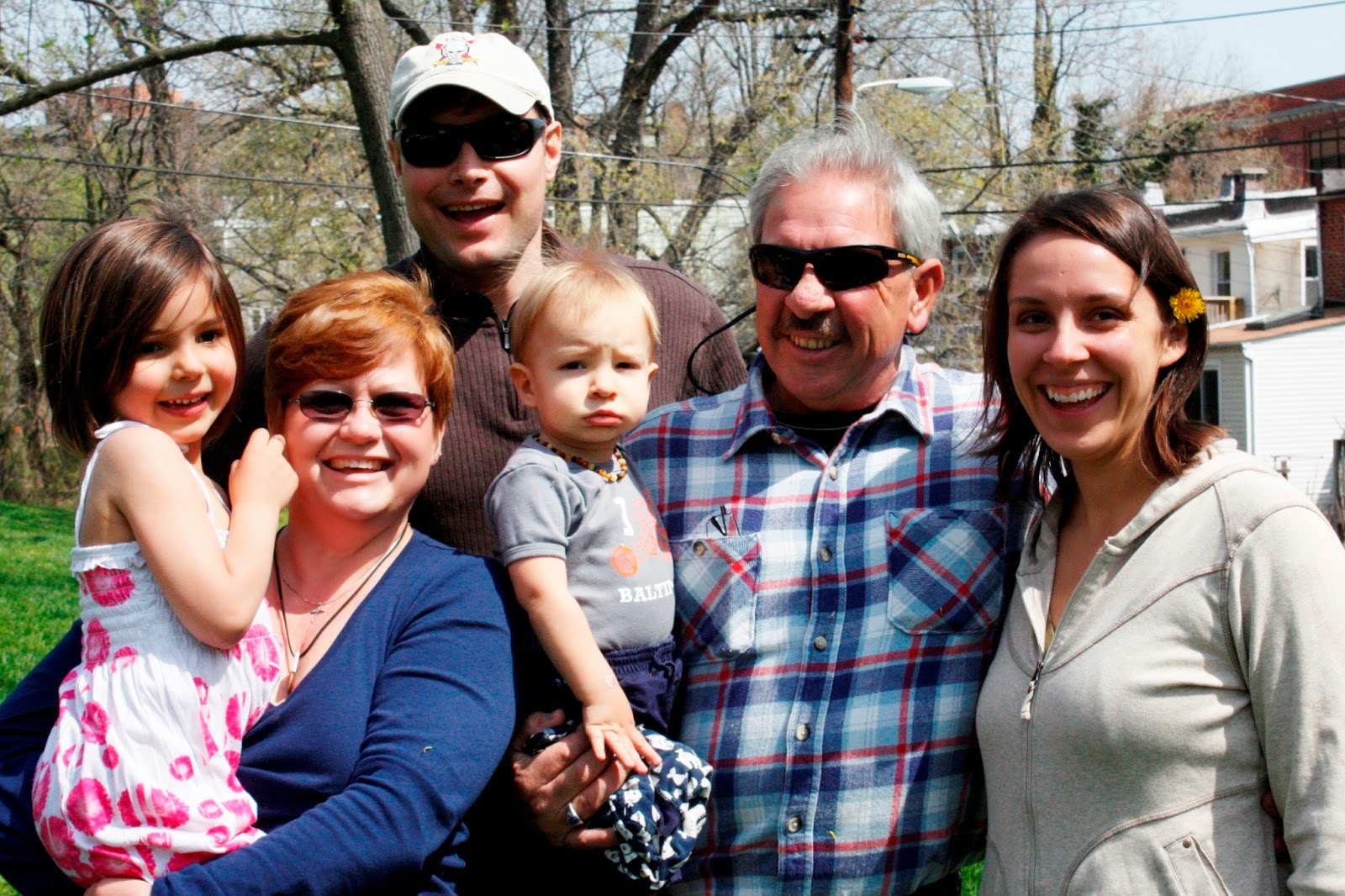 After the egg hunt we went to the bookstore where the kids each picked a book that the grandparents bought them. They're wanting this to be their new Easter tradition in lieu of giving the kids an Easter basket full of stuff I don't approve of and end up sending to work with Eric, and it's an idea I couldn't be happier with! Hannah picked out this hysterical book called Frankenstein Makes a Sandwich. It's pretty rad. Jacob picked Goodnight Spot, a lift-the-flap book. Brandy bought him Where's Spot for Christmas, and he loves it, so that warrants starting a collection.

Later we walked down to The Charmery for ice cream, which pretty much iced the cake of an awesome spring day.