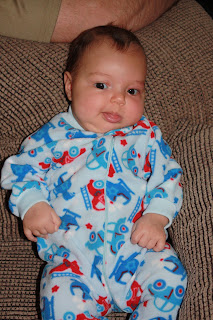 was going to take a pic of her in her "boy" outfit and post it on the blog with the title "cross dresser" and he cringed a little and said he preferred "tom boy." I know, I'm bad with a weird sense of humor.

When I was pregnant, I insisted that I didn't want Hannah wearing all pink and being dressed super girly because I didn't want to force her into a gender stereotype. Why is blue considered a boy color? And why are cars and baseballs considered boy designs??? So my mom heeded my preferences and bought a mix of items from the sale racks at Carter's (this piece being one of those items) which she sent me in care packages. And when friends of friends were handing down little boy clothes, I insisted on looking through them, after all, free clothes are free clothes. One of the friends of friends (Shannon's boss) told Shannon that I'd sing a different song once Hannah was born, that I wouldn't want her in "boy" clothes.

I must confess, she was a teeny bit right. Not because I get annoyed with people asking if she's a girl or boy (I don't), but just because it isn't as cute. Dang it! I've been brainwashed by society! Sigh. Anyway, we ended up with a lot of hand-me-downs so I passed some of the more boyish items on to my brother, and the ones I kept will probably not get worn on days when we go to the pediatrician or have other social engagements (even though I'm fine with showing up wearing my "uniform" which consists of one of two Glamour Mom nursing tanks--they're pricey so I only bought two but I haven't worn any other top since the day she was born so they seem to be paying for themselves--,a pair of sweats, and sweatshirt if it's cold).

Grannah sent Hannah some super cute fall clothes (clothes that strike the perfect balance of being cute for a little girl without being overly girly), but sadly, the Banana is a bit too large for them! She's a 12 pounder now so she is comfortable in most 3 month outfits except Gerber (their clothes are ridiculously small--she outgrew her Gerber newborn onesies in like a week).

Hannah is looking forward to returning the clothes and picking out basically the same things in a slightly larger size. We'll need her daddy for that trip though because mommy is not much of a shopper.
Posted by terri at 5:27 PM