I'm beginning my nearly year-old recap of last July with Hannah's Titanic moment on this boat we cruised around in last summer on July 4. We spent the holiday with some of Eric's friends/coworkers who own a house (and a boat) on the Chesapeake Bay. 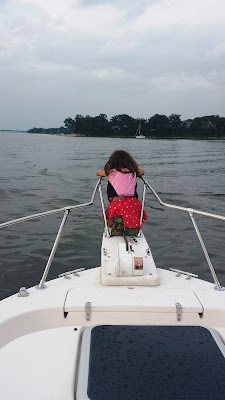 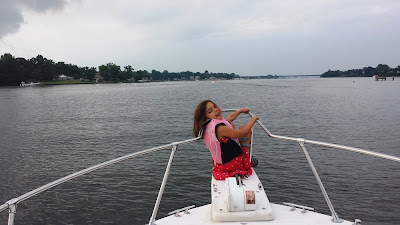 Atticus' birthday is the 5th so his celebration was next. We don't see them as much now that we've both left Hampden, so this was a welcome reunion for me! Shannon's sister was painting faces, and Hannah asked for a sunset. How awesome is this?? I love it. 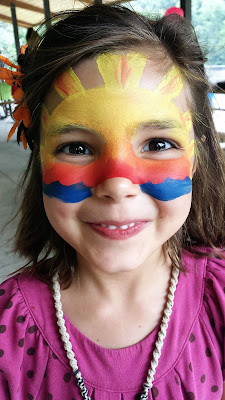 The parties simmered down for a bit then and Eric got back to work on the house. He'd borrowed his dad's power washer and intended to power wash everything in sight before returning it. This is him cleaning the driveway. The dark part is not just dark because it's a little wet--it's dirt. As you can see, power-washing made a HUGE difference. 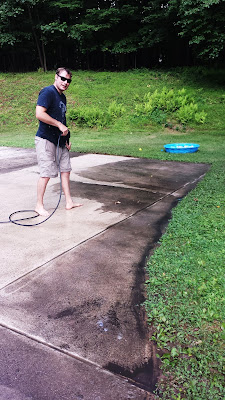 Then we bought a trampoline. We'd been looking at used trampolines on Craig's List and were planning to get one for around $100, but then we went to another July party where, in the span of one hour, two kids came off the trampoline with blood pouring out of their face. One of the kids had chipped a grown-up tooth. So we decided that safety needed to be more of a focus. We found this Magic Circle trampoline posted on Craig's List for $900 which was WAY out of our budget, but we looked it up online anyway and started researching it. It sounded amazing, and the one listed was only 2 years old with minimal use, but it was still too much money, so I emailed and told them that while I was sure that their asking price was fair, it wasn't within my budget and if they got desperate enough to unload it for $500, to let me know. They wrote back a week later and said they'd take $600, and I agreed. It was still way more than I wanted to spend, but it's been worth it. It's one thing the kids never get tired of, and us bigger kids have a lot of fun on it too. And no bloodbaths! 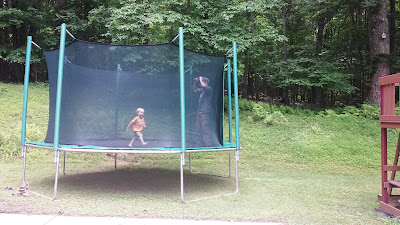 Then he turned the power washer to the pool. It ended up not being strong enough to get off much of the peeling paint, but it did a good initial clean. Eric borrowed a stronger model from our neighbor to get the peeling paint, and then he started looking into the price of pool paint and and the cost to fix some of the concrete cracks....and all of those things were enough to stop us in our tracks. The pool slowly began filling up with water again as it rained, and when fall hit, it filled with leaves, and then in April of this year, the frog's returned and resumed their yearly mating. So we're mostly back where we started, with a concrete pond, and we're thinking of keeping it like that...We've been researching natural swimming pools and are going to try to create one of those at some point. 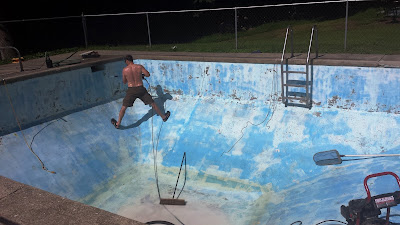 I found this bug on our grill cover and was totally fascinated by it. If you look at the profile picture, you can see the formidable probiscus (as it is so aptly described by Wikipedia).  It took me until just last week to finally name it. I was online trying to find the name of another bug, and I came across the Assassin Bug. This bug uses its formidable probiscus to stab it's prey and will stab a human too, sometimes repeatedly according to one of the sites I found, hence it's name. Needless to say, I left it alone even without knowing its name. 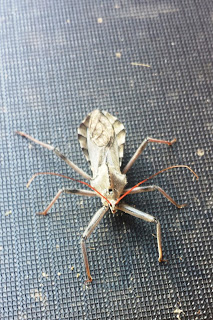 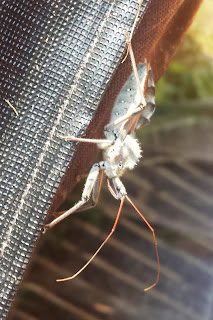 July is also when we started to demolish the basement. Step one was to tear out the wall that separated the room we were using for guests from another small room that had no windows and was useless as a result. Eric and Jacob are shown below on the site where I now sit typing at my desk, but we didn't finish the room until closer to the holidays so you'll have to wait to see those pictures since I'm a stickler for chronological order (and more so of one since I'm so far behind on posts). 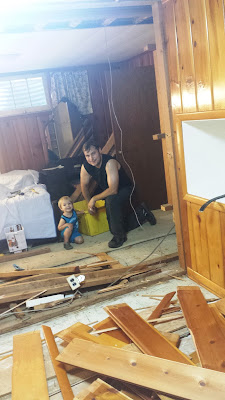 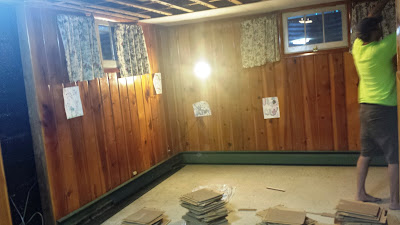 This is the view from the guest bedroom pat to the room that has no windows, which leads out into the laundry room. 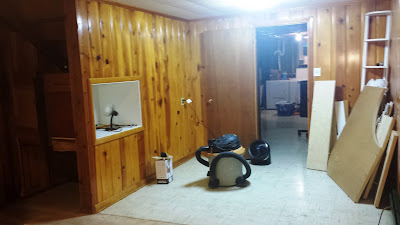 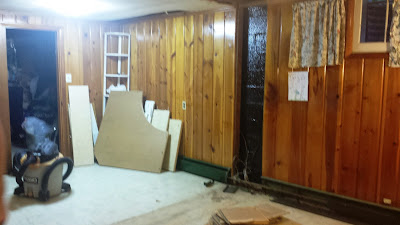 Now for a not-so-slick transition from basement demolition to sleeping babies...I never really took sleeping pictures of Hannah because getting her to actually go to sleep was such a painful process, that I never wanted to disturb her. She was also a very light sleeper, and rarely stayed asleep long so in the rare precious moments when she napped, I did not return to check on her. Jacob usually lays right down, pops his fingers in his mouth, and falls asleep. Every now and again he wants me to hang around for a few minutes, but as long as he has his lovey, he's usually fine. He was also a champion napper. I honestly have no idea how long he would sleep if I let him; I usually woke him up after 2 hours. When he started pushing his bedtime back to 9:00, I started waking him up after only 1 hour. And sometime over the winter he dropped the nap altogether. 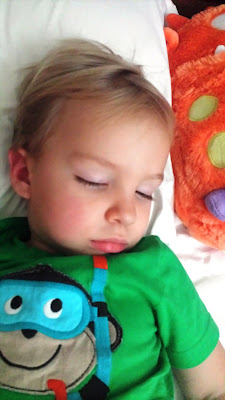 We had a super lucky day at the Aquarium in July where we happened to head to the rain forest (we don't always go everywhere since we go pretty frequently) and the sloths happened to be incredibly active. We hung out in the canopy and stared with awe and delight as he climbed all over the ceiling and trees and came very close to where we were. One of the staff members said she had never seen the sloth so active in all her years there. It was a total sloth jackpot. 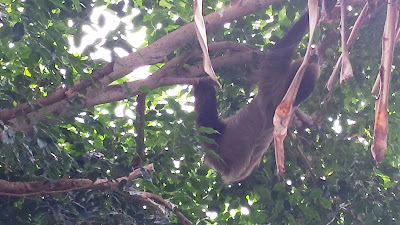 We always stop to play at Pierce Park on our way back to our car which I always park in Little Italy. This willow tunnel is a favorite, and I'm hoping Eric can build us one here some day. 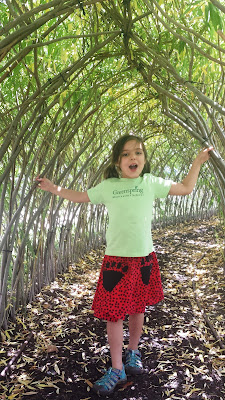 Closer to the end of July we found ourselves at Oregon Ridge celebrating Ronan's 6th birthday with him at Oregon Ridge's Mud Day. Hannah loved it and did everything she could to win the muddiest kid prize. 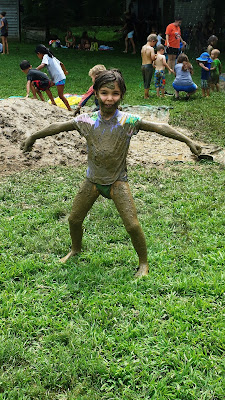 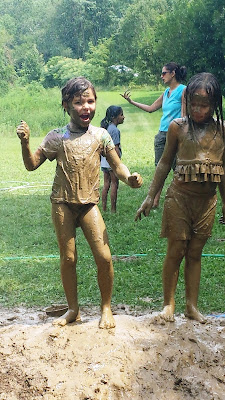 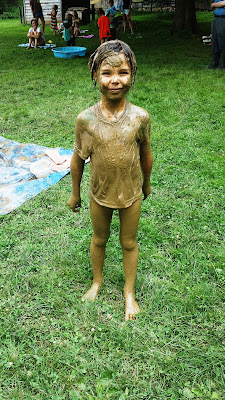 I think she came pretty close to winning, but as you can see, the girl to her right looked as if she'd dove into a mud puddle head first. She was literally covered from head tow, so she won the crown. 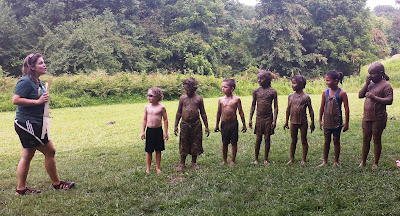 Then it came time to remove the mud, and that's where things got hairy. The water coming out of the hose was cold, obviously. Hannah HATES cold water.  A lot. It's why we can't join the YMCA even though we'd love to. Her lips turn blue in any water that isn't kept pretty close to body temperature. So she freaked out when I sprayed her. I opted to leave her muddy and head back to another birthday party where we'd left Eric. She bundled up in her towel in the car, covered in mud and chattering from the cold. Eric managed to hose her off a bit better at the party, but again, the water was cold. We headed home then and put her in the shower, and I'm pretty certain that she will never again get that muddy. The cleaning up part was pretty traumatizing and not worth it. I told her this year if she wanted, she could just play in it with her feet and maybe even sit it, but maybe not put it on her face and in her hair...

The rest of these are just some pictures of our woods in July. None of them is terribly good, and all are a bit bleached out at the top, but I'm posting them anyway for posterity's sake and because I love watching the seasons come and go here. Summer is when the ferns and skunk cabbage take over everything, including our trails. 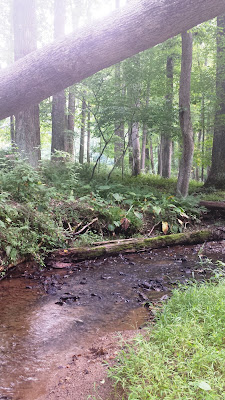 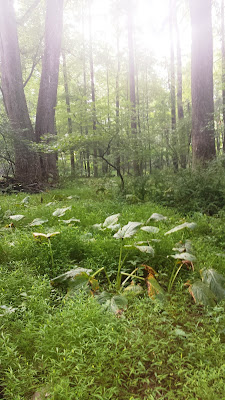 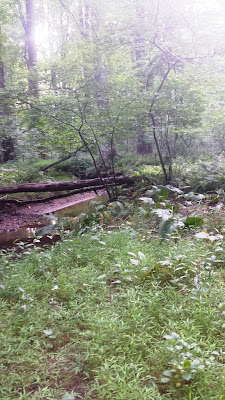 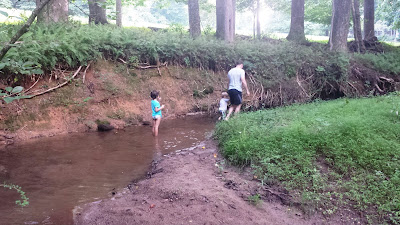 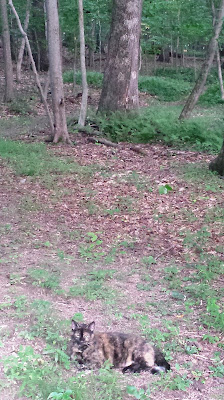