The Yin and Yang of Swim Class

As Grannah pointed out in a comment on a previous post, I haven't mentioned swim class since the first one so an update is in order.  Swimming is hands down my favorite Hannah activity in the universe.  She very obviously loves the water and has taken to frog kicking around while on her belly.  She doesn't love floating on her back as much and will only do so for a couple of seconds before wiggling herself back to her belly and resuming her happy little frog kick. While the other kids hang on to their moms (and one grandmother) with their legs on either side of the hips (like the normal way you'd hold a kid out of the water), Hannah refuses the cuddle hold preferring instead to be floating and kicking around on her stomach.  When the instructor has us blow bubbles, she licks the water.  When he has us do 1, 2, 3 blast off! which ends with an underwater dunk, she comes up looking slightly confused and then quickly resumes her happy frog kick.  When he has the kids sit on the side and kick, she watches the other kids intently (her feet don't reach the water), and when he has them jump in, she happily falls into my arms back into the water. If there's a ball  nearby, she'll push it all over the pool. If there's another kid smiling and splashing, she smiles and splashes back.  Today, I forget what the instructor was having her do, but he said to her, "You're fearless! You're going to be dangerous in the water!"  And for some reason, I took great pride in that.  I think he's right. We're going to have to make sure she's a good swimmer and that we watch her like a hawk.  This is reminding me of this little boy in the preschool swim classes I helped to teach during my summers as a lifeguard in high school.  This kid was super cute with a head of hair the color of Strawberry Shortcake's and a round little face full of freckles.  He never talked, but he was always smiling really big.  This kid had NO fear whatsoever.  He would just run and jump into the water and go down like a brick if you weren't watching.  Fortunately, we figured him out early on and we were always watching so even when he made it into the water, somebody dove in right after him to bring him up.  And it never scared him to go plummeting below the water like that. I'm not exaggerating when I say he sunk like a brick--he had one of those bodies  that just doesn't float.  He even went off the diving board with just as much enthusiasm.  I feel like that's how Hannah will be (minus the part about not talking--she is, after all, a child of mine and will therefore probably have the gift of gab).

Since Hannah is super freakin cute and also the youngest in the class, she gets a lot of attention from the older ladies doing their water aerobics nearby.  Today one of them asked me, "Does she ever cry?"  I thought she meant in the water so I said, "Yeah, she cried during the first class."  And she said, "No, I mean ever. Does she ever cry?"  I was like, "Ummm, YEAH. A LOT." I told her that swim class was our safe little happy place.  Later, in the locker room, Hannah screamed like she'd been abandoned in the middle of a buzzing L.A. freeway. It was so loud that I'm pretty sure the whole gym heard, and probably even the customers at the Target a mile down the road so that probably answered that lady's question.

Swim class: love.  Locker room: hate.  I put my suit on before we go but I don't change her till we get there.  I thought about changing her at home, but I don't want her swim diaper to be full before we even arrive.  So I find us a nice little spot in the locker room, lay her on a towel on the floor, change her as quickly as possible, and then slip out of my slide-on Merrill's and yoga pants lickety split.  But no matter how fast I am, she screams. Loudly. The post-swim class change, is way worse.  I have to get both of us out of our wet suits and into dry clothes AND since we just got out of a nice warm pool (it's heated to bathtub temperatures), the air outside the water feels cold.  I put it in super speedracer gear, wrap Hannah in her towel and lay her on top of another towel on the floor and then put my towel over her as more warmth before getting her from wet to dry but she's screaming the whole time like I'm pinching her while I'm doing it or something (I'm not, I promise).  Then, when she's nice and warm, I sit her up on the floor beside me, hand her my keys or some other toy, take back my towel, and strip from wet suit to dry clothes as fast as anyone is able to peel a soaking wet suit from themselves.  The whole time I'm doing this she's screaming and screaming and screaming at the very tip top of her lungs and women are glancing over as if to see what I could possibly be doing to her to make her scream like that and they're probably also wondering what kind of a nut job brings a baby swimming, but she's screaming so loud that when it's happening, I don't care about them, I just keep saying "I'm hurrying Hannah, I promise. It's okay. Everything's okay. I promise."  I dunno why I feel the need to continuously promise her this, but I do.

When this 6 week course is over, I'm not going to sign her up again, at least not right away.  The locker room fiasco is too much to do alone. If we were going to do it again, I'd have to do it at a time when Eric could be there to help.  By help, I mean hold her while I'm getting dressed because for some reason, she refuses to not be held in a number of situations.  Here's another one: while I'm making dinner.  Breakfast, yes. Lunch, sometimes. Dinner, never.  Today I was starving and she'd done well at lunch so I decided to give it a try but she refused to sit in her Jeep, her highchair, or on a blanket I had laid on the floor and piled high with toys as a last ditch effort. She screamed the whole time. I was thinking that it's kind of like what she does at night, and since I sit close by at night while she does this (I've started the Sleep Lady Shuffle again) and attempt to soothe her with my voice, that maybe I should treat other points in the day similarly where instead of always giving in and just picking her up, I stay close and talk reassuringly until she calms down. Please note, this takes me an hour at bedtime so if I were to start doing this throughout the day, that would be 4+ hours of standing by patiently while my daughter kirks out at top decibels.  I'm not saint or anything close so I'm pretty sure this would send me over the top and straight into the padded room. Regardless, I tried it anyway because I really wanted to just get dinner prepped, but I couldn't deal. I don't know why, but the screaming grated my nerves even more than usual and I must confess that I yelled at her at one point screaming "what do you want from me??? I'm HUNGRY and I want to make dinner and I need you to stop YELLING at me!!"  As you might have guessed, that did not help the situation.....So I picked her up and resumed one-handed cooking (difficult to do when attempting to stir up potatoes that are roasting in the oven and toss raw hamburger meat into a very heavy cast iron skillet).  You know how the cliche post-partum thing to say is "I just wanted to throw the baby out the window"? Well, I can honestly say that I have never had any of those feelings toward Hannah, even in a "but I wouldn't really do it" way, but I have had them for myself.  When super stressed like that, I want to throw MYSELF out of a window.  But in a "I wouldn't really do that way," so don't go getting all worried on me. I'm not suicidal--just dramatic.


But the main reason that I will probably not sign her up again is that we do basically the same stuff each week and it's all stuff that we can just do with her on our own. No need to pay to participate in a class. We'll just set a weekly time and have our own private swim class.

To ease your poor, tired eyes from this text heavy post, here's a pic of Hannah eating the cute little tye-dye socks that Jess gave her for Christmas.  And YES, they're clean.  (Sort of.) 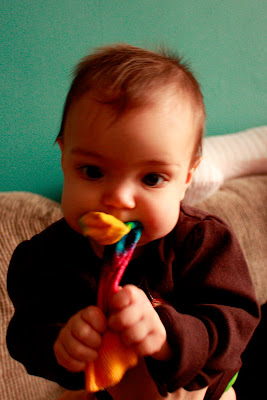 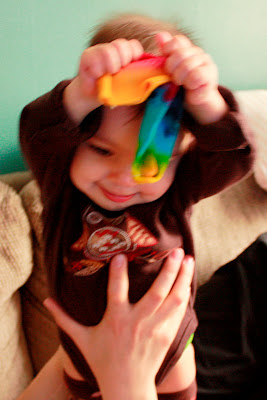