6-Month Checkup Stats and other Stories

Hannah had her 6-month checkup today.  Yeah, yeah, we're a month late.  I thought I'd made appointments for the 2-, 4-, and 6-month checkups at the same time and didn't realize there was nothing on my calendar for 6 months until the end of the 5th month.  I guess her pediatrician is super busy and popular because they couldn't fit us in until today.  She got the third round of her vaccines and cried way less than the first two rounds which was nice because her appointment was during her afternoon nap (1:30) which means she was exhausted and then to have poked her little legs all up and THEN stick her in a car to head back down I-83....That was a potential disaster for my car-hating loudmouth of a daughter.  But she sat back there playing with the car seat toy that Sondra and my Dad brought up to her this weekend, cooing contently. Whew!! That thing is a big hit. I still don't think it's enough to get us to Tennessee though--I think we need an RV for that kind of a haul--but at least I can get around town now without ear plugs.

This morning Hannah slept late until 7:30 and upon waking, immediately pulled herself into a standing position. I know she did that after her nap on Sunday, but it was somehow more momentous first thing in the morning....so I had to grab the camera, again.  Her and that tongue.... 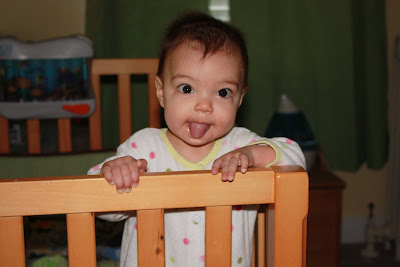 She did it again this afternoon when I tried to lay her down for a very late afternoon nap. Instead of sleeping, she was standing. I decided she needed to learn how to get back down by herself, and anyway, it was nap time, so I left her like that for a while. Eventually she was kinda slouched over so I went up, rearranged her, and left, but she immediately pulled back up into standing.  She's got it figured out now and can do it in no time.  I told the pediatrician that and she said that Hannah would be walking in no time....I'm sure it'll still be a while (hopefully), and in the meantime, I have my hands full with her constant squirming.  Today we were sitting on the couch and she started pulling stuff off the end table and shoving it into her mouth.  First the sleep log (which she's tried to eat on many occasions), then Eric's magazine, then my yogi figurine. I just kept taking stuff until there was nothing left on the table and then I put some toys there.  Those weren't nearly as interesting though. Paper products are her favorite.  Today in Whole Foods, she screamed throughout the store because I wouldn't let her eat my grocery list. I had a bag full of toys that she had zero interest in.  If I diverted my gaze for a second to look at an item, she was leaned over and shoveling the list into her mouth before I knew what hit me.  Then I'd take it and the screaming would commence.  Is there any healthy paper out there that babies can eat???? I need a paper food product....Side note: Hannah rode in the cart yesterday for the very first time (at Target) and today for the second time (at Whole Foods).  She likes it for a couple minutes but then insists on being picked up.

That was a tangent. Back to squirmy Hannah.  Changing diapers has become an athletic event requiring dexterity, endurance, and quick thinking.  Here's another area that as a pre-mama, I assumed I would have under control.   I remember the days of acrobatic diaper changing from my years and years of babysitting, and I specifically remember thinking about that when pregnant and deciding that my baby would sit still for the 2 minutes it took to change her diaper.  It would be as easy as remaining calm and gently but firmly asking her to sit still for a moment.  I tried that the other day. The results were less than effective.  So I changed tactics and decided to become an expert at putting on diapers upside down (she likes to flip over onto her belly and get on all fours) and dressing her that way as well.  The only thing I can't do from that position is zip or snap her outfit.  Since I took the camera with me when I went to get her this morning, I paused in my attempts at changing her and snapped a few pics. She should sleep late more often--she was full of energy this morning. 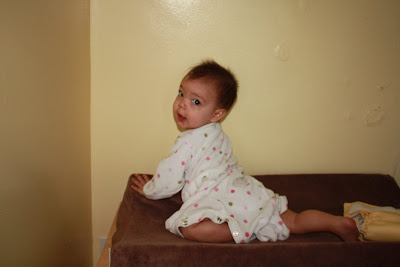 Now that I've got you walking through her morning routine...After I change and nurse her, I make the bed and put her on it with her floor toy thingy and a couple of other toys while I get dressed and do my stretches. 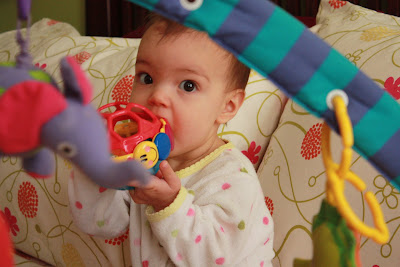 I don't know what she's tripping out on in this one... 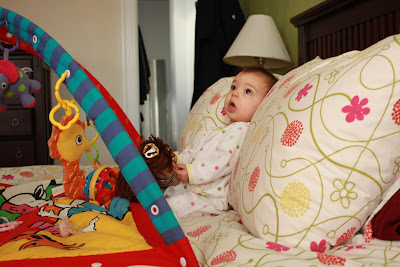 Her weight was cause for a teeny bit of concern because the charts show it going in a curve and it should always curve up (weight corresponding with growth), but this time the dot she made, if connected to the one before, would show the curve going down.  Her weight is still toward the top of the chart and well above the average in her age group, but it just hasn't accelerated the way that it was accelerating.  So we talked about that briefly and I explained that sometimes Hannah will only nurse for 3-5 minutes at a time (despite me not allowing her to snack), just enough to tide her over so she can get on with her day.  She's eager to get on with playing and exploring and moving, and more so than that, she's eager to play with Daddy.  We've got a new rule now where when it's time for Hannah to nurse, Eric has to leave the room and remain very quiet because otherwise, Hannah won't eat.  She is such a daddy's girl that she would rather starve in his arms than be away from him for one second that he's home.  Don't worry, my feelings aren't hurt by that--I knew when she was in the belly that she was destined to be a daddy's girl, I mean, look at Eric.  He's a big softy.  And their astrological signs fit together waaaaaaay better.  But aside from me having suspected this, another reason I don't mind is that it means that a lot of the times that Eric is home, my hands are free!! Wahoooo! It's totally worth it. 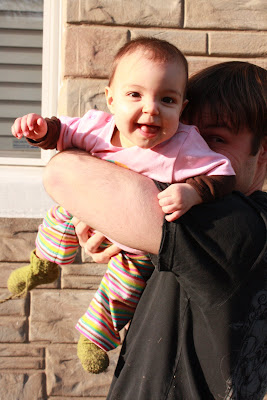 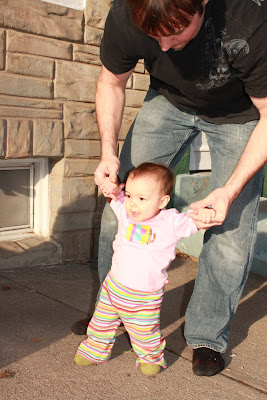