Lots of little milestones to cover before I forget. First, she's crawling. It's very slow and hardly noticeable, but her knees have definitely started moving in a forward direction. Second, her third tooth came in a couple weeks ago. It's the fang tooth on the left side. I suppose the proper name for that tooth is "canine."  Since my canines came in halfway to my nose, my mom dubbed them fangs so that's what I've always called them.  That canine came in handy tonight because she also got her first little taste into the world of carnivores.  That would be the third milestone: she ate meat today for the first time. We had this amazing Broiled Rosemary Chicken, and I set aside a piece for Hannah.  There's also a lentil mix puree that goes with this dish so I set aside some lentils for her as well.  I pureed the chicken and lentils together with a little carrot, and she scarfed it!  This is the first time that her dinner closely resembled ours.

And finally, some more good news is that she is settling back into a sleep routine again.  She learned how to get down from her standing position, and she stopped screaming while standing, so I can leave her in there to wind herself down quietly and she'll stand up and sit down and roll around and fling her toys around and sing to herself until she gets really tired, then she starts fussing at which point, I head up and move her into a comfortable position if she's not already in one and cover her up.  Today her  naps were closer to their pre-I-can-stand-compounded-by-daylight-savings-time fiasco.  Although she took an hour to wind down before her afternoon nap, she did it quietly.  When I went to get her afterward, she was on her knees facing the headboard part of the crib with her Laura doll in one hand, pulling the bumper out with the other and shoving the doll between the bumper and crib. For some reason that cracked me up.

Here's a little photo sequence. I couldn't pick my favorite of the three so I just uploaded all of them. 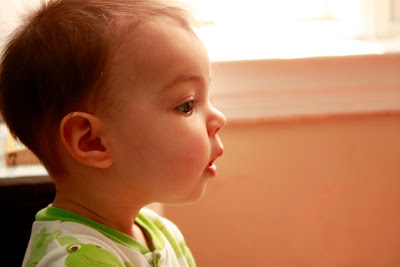 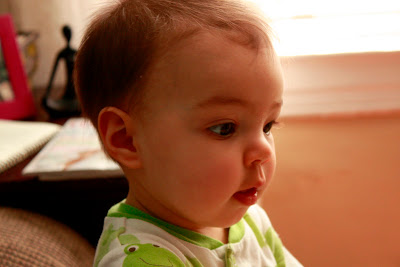 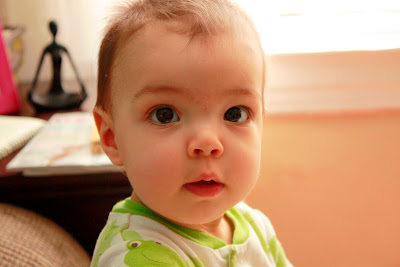