The initial wahooo of Hannah being capable of pulling herself up to standing in her crib has been replaced with....how do I say it....annoyance.  While I am thrilled with her strength and desire to move and explore, her dedication to this new activity is driving me over the edge.  Instead of just practicing her pull ups AFTER waking up from nap or night, she has started practicing BEFORE going to sleep and sometimes INSTEAD OF SLEEPING.  She practices them over and over again for 45 minutes to an hour every time before she either gives up and goes to sleep or I give up and go get her.  The worst part is that she screams while practicing. 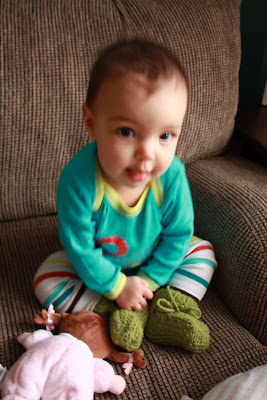 So even though I know she is tired, and even though I'm laying her down at about the same time that I always do, armed with this new control over her body, she is refusing to sleep.  I lay her down, and she immediately ooches over to the slats and pulls herself up.  I lay her back down, she stands back up. Back when I was reading the Sleep Lady book and dealing with her lack-of-sleeping issue the first time, I read a passage that advises the reader not to have a battle of wills with the baby because the baby will always win and instead to let them stand there until they fall asleep on their own.  According to the Sleep Lady, they won't hurt themselves if they fall over....While I'm thinking it'd be quite easy for Hannah to whack her head on some part of the crib on the way down, I remembered this advice from the Sleep Lady and heeded it anyway.   Now, I'm not doing the full Sleep Lady training because I haven't had the time--I have to WORK while she naps--so I've been laying her down, then booking it downstairs to work while keeping one eye on the monitor, and then after about 20 minutes when the screaming has escalated to unbearable decibels, I run back upstairs, quickly but gently lay her down, and start to pat her and soothe her but don't usually get too far because she immediately pulls her knees up under her and starts reaching for the crib bars again. Sometimes I pull her legs out from under her and resume my butt patting and shushing, but she usually has her legs up under her again within seconds and is standing up again before I've even made it downstairs, so I give up and run back downstairs to resume working. I return every 10 to 15 minutes after that depending on the decibel of the screaming.  Sometimes she gives up after 45 minutes or so and stay laying down after the 76th time of me laying her down (she has yet to fall asleep standing up and fall over).  Sometimes I give up after an hour and begrudgingly bestow a get-out-of-nap-free card.

She's practicing at bed time too, except on the days that she doesn't take her afternoon nap. On those days (two this week), she falls asleep nursing and stays asleep when I lay her down.  Tonight is one of those nights which is why I have the opportunity to blog. Yesterday afternoon she practiced for 45 minutes and then slept for 45 minutes which provided her with enough stamina to practice again for a couple of hours before bed.  I was in tears by 8:00.  I need to re-read this section in Sleep Lady, pull a chair next to the crib, and start the training over.  But I'd have to take a couple days off work to do it and just haven't felt like dealing with it. It's a lot to commit to and I was willing to do it before because I thought it'd be a one-time thing where you suck it up for a short bit and then reap the rewards. I didn't expect to have to start the training over a month later because she learned how to stand up. I should just take a couple days off and re-train. It's not like my job needs me.  They really haven't needed me since I returned. I'm not sure why they pay me considering all I do is constantly take online training courses and read leadership and business acumen books.  As much as I like that stuff, I've exceeded boredom and am moving into the territory that I imagine prisoners reach when they'v finished a book for the 76th time and run out of thoughts to think.  My brain is turning into pureed peas.

Pureed peas and insanity are filling up my head.  Hannah's screaming and refusal to sleep cuts into my work time and cuts into my me time, and there's not a lot of either so any kind of a cut poses a problem, but like her mama, nothing Hannah ever does is half ass so these cutbacks have been pretty severe. The result is a moody mama.  I've been in an unshakable funk for the past few days. I'm exhausted but antsy.  I'm bored but overwhelmed. I need a third parallel to make this a better rant but I can't think of a third.  I don't know what I need. More yoga? Probably. I've skipped the past couple weeks. More sleep? Always.  Even though Hannah has been sleeping through the night for about a month now, I feel like I'll never catch up from the first couple months. More gym time?  Some weeks, yes.  I forced myself to go this morning even though I was tired and groggy and just wanted to crawl under the covers and stay there. Usually the gym helps me and since I hadn't been since last Friday, I figured there was a good chance that my lack of blood flow and heart pump was cutting off the veins that supply my head with sanity.  This time the gym didn't help, but it also didn't hurt. 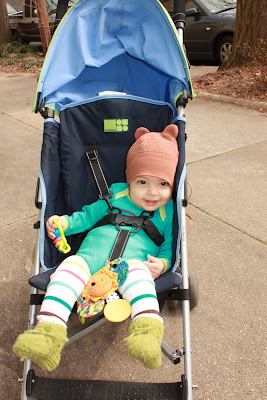 The weather here has been amazing. It's the kind of weather that ALWAYS makes me super happy, but even that isn't helping.  So after returning from the gym this morning and while nursing Hannah, I decided we needed to get outside again, keep the blood and the Vitamin D flowing.  So we put Hannah in the stroller and walked up to Miss Shirley's for lunch (see above pic of Hannah in her stroller, laid back).  I packed Hannah's lunch and a couple of toys.  She sat in a high chair and ate with us and didn't scream once. It was awesome. The walk also provided me and hubby with some much needed quality talk time.  All was well again when I returned home, but then Hannah refused to nap and the sanity started draining out again.  I took a personal day at work today because of how I've been feeling; I decided I need to rest and was very much looking forward to being lazy and taking a nap while she napped instead of racing off to the computer to work.  No such luck. No laziness to be had.  After almost an hour of her screaming and either me or hubby running up and down the stairs every 10 minutes or so, I took her into our bed and nursed her with the hopes that she would fall asleep next to me with her cheek smashed up against my boob like she used to when she was younger. I think it kinda worked because the clock went from 2:13 to 2:39 pretty quickly, but she was suckling the whole time so I know she wasn't too out of it.  But at least we got cat naps.

After cat naps, hubby left to go have guy time, and me and Hannah headed to the kitchen to make her some more quinoa and peas since we'd run out of both.  Hannah played happily in her Jeep for a bit but then started fussing louder and louder until, halfway through pouring the peas into the ice cub trays (quinoa still on the stove), I gave up and picked her up. Noticing the clock said 4:55, I took Hannah out front to get some fresh air and stalk MC.  I knew that if she didn't go to the gym, she'd be arriving home for work within a couple minutes and if we were outside, I thought my chances of intercepting her and talking her into saving me from my baby were pretty good.  Luck was on our side because MC skipped the gym today and pulled up in front of the house a few minutes after we went out.  She got out of her car with a big smile, calling out "Hi Peanut!" and I instantly felt better, but also worse at the same time because I started feeling guilty. Anyway, I ignored the guilt and accepted the help that MC offered and because of her, managed to get the peas in the ice cube trays, the quinoa pureed and also in the trays and in the freezer, and Hannah fed without a breakdown.  I'm so glad that we have such amazing neighbors.

That was an exhausting rant.  If you can still see straight after all that reading, use them to check out these pictures I took yesterday when hubby got home.  Although he usually tries to change his clothes before holding Hannah, she met him at the door and he couldn't resist her insistent cries to be held. That and she was practically launching herself out of my arms in an effort to get to him. 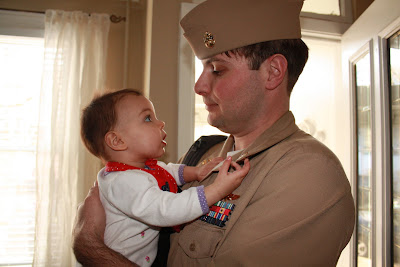 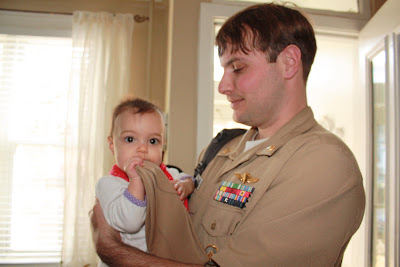 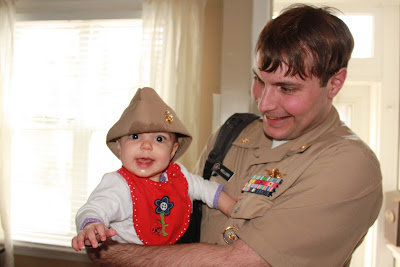