First the fun stuff: Hannah blew her first bubbles at swim class today! We were floating around in the 2-foot section and she was sorta standing, sorta bobbing/treading water which meant her mouth kept going under, and on one bob, she blew a bunch of bubbles.  Even more fun than that: NO LOCKER ROOM BREAKDOWN!  Craziness...I'm wondering if it had anything to do with the fact that the locker room was totally empty today.  Who knows. I don't have time to analyze the awesomeness--hands are full trying to figure out the non-awesomeness....sleep.  Same ole' story. Cue the non-fun stuff.........

I kirked out again last night.  I've been keeping track of my angry outbursts on my calendar and they happen every other week and are accompanied with extreme fatigue and followed closely by--EARMUFFS BOYS--my period.  Yes, it's coming every 2 weeks as well.  Isn't life grand??  I specifically chose the ParaGard IUD because I didn't want hormones, but I'm thinking now that that was a huge mistake and that hormones are probably my only chance at sanity.  The pill is the only thing that fixed me the first time around, when I was 15 and had been dealing with 2 periods a month accompanied by exhaustion, insanity, and severe cramps for the 2 years prior. 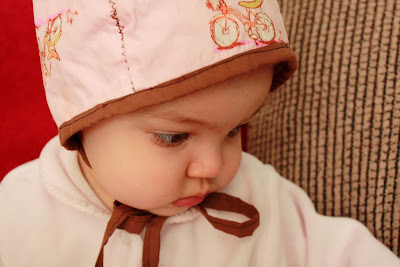 Although I don't think there is ever a good excuse for losing your temper, if there were one, I'm pretty sure I am in possession of that excuse and also its runner-ups.  Trying to get Hannah to sleep at night has become the bane of my existence.  By that time of the day, I'm tired. I want to punch my time card, find a comfy spot on the couch, and veg out to another episode of America's Best Dance Crew (don't judge--I gain coordination just by WATCHING).

Hannah's extended screaming makes me feel completely inadequate as a mom, and then when I get impatient and frustrated, it makes me feel like a complete a**hole.  I mean, she's a BABY! Hello!! Why can't I generate unending sympathy????  I try to remind myself that sometimes it's really hard to fall asleep, and that life is miserable when you're super exhausted but can't fall asleep and probably even more so when you're a BABY and have no clue what's going other than how you feel which is beyond exhausted, so I should be like, "oh, my poor little schmoopy baby sweetie it's okay sugar bunkin lovey..."  I guess I'd be more sympathetic if she would at least LAY DOWN AND TRY TO GO TO SLEEP.  I don't know anyone else who stands upright and screams for all their worth as a way of winding down and getting to sleep.

I had resumed the Sleep Lady shuffle last Saturday but was seeing NO results a week later (yeah, yeah, she says to give it 2 weeks, but COME ON!!) and my sanity was thinning so I decided to try the dreaded Ferber approach.  At various points throughout the weekend I attempted to engage Eric in a discussion about various sleep plans, asking for his input, suggestions, and buy in and trying to come up with a new plan that we could BOTH  stick to (since he refuses to follow my lead).   His only comment was a question of why we couldn't pick her up.  I pointed to Pavlov's dogs (not literally of course). Her crying is like when the dogs push the button, and us picking her up is like when the food comes out as a result of the dogs pushing the button.  If she continues to associate crying with getting picked up, SHE WILL KEEP PUSHING THE STUPID BUTTON. Yes that may be a crude analogy for explaining training by association, but I'm pretty sure the Sleep Lady uses the same one...The point is, this is for her own good because we are not picking her up with any consistency anyway (he picks her up, I usually don't) so she's just constantly confused trying to figure out how to work the stupid button, cry louder? Harder?  Throw in some shrieks??  Beat on chest, swing from vines, and launch into song "George, George, George of the Jungle..."??  I keep stressing that our only way of communicating with her right now is through consistency so that she can anticipate first this, then this. If there's no consistency, she's confused, and if she's confused, she screams, and if she screams, I scream.

Back to Ferber: I suggested that after nursing her, I tuck her in, leave, then go up in 7 minutes, and then add 3-5 minutes each time after that, so 7, then 10 minutes later, then 15ish minutes later until she's asleep....I didn't get any feedback from him so I started the plan last night. I laid her down around 7:45 then returned 7 minutes later, laid her back down, covered her up, patted her rump, and then came downstairs to make some food.  5 minutes later, Eric went up....As he was going I politely (ha!) reminded him of the plan and asked him to wait another 5 minutes, but he ignored me.  He immediately PICKED HER UP (though she was not even crying that hard) and then after laying her back down, hovered over the side of the crib patting her butt and cooing at her for about 5 minutes before coming downstairs.  The second he left her room she was screaming louder and harder than before, and I was seething.  So I kirked out and yelled "WE HAVE GOT TO GET ON THE SAME PAGE" among other less nice things.  It's a small house so I'm pretty sure my yelling didn't help Hannah's stress level at all.  More jerk points for me.  As soon as I stopped yelling, I went upstairs, picked Hannah up, walked her downstairs, and handed her to Eric, then walked back to the kitchen to finish chopping veggies for my salad. I suppose that was my way of throwing in the towel.  He'd mentioned something about thinking her bedtime was too early: here ya go! Put her to bed whenever you want. 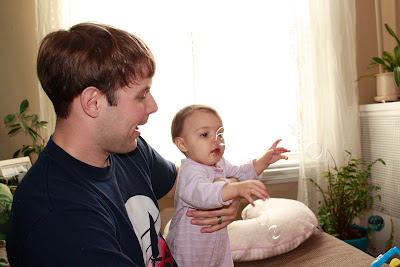 That thought seemed like a good idea so I kept going with it. I told him he was in charge now.  At first I was still a little angry and trying to punish him because I feel like his refusal to get on a parenting page with me is punishing me.  But the more I talked, the better the idea sounded, not just as a punishment but like, hey, maybe this'll actually work. If nothing else, it at least gets me out of the dreaded bedtime duty.

I said, from now on, aside from her last nursing of the day, you are completely in charge of the bedtime routine and can do whatever you see fit, and I won't argue or question your decisions as long as I don't have to suffer the consequences. He thinks her bedtime should be later, like 8:30 since she screams until then anyway. I reminded him that we tried moving her bedtime back when she was about 4 months old; we pushed it back to like 10:00 (at that time she was screaming until 10:00), and then she started screaming till like 12:00 which totally sucked. I'd rather she scream from 7:30-8:30 then from 8:30-9:30, but as long as I'm not the one who has to sit with her while she screams, he could put her to bed at midnight for all I care (that's not true, I do care but I'm trying REALLY hard not to).  My non-emergency mothering hours are between 6:00 a.m. and 9:00 p.m.  I am not a night owl and refuse to become one.  If he wants a night owl for a baby, fine, but don't include me in those owl-ing activities.  He seemed okay with that.

So I ate my salad and watched ABDC and Eric and Hannah sat next to me on the catch and just hung out, and then at 8:45, he took Hannah up to her room, and I went to brush my teeth and get ready for bed.  She screamed till about 9:20, and then he came to bed.  I felt guilty then so I apologized and snuggled him for a bit while he finished reading his homework.

There is a teeny, tiny, insecure part rooted deep in my mothering self-esteem that does not want him to succeed, but the bigger, better part of me hopes that he does have the answer because I sure as hell don't, and I can't spend another week doing this, let alone another couple years.  I did make what I think is a pretty good suggestion while snuggling last night:  She has taken to snoozing/suckling for about 30 minutes on whichever boob I give her first after her bath, then she wakes up, eats for about 4 minutes on the other boob and is ready to play. I'm thinking this catnap is the problem for our recent issues (though it hasn't always been a factor and therefore hasn't always been the problem).  I'd have gotten into the habit of waking her up sooner but I always have my fingers crossed that she'll stay asleep when I lay her down (totally against the Sleep Lady's rules but SO MUCH EASIER), and every once in a while (on a day when naps were disastrous) she does.  So I suggested that we just turn the whole routine on its head and nurse her before her bath so that she can go right from bath to story time and then bed.  That gives her chance to play a little more after relaxing on the boob and also a chance to digest her food first which will probably make her more comfortable.  He liked my suggestion, which means that if  having Eric put her down works, I don't have to feel like a total failure since I thought of part of the solution. Oh precious insecurity!! How you plague me...