I bought Hannah some bubbles and a fun little bubble blower thingy last weekend to commemorate spring.  Since the rusted metal porch out back is days away from collapsing with everything on it, and since the sun won't really hit the back of the house too hard till summer is underway, we took the bubbles out front for some traditional Baltimore stoop sitting.  I took the camera to document the occasion but two things happened that prevented me from getting good pics: 1.) the wind blew bubble town away faster than I could build it, 2.) Hannah wasn't really too into the few bubbles that did hang around.  While bubble fest 1 went bust, bubble fest 2--which Eric threw spontaneously during breakfast one rainy morning a couple days ago--was more of a hit. 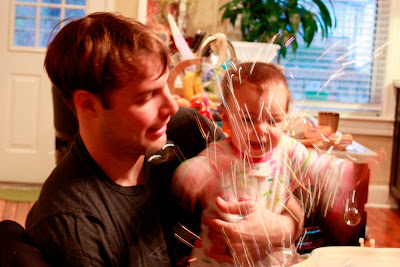 Later we needed to go outside and Eric likes to do this thing where he puts outfits over top of her footed sleeper things....It's weird. I've explained to him that those things are not like long johns, but he doesn't see why not, and in his defense, I guess there's no good reason really why they can't be used to layer, except for the fact that it looks ridiculous....I made him hold her up so I could take a pic.  It's obviously not a good pic, but it illustrates how silly it looks. 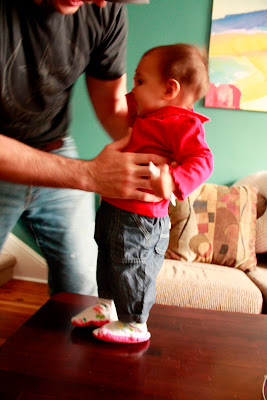 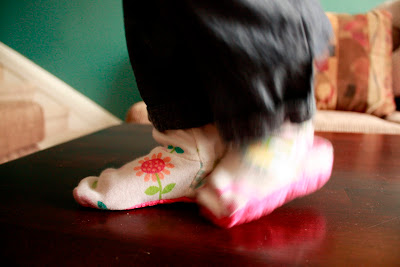 You'll notice lots of blurs in these photos....that's because Laura taught me how to adjust the white balance on my camera so that I can FINALLY take indoor photos without the flash.  I've been trying to figure that out for over a year now.  So now that I know how to do it, I'm obsessed.