I did that thing where I put off posting because I've been too exhausted from all the fun I've been having and at this point, trying to catch up without completely overwhelming and annoying my dear readers is stressful and intimidating.

I'm a fan of chronological order so rather than go in reverse, I'm starting with where I left off on Thursday.  I snapped the first two pics because I love this outfit of hers and was therefore a little trigger happy.  Anyway, since she spends a lot of her time rooting through the drawers in our coffee table, it's a good memory to capture.  Emptying the drawers is how she kept busy while I threw some toys, her dinner, the camera, and a sheet in my backpack in preparation of the season's very first First Thursday. 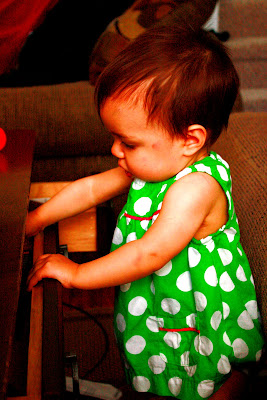 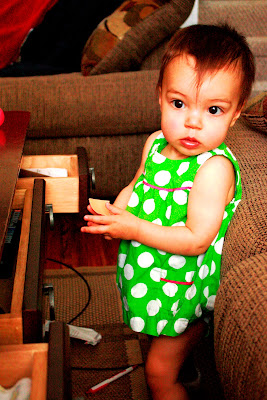 I'd been looking forward to First Thursdays for months, and it totally lived up to my expectations, which really only required that Hannah have fun; as long as she isn't miserable and screaming, I'm not either.  She was in such good spirits, that we didn't want to leave and ended up lingering until almost 7:00 (which is bath time).  Frankly, I'm not surprised that she had fun: What's not to love about being outside, laying in the grass, listening to music, being surrounded by tons of people who also love those things and therefore have good energy, and hanging out in a family friendly beer drinking atmosphere?  Add to that the fact that the weather was more perfect than perfect--sunny and some awesome temperature, maybe 78ish??  We got there almost an hour early and put our blanket in the shade of a tree behind the sound booth.  No it wasn't the best view, but the shade was awesome and honestly, I didn't really care what band was playing or what they looked like while playing; I was in it for the atmosphere. 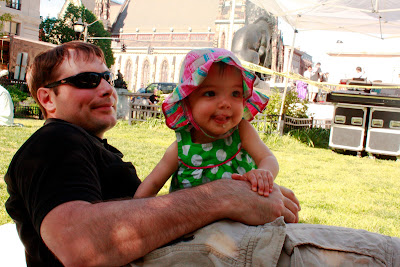 Hannah has gotten super social in the last couple of months.  She hasn't seen Krystal since Halloween but went right to her and started showing off her almost-walking skills.  Later on she tried to sneak over to our neighbor's blanket (who we didn't know). 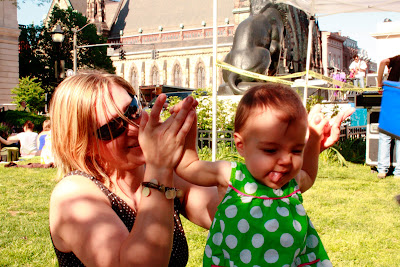 is tied with Goodnight Gorilla

for her absolute favorite book.  I leave Goodnight Gorilla in her room though since it's a before bed book, but the touch and feel book comes almost everywhere with us.  She likes the kitty page best, though she's recently become interested in the hedgehog. 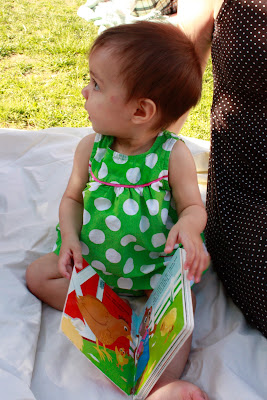 Hannah took a break from socializing to chill out with dad.  (There's Grannah in the background!) 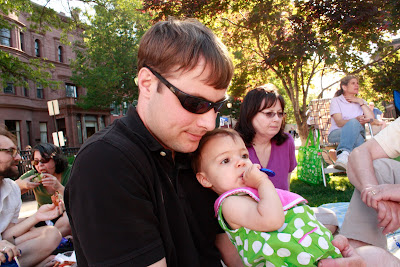 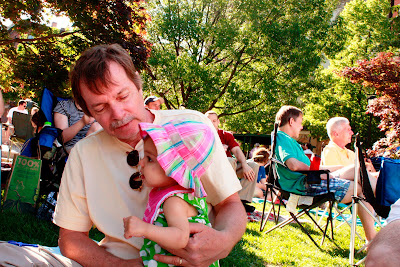 Krystal's hubby jogged down with their dog Deliliah who's a big ol' sweet baby.  Hannah looks like she's pulling away in this pic, but she spent most of the time moving toward the dog.  She got a couple of good dog kisses in and then got to explore the dog's teeth and ears and toenails, all the stuff I'm pretty sure she wants to do with Kaya but you know Kaya's not about to let that happen. 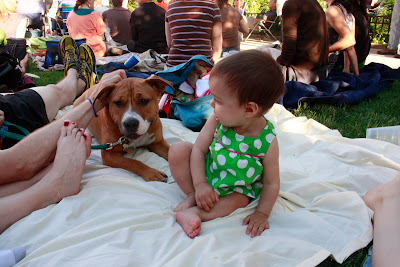 (Preggo Mary in the background!!) 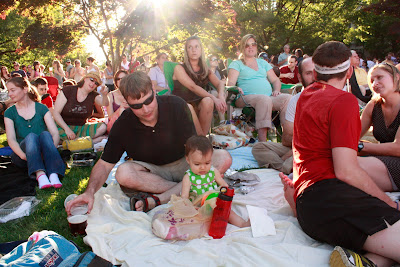 Becca (beside Mary) took some pics so that I could make an appearance on the blog. 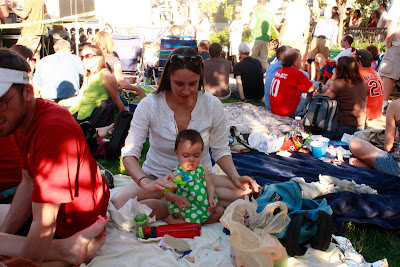 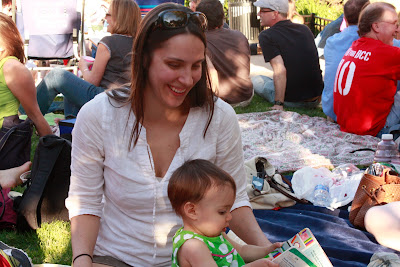 On Friday, we went with Adrienne and Kylie to the Mother Goose on the Loose at the main library branch on Fridays (I guess there's one every day of the week at a different library).  I forgot how amazing the main library was, and the kid area was beyond awesome.  Story time is in this big, sunlit room with tons of toys and all these little stuffed birds that make the correct bird noises.  Outside that room, the kid center is huge with tons of stuff and a Koi pond!!!  Here's Hannah checking out the fish with Grannah (all the Koi swam to the other side right before I took this pic). 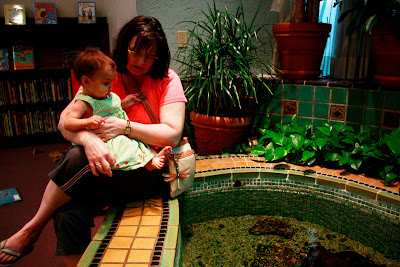 After the library we trekked around the Flower Mart Festival (just a couple of blocks from the library), grabbed some festival food, and camped out in the grass before resuming our flower gazing.  I took some pics of the picnic but forgot to change the white balance so they turned out blue and are therefore un-postable.

A couple of hours later I showered and put on something other than a nursing tank.  It's not everyday that I don a real bra; to commemorate the occasion, we had Eric's dad take a pic. Since Friday was the day I entered the dirty thirties, Eric and I had planned to go out to dinner. This was the first birthday that I wasn't obsessed with celebrating.  Normally I try to plan something fun, but this year, in spite of it being a big birthday, I wasn't interested in planning a crazy fiasco. 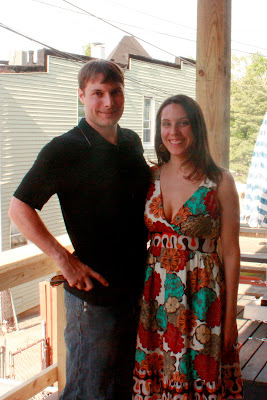 We never made it to dinner though because Eric had planned a surprise party at Patterson Bowling Center complete with pizza, rhubarb crumble made by Laura, and of course, duckpin bowling. It was a short party since we drove the Cinderella chariot and I had to be home shortly after 7:00 to nurse Hannah before bed, but it was really nice!
I have no idea what happened on Saturday....It's all a blur, but my first Mother's Day was great!  Laura came over around 3:00 and we went to the gym (the one I used to belong to), we did a little cardio, then went to an awesomely relaxing yoga class with my favorite yoga teacher.  After yoga we sat in the sauna for a while, and then when I got home, I soaked in the tub for--something I haven't done in a long time.  After a few minutes Hannah joined me. Of course the water was a lot deeper than she was used to so she was having fun climbing all over me and kicking and splashing.  She is hysterical and a ton of fun to be around these days.  I'm really loving this mom thing these days.
I hope everyone else got in a little R&R to celebrate Mother's Day!
Posted by terri at 9:28 PM