Summer and the socializing that comes with it is in full swing, and as a result, my computer time is waning.  Obviously that's a good thing in that it means we're having too much fun to sit around and stare at a this glaring screen, but it's not a good thing for blogging.  Of course, it hasn't been all social fun time; I also spent a lot of time in the kitchen last week, so much that the bottom of my right foot got sore, presumably from standing on it for so long (??).    Not that that's not fun time, because it is. I really like hanging out in the kitchen and experimenting with new recipes especially now that there's some food in season. Last week we bought fresh peas at the farmer's market for the first time. We hadn't ever tasted fresh peas before and loved them so much that we housed the majority of them raw from the bag we bought them in.

On Tuesday I made potato leek soup, most of which I froze.  On Wednesday I made this kale and white bean soup that was awesome the first time around but is just so-so this time, and again froze most of it.  On Thursday I made two pans of lasagna, one to keep and one to give away. And on Friday, I made macaroni salad, beet and carrot vegggie burgers (awesome), and two loaves of bread the old fashioned way. That night after Hannah was asleep, I took a pan of lasagna, some of each of the soups, and a loaf of bread over to Mary's because she'd delivered her baby girl earlier last week and arrived home from the hospital on Friday. It was Eric's idea actually. We both agreed that bringing food is at the top of the list of Helpful Things You Can Do When Your Friend Has A Baby, and he reminded me of that earlier in the week when we got the it's-a-girl text message.  In addition to friends and neighbors bringing us yummy food in the hospital to keep us from starving, Libby had made a ton of delicious food in advance that she dropped off the day we got home and that fed us for the first week.  That's a debt I'm more than happy to pay forward and look forward to being able to do so a few more times this year.

When I got home from Mary's I spent another hour or more sitting on the back porch talking with MC and Amy. I just couldn't pull myself away even though I keep going to bed later and later and every morning I wake up and say I'm going to go to bed early that night...I love my neighbors.

I've got a pretty funny diaper story from Saturday, though I can't find the words to write it nearly as funny as Eric's impersonation.  I left early that morning to go climbing with Brandy and left Eric to put Hannah down for her morning nap, only she didn't ever fall asleep.  First she sat up there and pooped.  This is a normal routine for her if she doesn't poop earlier in the morning; she'll sit in her crib and play with her aquarium or read books until she poops and then when she does, she'll scream for us to come change her.  After that she usually passes right out.  But not this time.  Nope.  This time, after Eric cleaned her up and laid her back down, she took off her diaper, stood up with the diaper in one hand, peered over the bars of the crib, and pitched the diaper overboard.  He was watching her in the monitor when she did this and his impersonation of it is hysterical; it's all in the facial expression and I'm just not a good enough writer to relate the hilarity that has become Hannah.
She's been running around in just a diaper a lot lately both because of the heat (we are using the air conditioning but keep it at 78 degrees--just enough to cut the humidity) and also because feeding her makes the kind of mess you might find in a barnyard after the pigs have been fed.  I'm tired of all her clothes getting stained. At first I thought it wasn't that big of a deal, after all, she's a baby and I'm no fashionista so it's no big deal if we end up with a little stain here and there, but the stains aren't little and they aren't here and there; they cover the entire front of one of her super cute shirts that I really like.  I've soaked it in both Oxyclean and Borax and it faded a bit, but not all the way so I decided that it does kinda matter and that I should at least try not to wreck her clothes, and since she rips off her bibs (not that they cover much territory anyway), the only option is to strip her down before every meal.  In addition to not ruining any more of her clothes, naked meal time makes for an easier clean up.  She's gotten pretty good at diaper removal and will often peel back the velcro tabs while shoveling peas into her mouth so when she's finished, I just drop her naked little butt into the sink and let her play there while I clean up. 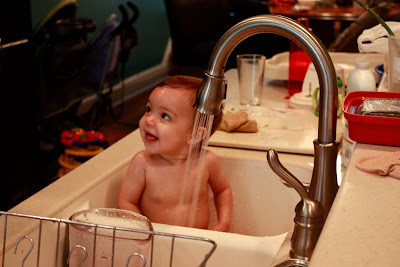 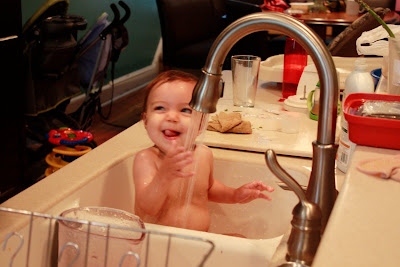 I think that bathing babies in the sink is really cute--in addition to being easier on the bather's back--but I never understood the logistics of how to make it work.  When they're itty bitty, they're too long to lay flat in the bottom of the sink (unless your sink is huge) and not yet capable of sitting up, so how do you do it? Wash with one hand and prop them up with the other?  Not that we had the option to try to figure it out considering   we tore out our kitchen, sink and everything else, shortly after Hannah was born.  Anyway, she loves to slide around the tub on all fours and we love to watch her being all crazy.
I've got more pictures and stories from our super fun weekend, but the pics aren't uploaded, and I'm too tired and zombie-like to tell the stories.
Posted by terri at 8:58 PM