were an impulse buy when I ran to Target yesterday for for a new sippy cup.  The instructions on the back of the bottle allow you to gage your bubble preference ranging from one capful for just a little bubbly to seven capfuls for super bubbly.  I got into a go-big-or-go-home frame of mind and added six capfuls.  The stuff I had as a kid pretty much sucked: it was never all that bubbly and what bubbles there were flattened out pretty fast.  Suffice it to say, this stuff is not that stuff.  These bubbles were so awesome that it made me wanna jump in there and start building myself a big ol' Santa Claus beard and seeing how long I could make it before it fell off.  Hannah was not interested in building herself a Santa Claus beard or in letting me build her one either...At first she was puzzled and vaguely interested but then she was weirded out by them.  She grabbed my shoulders and started pulling herself up presumably in an attempt to monkey her way up to dry ground.  As a result, picture-taking was difficult.  Lesson learned: start with one or two capfuls next time. 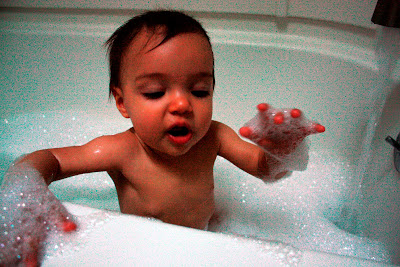 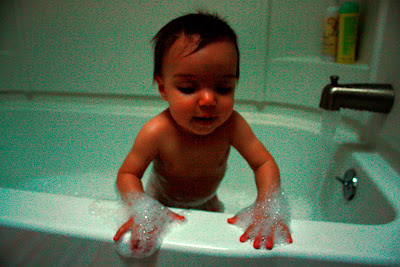 Daddy to the rescue. 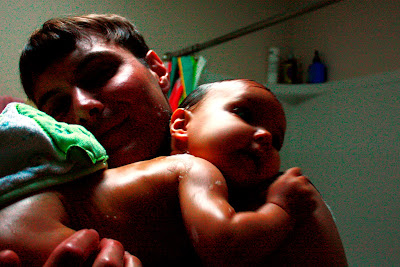 I read that article linked at the end of the last post shortly after posting yesterday and gotta say that shockingly enough, I was not into. I'm a big fan of all things sarcastic and the ugly truth is my favorite kind of truth, but that writer sounded downright disgruntled with his stay-at-home status. I prefer a disgruntled candy shell over a hidden chocolate sweet center.  I think this guy was missing his chocolate center. That or I'm turning to mush. Please say it's the former!  Anyway, I don't judge him for being disgruntled; everybody knows that not everything is for everyone, and that includes staying home with kids.  That guy seems to be one of those people for whom it's not for.  What I don't understand is why he wouldn't just get a job and a nanny (maybe he eventually did? I didn't look at the date on the article). He is right about the messes though; I do clean up the same mess over and over and over and over and over again (hunks of bread, all over the high chair and on the floor).  But that's anywhere, isn't it? I mean, even at my old job, I felt like I was doing the same stuff over and over again. Like Janis Joplin said, "It's all the same f***ing day, man."  I've always liked that quote but it fits my life now more than ever.  Friday night, Tuesday night, weekend, week day; it makes no difference to me.

Although that last paragraph would be a great place to end this post, I've gotta drag it on a bit more because I took a couple of cute pictures this morning right before Hannah had a particularly bad head bonk.  She's been having more and more of those lately.  For a while my mothering reflexes were awesome; I intercepted many a potential disaster, but either I've gotten slower in my near-30 status old age, or she's getting a lot faster. Probably both.  Grannah suggested a football helmet this morning and although she meant it as a joke, I'm Googling baby football helmets. It's that or a bubble, but I have no idea where to find a giant, indestructible bubble. Pre-head bonk, we played some guitar.... 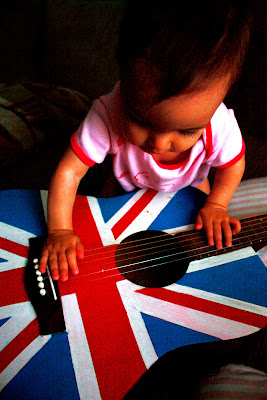 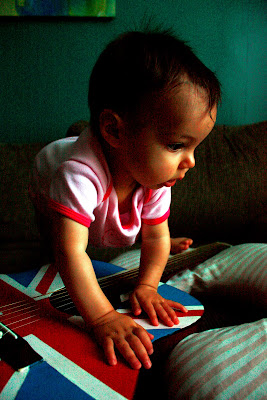 Then I managed to catch the Elvis lip curl thing she's been doing lately. 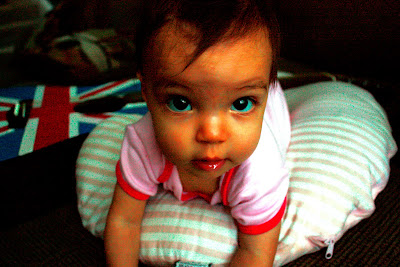 After bonking her head I felt bad leaving her to go to the gym so instead of laying her down for a nap and donning some spandex as is the usual Thursday routine, we both crawled into the bed in her room and she nursed and snuggled and napped with me.  Unfortunately, when we randomly decide to do that, the naps are no more that about 40 minutes (as opposed to her usual 60-90 minute morning nap) so she woke up from that nap at 9:15 ready to go.  On the bright side, that meant we could make it to our very first Mother Goose on the Loose (interactive story time at the library) which we have always wanted to go to but since it's at 10:30, we've never been able to make it before.  I'm glad we finally went because it was a BIG hit with her.  She spent much of the time squealing, screaming, talking to her neighbor, and smiling all big and cute and cheesy.   I think I'm forgiven for my increasingly slow reflexes.
Posted by terri at 2:12 PM