The Techno-Baker Hosts a Pizza Party

I think I forgot to mention that I got a bread machine for my birthday. I requested a loaf pan and a bread bucket, two tools recommended in Artisan Bread in Five Minutes a Day

, an awesome book that makes bread making super easy and quick.  My mom got that book for Eric for Christmas since he'd shown an interest in making bread earlier in the year. I ended up using the book more than him though and officially claimed it as my own a couple of weeks ago by flagging all the recipes I wanted to try with post-its. Right about then I also decided that I'd need some serious tools to increase the success of my serious efforts.  My birthday list looked like this:
1. Loaf pan
2. Bread bucket
3. Nice looseleaf tea
4. Recipe book holder thingy

Eric being Eric went a mile and a half farther and got me a ridiculous amount of awesome tea from Teavana and super nice, fancy pants bread machine

which, quite frankly, scared the bejesus out of me and made me feel like a cheater, cheater pumpkin eater.  AT FIRST.  See, I'm not a fan of thingys with buttons, and also I was feeling like quite the super mom (a status it's hard not to aspire toward) for making bread almost every day (though if you read that book you'd see how un-super the skills and time required for it are--but to those who haven't read it, I seem awesome, right?).  So I wasn't totally enthused with my gift.  Loaf number one (pictured below) increased my lack of enthusiasm. I thought the point of a bread machine was to throw in the ingredients, push a button, and wallah! Fresh bread! Right? Wrong....I threw in the ingredients IN THE ORDER MENTIONED (because that's like the number one commandment with bread machines), pushed the buttons, and after 4-1/2 hours, I pulled this out of the techno-baker's belly:

Tantalizing, eh?? It almost looked granola-ish, but it did not taste granola-ish.  Not good. At all.  I was ready to return the techno-baker and return to my old-fashioned, highly-respected bread making ways but Eric suggested we try again, so I did.  This time I watched the loaf a bit more carefully and when it hit the rise cycle and there was still a mound of flour visible through the peep hole, I paused it, pulled out the un-mixed dough, mixed it myself, and then returned the dough to the machine to continue on with its magical process.  And this time the loaf turned out good, so good in fact that I scarfed it prior to taking any pictures.  But the fact that I had to hover over the peep hole and mix the dough myself seemed to defeat the purpose and still made me want to return it.  I mean, if I'm doing all that, it's not saving me any time.  However, when I was returning the dough in its little dough pan thingy back to the machine, I noticed what proved to be crucial: I snapped it down farther that time than I had previous times. At least, I was pretty sure it went in a little farther. Hmmmm....I conjectured that it was POSSIBLE that the problem all along was that I wasn't snapping it in far enough. Of course I'd prefer to blame the machine than the user so if you could all support me in cursing the machine, that'd be much appreciated.  All the same, I kept this possible theory to myself for the time being and just enjoyed that loaf.

Yesterday we took a bread-making break and decided to give pizza dough a try. One of Eric's favorite family traditions growing up was Friday night pizza night where they'd all make their own pizzas.  That's the kind of tradition I can get behind, though I don't think we'll be doing it EVERY Friday just yet, but maybe when she's older. So, trial three with the bread machine: throw in the ingredients, snap the dough pan thingy in past the point of previous snaps, push the buttons, and voila! Awesome pizza dough in an hour and a half. We couldn't pick which toppings we wanted so we made four pizzas and invited the neighbors over. Eric made his favorites, Hawaiin and BBQ Chicken, and I made one with artichoke hearts, black olives, and sautéed mushrooms and a margherita pizza for Hannah that just had tomatoes, basil, mozzarella, and a little bit of garlic and dried oregano.  As suspected, her first pizza party was a big hit.  See the piece she's holding upside down in the pic below? She devoured TWO of those. 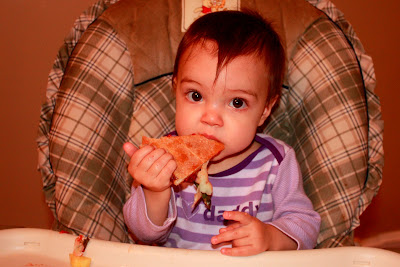 Loaf three is in the bread machine right now, and it looks like it's going to turn out perfectly so I guess we won't be returning the techno-baker after all.  Now that I'm not intimidated by its shiny exterior and am less concerned with the previous super image I was shooting for, I'll admit that the techno-baker has some perks.  What I like most about it is that I can make one loaf at a time.  My only complaint with my previous method is that it requires you to make your dough in bulk, that's why it was called Artisan Bread in 5 MINUTES a Day, because you only mix ingredients once for every 3-4 loafs.  The dough keeps in the fridge for like 2 weeks and you just pull a handful out every day, let it rise, and toss it in the oven.  But all that dough takes up a lot of room in the fridge and also, if I wanted to make a specialty loaf like cinnamon raisin or something (which I never have) it would mean I couldn't be making a regular loaf at the same time because I only had one container that fit the dough and only room for that one in the fridge anyway (that's why I asked for a bread bucket in the hopes that that would take up less room in the fridge and allow me to bake two loafs at a time).  So as far as fridge space and loaf flavor flexibility is concerned, the techno-baker wins. And on the taste scale, so far I think it's equal to my previous methods.  And yeah, as it turned out, it really is as easy as putting in the ingredients and pushing a button, so long as you are one of the snap-savvier people on the planet, that is.
Posted by terri at 2:51 PM

Email ThisBlogThis!Share to TwitterShare to FacebookShare to Pinterest
Labels: food