So Much to Say, So Little Time

I've started at least 20 different blog posts in my head over the past few days.  This is not unique; I am often blogging in my head.  The problem is finding time to sit down and put the blog on "paper."  Typically by the time I get around to blogging, I've forgotten everything I wanted to write.  Even tonight, just as I clicked "new blog" Hannah started crying.  She went to sleep at 9:00 after a fun evening with Laura and Josh, a nice bath, and a hearty meal.  I crossed my fingers for another night like last night which was by far the best night EVER.  She slept from 9:30 to 6:00 a.m.  Amazing!!!!  And since I went to a spinning class earlier that night, I was so exhausted that I actually slept straight through too.  [Side note: the crying has ceased, as I suspected, she had gigantic burp which Eric helped her get out.]  Earlier blog posts started in my head were going to complain about how insane night time had become because for a while there it was taking us 3 hours to get her down again.  Sunday night (and many of the nights leading up to Sunday) she was up until 10:30.  She would eat heartily on both sides, burp, maybe eat some more; we did everything, still she screamed.  Untillllll....we took her into the hallway.  As long as she wasn't in her room, the screaming stopped.  We performed experiments where we would step back and forth over the threshold of her room and it was just like that scene in Ace Venture where he's standing on the balcony demonstrating that the sliding glass balcony doors are scream proof.  So having deduced that her problem is not physical, we needed to rule out emotional (hatred of room, fear of dark, etc.).  We never did manage to rule those out, but she went down okay last night and she's down now (and Eric didn't rock her back to sleep or anything, just burped her and laid her down) so I assume it's neither of those things.  Could it be that she just doesn't want to miss anything? How soon do children acquire the "I don't want to go to sleep" habit???  Weird. 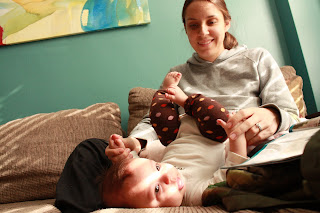 On a completely separate note (I told you I'd been brewing a number of posts over the past few days--in spite of them being unrelated, I'm going to try to catch up), she has definitely gotten the hang of rolling over.  Yesterday, my internal dialogue/blog post went  like this "She has rolled over a total of 6 times, 3 of which were in the last 24 hours."  She has since rolled over a few more time so I lost count.  She had rolled over 3 seemingly random times (the first of which I saw live, the other 2 I caught on the video monitor) all separated by a few days or more.  Then on Sunday night, I went in to get her around 3 in the morning and she was on her back.  That morning when I started hearing her through the monitor, I clicked the video on and sure enough, she was on her back already waiting for someone to come get her.  Then later that day after waking from a nap she was on her back.  So, like I said, she seems to have figured it out, at least the stomach to back rollover--I haven't seen the back to stomach one yet.

I just uploaded the pics on the camera to include in this post and remembered another topic I wanted to blog up: my Dad and Sondra (his girlfriend) braved the snowstorm on Saturday and drove to Baltimore for a visit and brought with them a highchair for Hannah.  Prior to Hannah being born, I had decided that we didn't need a highchair.  I figured she could just sit in a booster seat at the table with us.  After all, I'm not into accumulating stuff and I'm definitely not into having a cluttered house--although there's plenty of room, it is a city row home so it's not like there's a lot of free space.  Anyway, when my mom was here for Thanksgiving she kept propping Hannah up in a seated position and lo and behold, Hannah liked it! Which freed up my arms to DO things with TWO hands.  Amazing.  But since she can't sit up on her own (only a matter of time I'm sure), she has to recline slightly so we were putting her in her stroller and just rolling her around, and honestly, that would have worked fine in spite of it being a bit low to the ground, but I gotta admit, this high chair is AWESOME!  The seat adjusts from almost completely laying down to sitting up super straight.  It also adjusts from a height that fits our pub style dining room table to so low that we could sit on the floor and feed her.  The wheels are great because I just drag her around the house in it so she's always close to me.  The other day I dragged her into the living room and let her watch Baby Einstein in her high chair.  And it folds up so it can be stowed.  She looks so cute sitting in her high chair that I had to snap a bunch of pics. 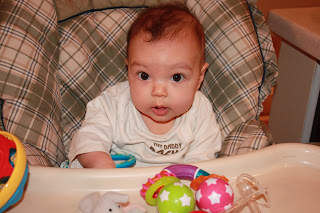 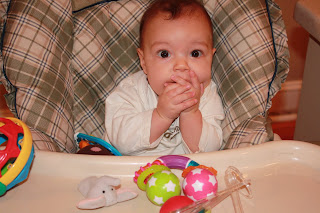 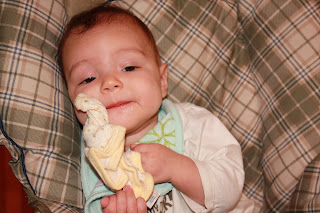 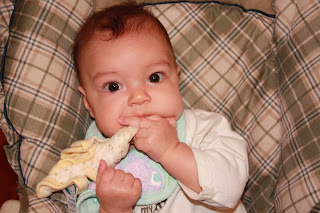 If you're wondering, that's a frozen wash cloth she is holding in the last two.  I keep hearing people say it's great to numb the gums of teething babies and since it's free and since she loves eating her wash cloth while she's in the bath tub, I figured I'd give it a try. It's not as much of a hit as a bath tub wash cloth, but she likes it okay.