I finally got to take Hannah to see the lights on 34th Street tonight.  I had overly ambitious notions of making hot chocolate or wassle and walking down there on Christmas Eve or even Christmas night, but it didn't happen. I figure it's this week or never--I don't know when they take the lights down, but I can't see it being much fun after New Years.  Hannah's sleeping is so incredibly screwed up right now that she ended up napping from 5-7 tonight which worked out perfectly for the festivities.  Eric went along begrudgingly but ended up catching my excitement and having fun.  I carried Hannah so she could see all the bright lights and he donned the camera played paparazzi.

Here she is on after being suited up and strapped into her stroller.  We're going to see the lights!! 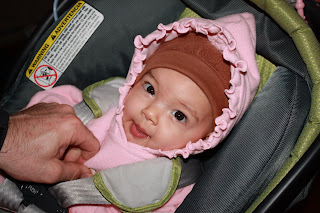 A nice bystander offered to take a family pic. 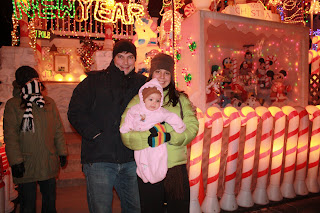 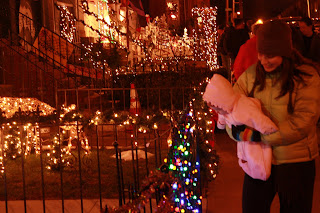 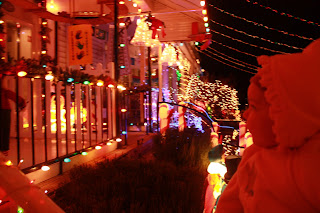 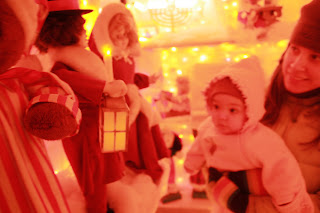 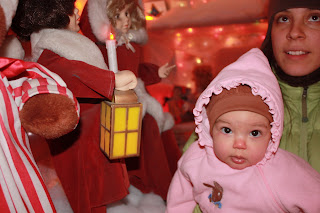 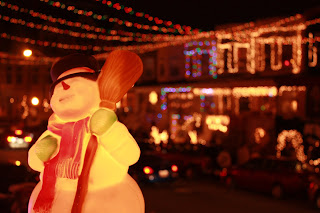 Earlier this week....Hannah had to say goodbye (for now) to her grandparents who drove back to Michigan on Monday. 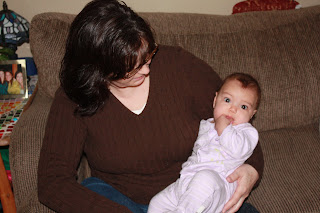 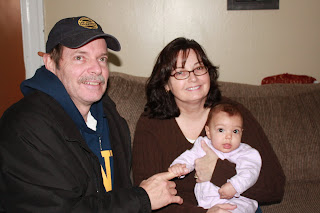 Hanging with the family. 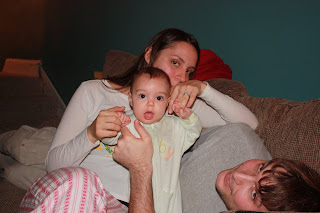 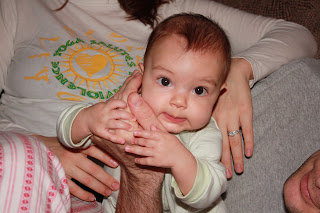 And, as promised in my last blog post, here are some pics from my brother's visit. Here's me and Chip swapping babies. 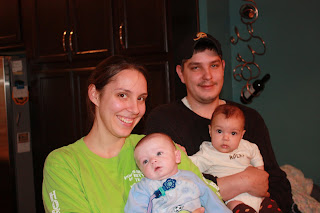 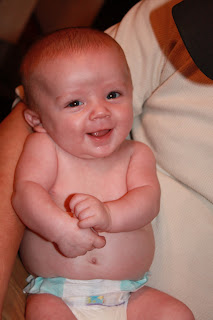 This ended up being quite a photo dump! Hannah's insane lack of sleep has prevented me from blogging earlier. Speaking of that...well, I had intended to update you on that as well, but this photo dump took a lot longer than I expected.  Fortunately, tonight was a good night.  Hannah went down pretty easily and quietly by about 10.  Last night was one of the worst--she screamed until 1:00 at which point I took her to bed with me, latched her on, and we both passed out.  I put her in her own crib at 2:30.  I had attempted to "cheat" MUCH earlier by taking her to bed with me but she refused. I was falling asleep at 9:00 while she was nursing and didn't have it in me to battle so I picked her up the secons she started screaming and tried to give her what she wanted, but it seems she just wanted to scream for a couple hours after which, she wanted to snuggle and nurse and sleep....I was hurting this morning.  I had to reschedule my trainer and take a nap this afternoon. Of course, wouldn't you know, 2 minutes after I laid down, Hannah woke up from her nap.  I got lucky though and she fell back asleep in bed with me while nursing. I woke up after a DEEP and dream-ful sleep after about an hour and felt amazing!  I've felt great all day, back to normal, hyper me!  Man, naps are awesome. I should take more of them.