I'm late with my holiday wishes!! I just didn't get around to it yesterday...We were also late getting holiday cards made so I made one on PowerPoint and then emailed it out, but for those of you who didn't get it, here it is: 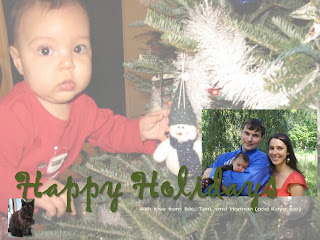 Here's Hannah watching a cartoon with her Uncle Justin.  He drove in from Michigan late on Monday night.  I was in the kitchen making a birthday cake for Eric (who was at work on his birthday--the 22nd). 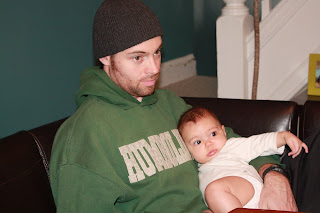 This is Hannah on Christmas Eve being smooched by her Uncle Joel.  She has now met all three of her uncles! 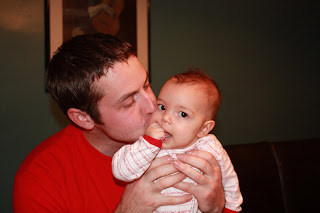 Hannah bought Eric a songbook of guitar songs to learn for his birthday so now all he has to do is learn to play 'em!  In the meantime, she's pretty enthralled by any musical instrument and got a kick out of watching Joel strumming. 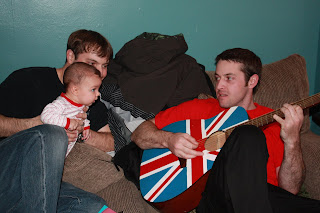 Check out this 18.5 pound ham we cooked for Christmas Eve dinner!!!  It came from a pig who lived a good life on a farm in Frederick and it was delicious!  Eric and I have now hosted two big holidays and have loved doing it! 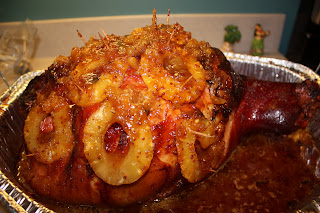 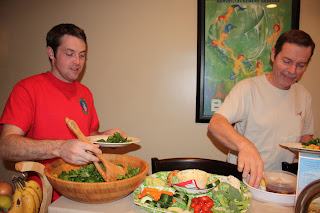 And now to Christmas Day!!  This is Hannah when she woke up on Christmas morning (still in her pjs).  She's not quite old enough to jump on everyone and wake them up to open presents, but we simulated that to get an idea of what the future has in store. 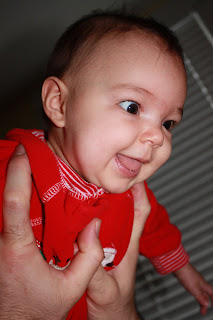 She really digs the chipmunk puppet Uncle Joel got for her. 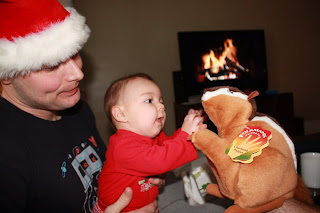 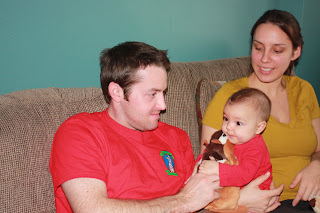 And Uncle Justin bought her her very first teddy bear--a super snuggly one! 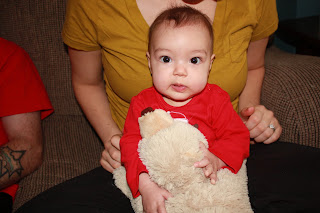 For Grannah, Hannah painted a picture frame at Amazing Glaze and stamped it with her footprints.  This was no easy task!!  We had to settle for slightly smudged on the one footprint after four tries.  We had intended to make these footprint presents for all the grandparents but the first was so difficult and time consuming, that we had picture mugs made for the other three grandparents. 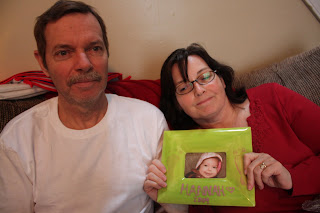 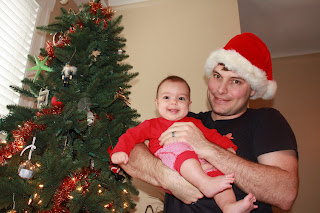 The scene in our living room... 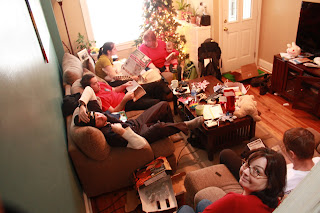 Grammy got Hannah some very tasty books and a really pretty hand-painted piggy bank that we for some reason didn't photograph... 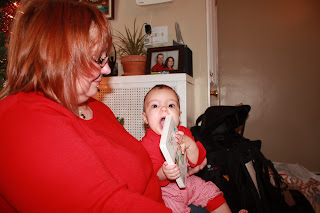 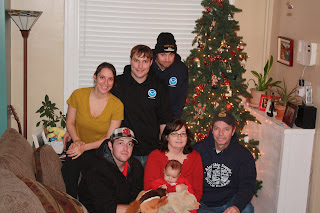 The non-Kellogg side...what do you call them???  My maiden name is not the same as my mom's last name so....anyway, my side (minus my brother and his family). 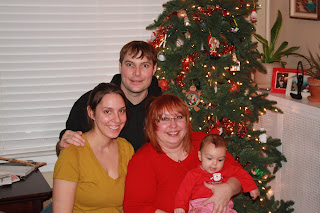 Hannah and her grandmothers and me (and a prime example of why no more than one person should be taking a picture at a time--this is the only one where we all look good, but we are all looking at the other camera--bummer!!). 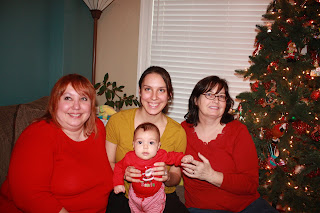 The Chipster and his family come today so I should have some more pics to commemorate Hannah's first Christmas!!  I hope everyone has enjoyed their holiday as much as we have!!