We've been snowed in since Saturday.  Baltimore is notorious for not taking good care of their roads in bad weather, but my street is especially bad because it is a small, single lane street so I'm guessing a plow couldn't fit up it if it tried, and I've certainly never seen one try.  Eric shoveled my car out of the 2 feet of snow that pounded us all weekend, but since my very steep street is still covered, I'm not sure I could actually get anywhere beyond the parking space. I suppose I'll have to throw it into reverse and just coast backwards down the hill and hope no one is coming up.  Usually when they are calling for snow I move my car to the bottom of the hill but I didn't even think about doing that this time, maybe because I knew I didn't need to go anywhere or maybe because I didn't really take the forecast very seriously.  We never get snow like this in December, do we?? I feel like it's usually February and March when we get our big storms.

Anyway, it was fun being snowed in.  My next door neighbor's parents were in town and they had this delicious wassle on the stove all day and bean soup and cookies....So we spent the  running in and out of Mary Cate's house.  And lucky for me, MC's mom knits so she was able to help me figure out how to crochet a stocking for Hannah.  I bought a book with a pattern, but that stuff is written in a foreign language.  I know how to crochet scarves and other flat objects but have never attempted anything harder and have never learned to follow a pattern. I bought the pattern thinking "how hard can this be? I'm sure the directions are simple and straightforward"....Yeah, right!  Although there are a lot of differences between crocheting and knitting, she was at least indoctrinated into the yarning culture and was therefore still a TON of help. I don't think I'd have figured it out on my own. So I prioritized the stocking while I had the help. I'm not quite finished yet, but am just about there.  I have no idea what to do when I get to the toe so if anyone has any advice, please pass along. When it's finished, I'll post a picture.

In the meantime, here's a pic of Hannah in her first big snow (she's being cuddled by MC's dad): 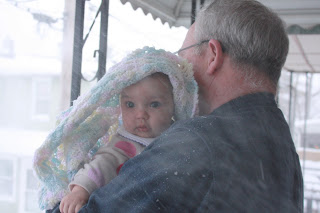 And although I'm not a football fan, if I were going to be cheering, it'd be for our home team.  Here's Hannah cheering for the Ravens (this outfit was in the boxes of stuff I bought off Craig's List): 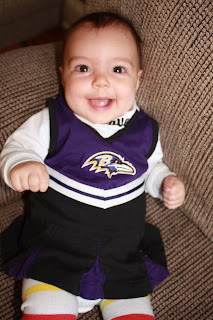 And a couple more miscellaneous pics (I love it when she has her fingers in her mouth and can't resist snapping a couple of shots): 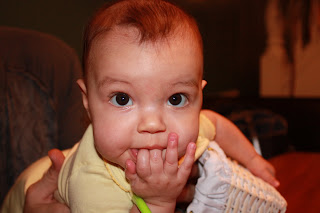 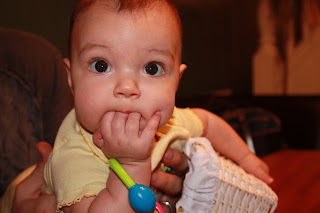 Speaking of sucking on her fingers, I don't think I've mentioned this, but Hannah does not suck a thumb (or forefinger like her mama did as a baby), but she does suck on the heel of her hand when she's trying to sooth herself to sleep.  Weird, huh?? I'll try to capture that sometime but since she's doing it when I'm putting her down for a nap or for bed, the timing is not conducive to mamarazzi tendencies...I'll see what I can do though.