QT at the City Park

Sunday was my brother's 28th birthday.  It was also the day that we decided to celebrate Mother's Day with our mom (that's how we roll--moving holidays around as we see fit).  So upon waking Sunday morning, Eric played with Hannah while I packed our stuff for the day.  When she showed the first sign of being sleepy, I changed her diaper, buckled her into her car seat with her lovey/blankie thingy, started the car, hit play on the Renee and Jeremy CD that I keep in the car CD player, and drove west.  She was asleep within about 15 minutes and without much fussing and woke up a little over an hour later as I was driving by my mom's house. (I was driving by it because I was going to cruise the dual a bit to give Hannah a chance to wake up naturally.)
Chip and Clay showed up shortly after us, and we all played with mom's itty bitty chihuahua for a bit before heading off to lunch.  From there we headed to the City Park for some play time.  I really love that park.  I think it's probably my favorite of Hagerstown's features, not that I know of any other features considering I haven't lived there since I was 18 and I rarely visit, but I think even if I did know of some others, City Park would probably still top the list.
We snuggled the babies into a swing together just for fun and also because Clay doesn't hold himself up too well yet--probably by choice because he seems like a pretty laid back little dude who's not too interested in working up a sweat.  He totally reclined back on Hannah and was even resting his head on her shoulder at one point.  That really confused her; she kept reaching her hand back and trying to turn around to figure out what was going on. 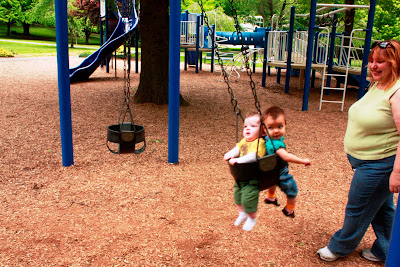 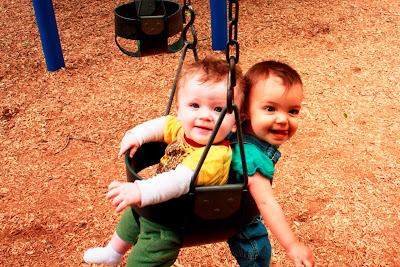 Chip didn't think Clay could sit in a swing on own his own but mom finally convinced him to give it a try.  The way those swings are built, I feel like they're safe for pretty much any baby of his size (he is over 18 pounds--2 pounds heavier than his cousin who is almost 3 months older than him).  Check out how laid back he is. Hannah's leaning forward eagerly and kicking her feet, and Clay's just chillin.  It's so funny how different they are! 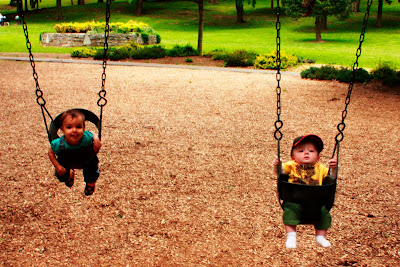 I love the following set of pics so I may have posted too many...As usual, I couldn't pick a favorite.  Grammy was doing something silly that was cracking Hannah up, and I caught Hannah in the midst of a couple of really cute giggles. 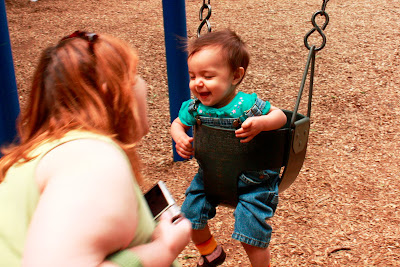 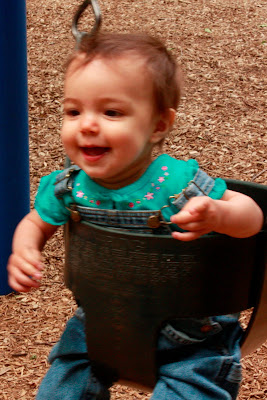 When we got tired of the playground, Grammy bought some duck food from the concession stand and we went off in search of a good duck-feeding spot.  Unfortunately, such a spot really doesn't exist because everyone and their brother feeds those ducks so they aren't particularly hungry and do not come flocking when you start throwing food like a flock of pigeons in the city or seagulls on the beach.  I was hoping for a big crazy flapping production for the babies' sake. The most excitement we came across was when we crossed the path of this mafia gang of geese who had a baby in tow themselves and honked loudly at everyone to get out of the way, or else.  We stood back and waited patiently for them to cross and get some distance.  They looked angry and serious and scary.  (Except the little one, it was just cute!) 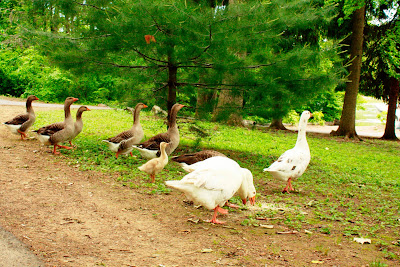 This little rocky enclave was one of my favorite places to hang out in high school.  I thought it would be a good duck feeding spot but there were no ducks around so we grabbed a bench.  This was when the Mamarazzi alarm went off, screaming "photo op! photo op! photo op!" so I passed the camera to mom. 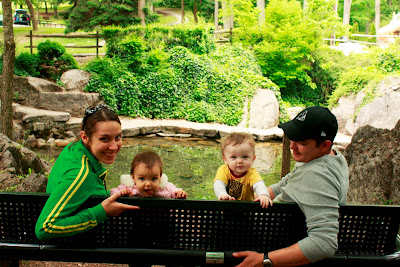 She snapped this mother/daughter profile without me knowing. 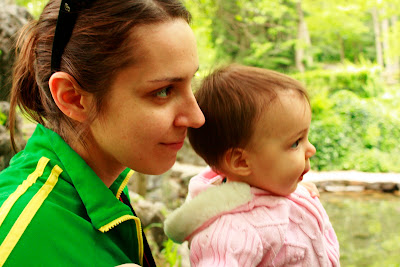 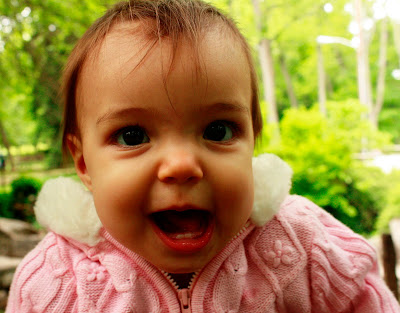 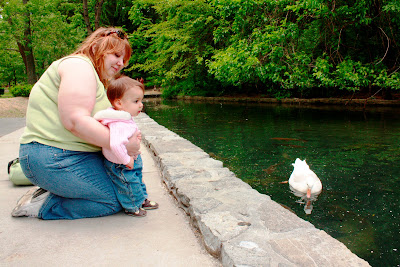 Chip really wanted to try to grab one of those insanely overweight fish by the gills and yoke it up out of the water but fortunately for the rest of us, he refrained from doing so. 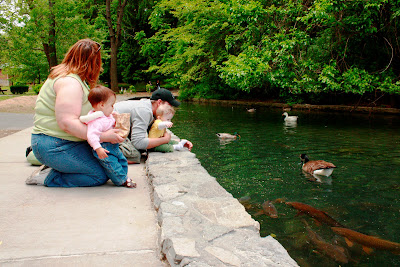 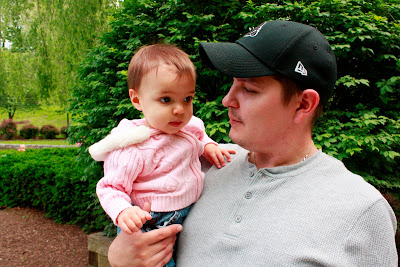 I love this one of Grammy and Clay. He's such a sweet, happy baby. 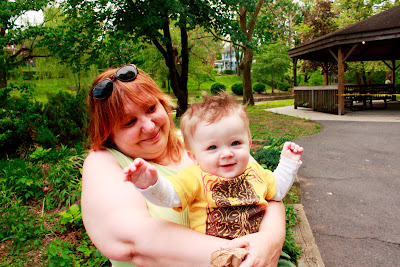 And I love the look on Hannah's face in this one; I feel like we'll see more like this when she hits puberty. 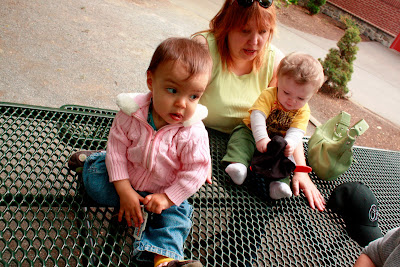 I love my dear ol' hubby and my sister-in-law, but I gotta admit, it was kinda nice to spend the day with mom and Chip and the babies. It was like in the old days when it was just the three of us, except with babies, so I guess that means it wasn't at all like the old days...but it was really nice.
After a couple of hours at the park Hannah started getting sleepy and rubbing her face on Grammy's shoulder so we headed back to the car, changed her diaper, handed her her lovey/blankie thing, hit play on the CD player, and drove home.
Posted by terri at 9:07 PM