Teaching Hannah to Stop and Smell the Flowers (and to Take a Nap While She's at it!!) 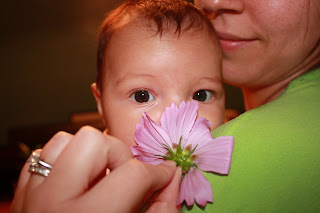 Bedtime that night was insane. Hannah, as usual, didn't nap much that afternoon so I decided to try to put her down a little earlier (like 9ish instead of 10ish). This bedtime would also make tonight easier (Grammy is babysitting so we can go see our favorite band in the world play at Ramshead Live). I was hoping to have Hannah asleep before we left the house but I'm realizing now that that is not likely.

Back to Tuesday: we bathed her at 8:15 instead of 9:00 and instead of showering first and then bathing with her, I just bathed her. I don't know if it was going to bed early or the difference in routine or what, but she lost it and refused to eat her usual amount after her bath. Maybe she wasn't that hungry because of the time difference or maybe she didn't like it that I didn't smell freshly bathed like I normally do during our night time routine. Who knows??? This kid is SENSITIVE! Did I tell you she flipped out the other day when Eric sneezed?? She did. I was standing with her when he let loose a big ol' sneeze and her face scrunched up and she let out this ear pitching wail. It took me a while to talk her off that ledge. So yeah, I have no clue what the issue was on Tuesday but she lost it and just got more and more hysterical despite my snuggling and cooing and loving. Eric finally got home from his double-header volleyball game around 10:30 and rushed into the shower right about the moment that I was losing it with Hannah. I grabbed my iPod and headphones, put on The Avett Brothers, cranked up the volume to block out her screams, and paced the upstairs hallway patting Hannah on the back and singing. Eric showered quickly and relieved me. I switched over to some peaceful meditation music 9thanks Jess!) but kept it loud and then went into our room to journal my insane I-suck-as-a-mommy thoughts. I felt bad because I knew Eric was tired from a long day, a long commute, a long night of volleyball, and from fighting a cold. It was late and he has to wake up at 5:15. I really don't know how single moms do it. I really thought I'd be much better at it.

Hannah fell asleep in his arms in the bed in the nursery and he nearly fell asleep with her. She woke up screaming when we tried to move her to the bassinet in our room, and by this point I felt guilty and worried that she knew I'd gotten mad at her so I insisted that Eric give her to me for a snuggle and a feeding and that he get some sleep. This time she didn't refuse my boob, she latched right on and ate hurriedly before calming down and finally dropping off to sleep. Guilt assuaged. Whew.

I was exhausted and mentally drained the next day, but a good thing happened: Hannah napped all day! Maybe it's because we didn't leave the house so she didn't catnap, maybe it's because I was sitting around just hanging out with Amy so I was quick to notice her "I'm tired" signs and put her down when I saw them. Whatever the reason, after being awake for about an hour and a half, I'd put her in her crib and she'd sleep for about 2 hours. She took her normal 3-hour morning nap plus an afternoon nap and an evening nap. It was awesome. And she still went to bed by about 10ish and slept for 5 hours in her crib before waking up to eat. I'm considering Wednesday our most successful sleep day yet and am hoping I can repeat it today.

Other good news: Eric got Hannah to take a bottle twice! She took one on Monday while I was at the gym and another yesterday 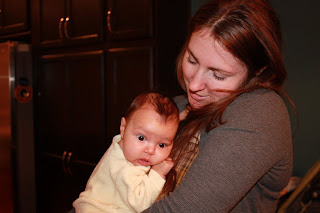 again while I was at the gym. I'm not sure what his trick is; when I asked, he just said that he fiddled a lot with the temperature (did I mention that she was SENSITIVE??? apparently she is like Goldilocks and will only eat if it is JUST RIGHT) and also snuggled her in really close to his chest.

Oh yeah, and I started going back to the gym last week. I went 3 days in a row (Sunday, Monday, Tuesday) and ended up super sore and lethargic by Wednesday so I took a 5 day break and started back again on Monday of this week. My new goal is to go every other day. That seems doable time wise and physically. I am feeling a lot better now that I'm moving and sweating and getting a little me time, and I think Eric is enjoying his QT with Hannah. Although I usually leave while she is asleep, she wakes up about a half hour before I get home which is enough time for him to give her a bottle and snuggle her a bit.
Posted by terri at 12:00 PM