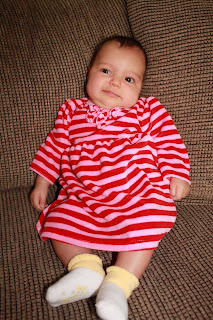 I was pooped on this morning, sort of. While standing at the stove waiting for my tea kettle to whistle, an explosion rumbled my forearm which was propping Hannah up. I giggled a little (yes, I still find it funny that farts of that decibel emit from her teeny little hiney) and began pouring water over my Get Maternal tea bag (a yummy red tea) and just as I was doing so, I felt something plop onto my foot. I looked down at the yellowish blob that had dropped onto my foot and wondered if this renegade poo had comrades who would be following shortly....I put the tea down and walked slowly back to her bedroom to remove the outfit I had just put on her and wipe the poo that was running from her diaper down her leg. Outfit number 2 is shown here. It's a strange but soft dress that makes her look like a character from a Tim Burton movie or a Roald Dahl book. I'm not sure what the point of a long sleeve dress is though. I mean, if it's cold enough for long sleeves, it's probably also cold enough for pants. I guess I could put a pair of pants under it because it's no big deal if she looks silly and clashes at her age, but pants kind of annoy me. You gotta take 'em on and off every time you change her diaper and that's an added step that I just can't be bothered with (Eric either: I put pants on her yeserday, just to give it another try, and she came down from her first diaper change sans the pants). That's where the Baby Legs come in really handy. I love those things and used 'em a ton toward the end of summer, but both pairs would look really ridiculous with this dress (I know I just said I wasn't trying to make a fashion statement with a baby but seriously, the baby legs we have are Jelly Bean and Rye....look 'em up, they'd look ridiculous), and also, now that it's cold enough for her to wear socks, I'm finding leg warmers to be a bit of pain too. Really the only thing I can be bothered with dressing her in is those 1-piece footed sleeper things. They look so warm and comfy! If I were a baby, that's what I'd want to wear. Of course, this is coming from the person who spends a little extra on "nice" sweat pants so that I can leave the house in my lounge clothes and maintain a teeny tiny bit of dignity (just ordered these yesterday and this to go with--yes, pricey, but I assure you I will wear it every day and anyone who's seen me in what Eric and I have dubbed "my uniform" will attest to this). I must also admit that it's my own laziness that dresses her in those. Why deal with three articles of clothing when I can choose just one? My only dilemma with the footed sleeper thingys is: zipper or snaps? I can't decide. See, the thing about a zipper is that the leg on the non-zipper side can be hard to scrunch up and direct into the leg hole. Also, you have to unzip the whole thing to change the diaper which, in cold weather, is not nice because it exposes her whole chest and belly (not that I plan on changing her outside or anything, but still). Of course the advantage to the zipper is the speediness with which it zips. Snaps are time consuming and can be tedious expecially when the average baby outfit has 63 (minor exaggeration). But you only have to unsnap the ones around the legs when you want to change the diaper so her chest stays covered and there's no difficult directing of the leg into the leg hole.

I don't know where this silly clothing rant came from, but I'm not going to apologize because you should be quite grateful this is what spewed out of me given the fact that I've been crying for what seems like days now. I think the 5 days of cold dreary rain coupled with sleep deprivation and a screaming child (yes, sleep deprivation--the sleep training is going terribly which is what I thought this post would be about) and what I've always thought might be a smallish case of seasonal affective disorder have short-circuited the neurons that link sanity to sanity in my head and left me a blithering idiot who cries almost as much as her soon-to-be 11-week-old daughter. See, I always thought that my ability to create structure and routine would be a positive asset in motherhood because I think children thrive under structure and routine, and while I still think that, I'm finding that there is a big difference between children and infants, and I'm also find that a successful mother of an infant is one who is flexible and able to adjust her schedule around her baby's until that baby can start to adjust to the one set up by the mother.
Flexible is not an adjective that I would ever in a million years use to describe myself.
Posted by terri at 2:24 PM