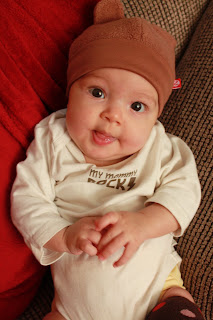 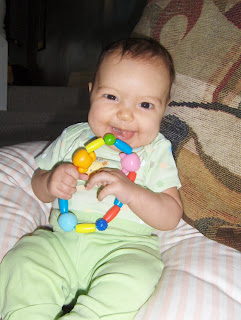 Just minutes ago, this itty bitty baby of ours rolled over ALL BY HERSELF!!! I laid her in her bed on her belly (don't tell the pediatrician) and she instantly rolled up (slowly) onto one side. I called for Eric to hurry and get up here because she's been trying to roll over for a week now but is unable to get up on her side--once on her side, the rest is a piece a cake.  Sure enough, just as slowly and deliberately as she rolled onto her side, she rolled over onto her back.  It was crazy and amazing!  So I rolled her back over onto her belly in the hopes that she'd do an encore performance for Eric but no such luck.

She's been moving a lot lately.  I watch her in the video monitor as she inch worms her way from one end of her crib to the other, pausing only to wiggle her butt up high and attempt to throw her weight to one side or the other. And when we put her in her chair she immediately hoists her hips into the air and starts ooching her way down and precariously close to the edge of the chair.  I have to strap her in now during naked time if Eric isn't there to make sure she doesn't ooch right off the end.  AND, when I'm holding her tummy to tummy with her head on one of my shoulders, she digs her toes into my stomach and tries to walk up me.  All this silly moving really cracks me up.  I'll try to get some video.

The first pic is her in her new cute, warm bear hat that Mary bought her--Thanks Mary!  My mom took the second pic this weekend.
Posted by terri at 9:25 PM