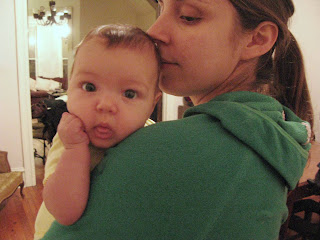 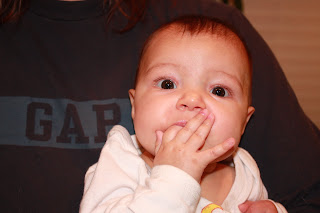 So much for treating blogging like my job this weekend. It's Sunday night, and I'm realizing it's now or never because another week is about to start...The weekend slipped away pretty quickly...as usual.  Hannah is crying right now so I'm not sure how long I have.  Eric is trying to calm her.  She was asleep on the boob after a good meal but she woke up just before her head hit the mattress and has been crying since. This has happened the past 3 nights.  She's been up till nearly 11:00 for 3 nights running.  It's exhausting.  Prior to that she was doing great. Our crib training routine was awesome for about 4 nights.  She was in bed between 8:00-9:00 every night.  She woke up to eat sometime between 2:30 and 4:00 and then went back to sleep (the first 3 nights she was up for an hour while we were getting her used to going back to sleep in her crib rather than our bed and the fourth night was perfect--she went immediately back to sleep in her crib after eating) until about 7:30 in the morning, 9:00 one crazy morning.  Then it ended...she is still sleeping till between 2:30-4:00, eating, going back to sleep in her crib (though not as easily as that one night--it usually takes us 45 minutes to an hour to get her back down), then waking up at 7:30, but bedtime is a nightmare. I don't know why she fights it so much. It doesn't matter how we adjust her day, bedtime is a complete nightmare. On the bright side, at least the crib thing has gone well! I'm sleeping much better and much deeper now. 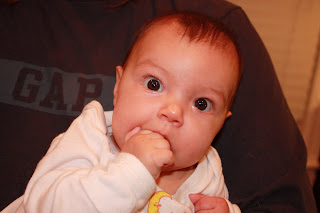 I'm wondering if her bedtime freakouts have to do with the fact that she seems to be getting a headstart on some teeth.  All the signs have pointed to that for the past couple weeks--excessive drooling, drawing everything into her mouth to chomp on it (including her fingers and as much of her hand as she can fit--see photos), and crankiness--but I assumed she was too young to cut teeth so I dismissed it.  Grammy came to visit today though and when she saw that drool, she said teething.  We bought some homeopathic teething gel and have been applying it this evening.  I'm not sure it's helping.... 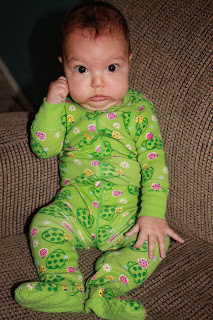 Actually, come to think of it, I don't think it's the possible teeth that are keeping her up.  Eric just yelled down that she had a two huge poops and lots of burps in the few minutes that he'd been up there. His immediate thought is that she's having a reaction to the gel but it reminded me that the same thing has happened the past two nights.  She has stopped pooping in the morning and has started pooping at bedtime....Time elapsed; I'm back now and she's asleep (it's 9:04) so at least we're not starting off the week with a late night. It was only an hour of screaming and pooping and burping and soothing.  Poor girl. 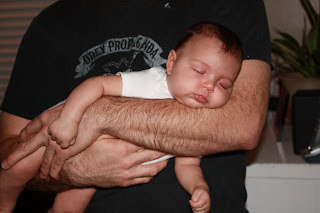 In other big news (pertaining to us), I got my IUD implant on Wednesday.  I chose the copper one because it doesn't have hormones.  Hormones are the reason I went off the pill a couple of years ago (and the reason we now have Hannah).  Pros of the IUD is that it's supposed to be more effective than any other method of birth control and it lasts for 10 years once implanted. Plus you don't have to remember to take a pill every day.  The other pro is that you can get pregnant immediately after removing it whereas when you're on the pill, doctors recommend waiting 3 months to get the pill out of your system so as soon as we decide we're ready to give Hannah a sibling to play with, we can get working on that!  Not that I forsee that happening anytime soon.... 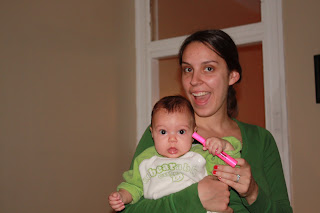 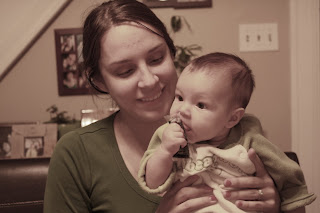 1.  The first photo was taken by Laura at her house last Tuesday.  She thought it was cute how Hannah was holding her head up with her hand, and although I couldn't see it at the time, I agreed after seeing the photo!

2. and 3. I'm loving how she looks chewing on her hand (which is happening all the time these days) so I had to capture it.

5.  Passed out in daddy's arms late in the evening...After taking the pic we woke her up and started the bedtime routine.

6. and 7. She's really starting to be able to hold onto stuff and I'm having fun putting things like highlighters and soy sauce packets in her hand....
Posted by terri at 9:38 PM