I'm going to try not to get too excited because if life with a baby has taught me anything, it's one step forward, three steps back.  Good nights can be as much of a fluke as bad nights, but last night was AWESOME!!  Last night was the 3rd night of the Sleep Lady Shuffle (though Eric, for lack of understanding kinda undid night 2 so we might have to add in a 4th night positioned right next to her crib before moving to phase 2).  Hannah fussed--but never cried hysterically--for 15 minutes and then fell asleep at 8:00 on the dot and slept until 7:30 this morning!!!!!!!!!!!!!!!!!!!!! Of course, I still woke up pretty frequently because I'm conditioned to do that, but if she keeps up these good sleep habits, I might regain my good sleep habits as well. 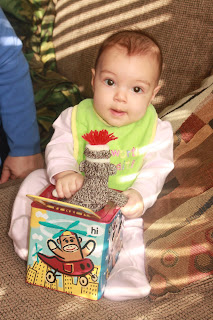 For the past 2 days, we've modified the schedule proposed by the Sleep Lady because of Hannah's incredibly short cat naps.  Like the Sleep Lady, we keep her awake for 2 hours between each nap except at the end of the day when she is awake for 3, but since she doesn't sleep for 90 minutes at a time like she's supposed to, she gets more naps and more awake periods than the Sleep Lady routine.  Yesterday she woke up from her last nap at 4:45 which meant she needed to be ASLEEP (not getting ready for sleep) by 7:45.  We started bathtime at 6:45 and had her in her crib right at 7:45 (so I should have had her in her crib sooner to allot for the crying) and she was alseep by 8:00.  Not too shabby!

In addition to trying to adjust her night time routine so that it doesn't consist of crying, I want to lengthen her day time naps.  She's gotten into the habit of taking 30-40 minute naps which the Sleep Lady calls "disaster naps" because they allow her just enough energy to fight more sleep but not enough to do much else (and they certainly don't allow me to do much of anything).  I'm hoping that her naps will start to fall into place as her night time sleep begins to improve, and as of today, it's looking like my hope might be fulfilled because her first nap was just a few minutes shy of 90 minutes so as of right now, she is following the Sleep Lady schedule.  But if today's naps are a fluke, I'll work on the lengthening-naps issue after I feel pretty certain that we've got a handle on the night time sleep.  Unfortunately, Sleep Lady doesn't provide a lot of advice on how to deal with these disaster naps so I'll have to wing it. 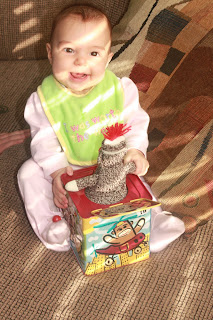 Here's our night-time routine for those of you who are wondering: after bath we gob on the butt paste to prevent irritation from a full night of peeing in the same diaper, then we diaper her, then we use baby lotion to give a calming baby massage (sometimes this is hurried depending on how eager she is to eat ), then I feed her (I used to do this with only the hallway light on but last night I decided to leave the bedside light on hoping that the act of turning the light off would further signal "bed time"), then I burp her really good and, depending on her mood, I'll do guide her through some baby yoga stretches to further aid her digestion, then I read Goodnight Moon (often while carrying her around since she has little interest in looking at the pictures in the book at her age), and then I lay her down.  The other benefit of keeping the bedside light on is that it discourages her from falling asleep on the boob.  The Sleep Lady's focus is on coaching babies and children to learn how to put themselves to sleep.  Once they learn how to do this, they can also put themselves back to sleep when they wake up in the middle of the night (rather than requiring you to wake up repeatedly to rock them or nurse them back to sleep).  To do this though, you can't let them fall asleep on the boob; you have to lay them down "drowsy but awake".

Other things I've changed: we've been using the humidifier thing for about a month now because the heat pump has made my nose very dry so I can only imagine it's doing the same to her.  Also, we now use a fan in her room as a white noise machine.  I started this over the holidays when we had house guests because noise travels in this house like you would not believe and I didn't want to require everyone to whisper.  She didn't seem to mind the fan, and I liked that it masked the sound of cupboards in the kitchen closing and the ice machine in the fridge (like I said, noise travels like you wouldn't believe).  It also masks the washer running and me tip-toeing down the hall to use the bathroom (which is right next to her room). (When I first brought her home I wanted her to get used to the noise in the house around her so that she'd be able to sleep through it and not be addicted to a white noise machine like her mom and also so that we wouldn't have to adjust our actitivies too much, but then I read something that made me realize how rude that was.  Both the Baby Whisperer and the Sleep Lady point out that you wouldn't want to sleep in the middle of a train station so why would you be so insensitive to your child and expect them to sleep through chaos?  I realized that they're right; it's only polite to provide a peaceful sleep scenario.)  I also often open her bedroom door before going to sleep in an effort to regulate the temperature in her room.  It stays colder on that side of the house so for a while I was in the habit of kicking on the radiators right before bed to warm up her room (and then just using the heat pump for the rest of the night because when the radiators kick on with the door closed, that room turns into a sauna in no time). If I leave her door open, when the radiators kick on, the heat they put off spreads out into the hallway, and since the fan is on, the noise of the radiators doesn't startle her out of her sleep.  Also, since the thermostat for the heat pump is in the hallway upstairs, if I leave her door open and our door open, it allows the thermostat to get a better read on the actual temperature and keep it where it's set in the bedrooms as well as the hallway.

Ohhhhh, I almost forgot--we decided to get a jumpstart on the real food thing.  I was pretty anti since all the books say 6 months and since I'm such a good rule abider (Hannah will be 6 months on February 5), but both Eric and I have been pretty eager to get her started on real food and when we were at the pediatrician for her 4-month checkup, the pediatrician said we could start "experimenting with different textures" (which she later clarified meant starting her on solids) whenever we wanted.  So yesterday I baked a sweet potato, ground it up in the baby grinder machine, thinned it out with some breast milk, and tried to feed it to Hannah.  As was expected, she wasn't thrilled.  See for yourself: 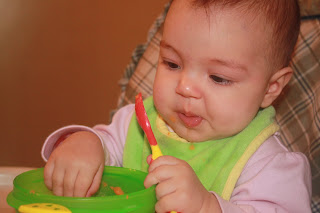 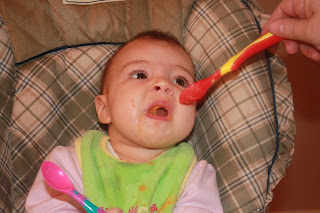 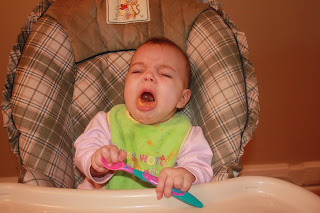 When she wakes up from this nap, we'll try to give her a little more.  We'll do that every day for 2 weeks before we introduce a new food. That or I'll give up and try to make my own rice cereal (I'm very adverse to feeding her processed food from a box at this young age and would prefer she eat only whole foods).

I'm taking votes on what her next food should be!! Whaddya think? Pears? Oatmeal? Squash? Avocado??
Posted by terri at 1:14 PM