Houston, We Have a Tooth! (And a TON of other Ramblings...)

After months of everyone short of the bagger at the grocery store telling us "she's teething" based on her extreme drooling and the urge to shove everything in her mouth, Hannah actually has a tooth coming in.  I felt its sharp beginnings on Saturday.  It's exciting to have a new development, but also a bit daunting since teeth are kids' number 1 weapon (whether ill intentioned as in toddler years or merely gnawing through the baby years).

As for sleeping, we are settling into a bit of a routine--bedtime is at 8:00 and she wakes up at 6:00.  Naps are still pretty unpredictable, but they're getting better.  She usually goes down for a morning nap at 8ish and has been sleeping for about 90 minutes, sometimes almost 2 hours.  After that it's a crap shoot though.  Sometimes she takes an equally good afternoon nap, sometimes not.  Either way, my main goal of taking back my grown-up time has been accomplished (hence this incredibly long post).  She now goes to sleep within about 15 minutes rather than screaming for a few hours.  Also, my second goal of weaning her from nighttime feedings is going well--she hasn't eaten between the hours of 8 and 6 in about a week, and her daytime feedings have improved significantly.  She still wakes up at night but I'm hoping that will pass eventually... 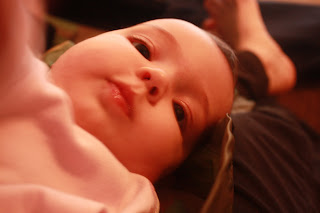 As for food, I decided to make sweet potatoes in bulk the other day.  I really don't know why people buy baby food--it's expensive and not THAT much more convenient.  I mean, think about it what goes into just making it yourself: I peeled a sweet potato, wrapped it in foil, shoved it in the oven for about an hour, let it cool, then pureed it in my new blender (xmas present) with some of my finest milk, poured it into an ice cube tray, froze it, and then this morning I popped out the cubes of sweet potato and stuck 'em in a ziplock bag in the freezer so I can defrost them two at a time as needed.  The actual work time involved in the above steps was incredibly minimal and what's the cost of a sweet potato? Like 50 cents or something?  I haven't checked out the cost of baby food in too much detail, but I know it's like over a dollar for one jar.

I got so excited that I decided to try my hand at making rice cereal.  My mom sent me a site (I think it was a blog) that had a recipe for rice cereal that was really dumb.  The person suggested grinding "some" rice in a coffee bean grinder and then adding "some" water and boiling...I'm not a fan of instructions like "some."  I need exact numbers.  What is the ratio of water to rice?? Anyway, Eric's coffee bean grinder is coated in coffee bean dust and I'm fairly certain that no amount of scrubbing would get every last dust particle out so I decided to just make rice and then toss it in the blender with more of my finest milk.  Voila!! Homemade rice cereal for a fraction of the cost! Again, I didn't check the actual cost of baby rice cereal, but the bag of brown rice I bought was like $1.99 and I only used 1 cup out of the whole bag and didn't even use all that to fill one ice cube tray so that's like pennies per meal.

I know, I know, you're probably saying to yourself, "rice cereal?? That wasn't on the list of poll options!!" And you're right, it wasn't because it wasn't an option at that time because for some reason it never occurred to me to make it myself and like I said in a previous post, I didn't want Hannah to be eating out of a box at such a young age.  I would have made the oatmeal today instead of the rice cereal (since it looks like that's gonna win) but I don't have any steel cut oats.  I just have the Bob's Red Mill regular oats and I think I should use steel cut, but I should probably research that.... 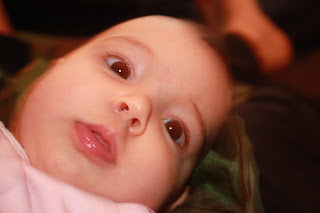 I finished a hysterical book tonight that I recommend to all my preggo readers.  My mom got it for me for Christmas. It's called Sippy Cups are Not for Chardonnay.  At first I was kinda bummed that it wasn't written in story/memoir style (like It Sucked and Then I Cried which I LOVED--thanks Libby!) but the author is so friggin funnny that I quickly got over it.  It's written more like a guide with various scenarios that you will encounter and really funny advice for rolling with the punches.  There was a lot of stuff that I could relate to and other stuff that I haven't been through yet.  Here are some funny tidbits:

"Whether you breast-feed or not, you need to be prepared to encoutner the Tit Terrorists."

"My husband and I, paranoid first-time parents that we were, took a safety course for infants and came away with all sorts of new fears.  The biggest one was that our baby would surely suffocate if we put crib bumpers in her crib. The bumper police had us convinced that babies' faces are drawn to bumpers like Tara Reid is to apple martinis.  It's absurd.
Take it from me: You need crib bumpers, and not only because they look cute with your choo-choo train crib sheets.  You need crib bumpers so your little baby doesn't get his little leg stuck through the bars of the crib, or bump his ahead against the rails like a mental patient in a SpongeBob SquarePants-themed institution.  Nothing is sadder than looking through those bare bars, like it's visiting hours at the state prison. Believe me, that will come soon enough.
If you're scared of bumpers, chances are you also think blankets in the crib are the Antichrist.  You should know that a lot of people swear by them for their warmth and cuddle factors.  If you're really worried, try a crocheted blanket.  Even your little genius will never figure out how to suffocate in that.
But I accept that with the level of paranoia these days, some people won't relax unless their baby is completely naked, sleeping on a fully enclosed cement slab with no teddy bear in sight. Good luck with that."

"But if your feelings get out of control or if you experience depression for more than a couple of weeks, you probably need help to get over it. Hell, I need help to cope when I have no new messages on my voice mail, so there is nothing wrong with seeking medical attention for depression. However, if you find that you're feeling tired all the time, you're overwhelmed and irritable, and you have virtually no sex drive whatsoever, welcome to motherhood, my friend."

"Picture your marraige as a quiet country lane and your baby as a Hummer. No matter how careful you are, there's gonna be roadkill."

"I knew every second of every day where my baby was, and what she was doing, as if I'd been equipped with amental LoJack that was always monitoring her. I know my husband was devoted to our new baby with every fiber of his being, but I couldn't believe his ability to walk in and out of a room with ease. I'd watch with fascinantion as he'd go from the living room to the kitchen to the bathroom and into the bedroom to watch TV, as though he didn't even have a baby!  I was annoyed at his ability to relax. I felt like saying, "Didn't you get the memo? WE'RE PARENTS NOW! LOOK ALIVE!"

Okay, I could seriously quote the entire book so I better stop now. I thought I'd just type a few things up but got a little carried away....

The only other thing on the "to blog about list" is that I think Eric and I have worked out a good system that will enable me to keep my job AND my mind.  On his two days off, I'm going to work straight through from 8:00-1:00 which will mean I have 3 other days to spread out  my remaining 9 hours.  Today she only napped for 2 hours and 55 minutes so if this were one of those 3 days, it would have been a close call and an exhausting day of back and forth, back and forth, but it should help.  Also, on his days off, I get to go to the gym.  So that means that 3 days out of the week, I'm on duty all day, and 2 days out of the week, he's on for most of the day, and when the weekend rolls around, we're both on.  Today went really well.

And now that I've been blogging for like an hour....I blogged straight through my coveted grown-up time.  That's probably enough.  Good night.
Posted by terri at 9:17 PM