We are trying what the Sleep Lady calls the "extinction" method.  This is a fancy way of saying "cry it out." (Unlike Ferberizing which has the parent returning to the room at longer and longer intervals, the extinction method is an infinite cry it out.  It's pretty rough. But the statistics behind it show that it works because it is consistent--you consistently don't come in and they learn much faster to stop screaming for you.).  I hate it. I think it sucks.  But last night was another terrible night. I attempted to just stay close and pat her butt to keep her calm, but she lost it and cried hysterically for 2 hours and refused to be consoled by anything I did until she was good and ready to be consoled and I completely lost my mind after about 1 hour and yelled at Eric because he wouldn't put her down for a nap earlier when I asked him too and then I went in our room and slammed the door so I couldn't hear the crying and then I felt guilty so I went back into her room and rocked her and cried with her at which point Eric came in and took her from me and I went and laid down all the while knowing that I would be needed again to finally put her to sleep but enjoying the short break.  After a half an hour he gave up and returned to bed and after about 7 minutes of her screaming, we both returned to her room, changed her diaper, wiped her faced with a cloth, and then I rocked her and calmed her down and put her to sleep.

So tonight I made sure she wasn't awake for too long before starting bedtime and I was meticulous about doing EVERYTHING right.  I bathed her lovingly, gave her a loving little baby massage, dressed her lovingly, fed her her lovingly all the while holding her hand, did some baby yoga exercises (lovingly) when she was finished eating, lovingly read her I Love You Stinky Face and since I have the book memorized, I just stared lovingly into her eyes while reading it which she adored, then I laid her in her bed (lovingly) and hummed Kumbaya and patted her butt, and at first everything was normal.  Normal is: she lays her head to one side and begins sucking the heel of her hand but will, every 30-45 seconds or so, lift up into baby cobra and scream, then lay her head back down, back and forth for a couple minutes before settling down and going to sleep.  So I'm patting her on the butt and humming Kumbaya and she's doing her typical up and down routine and my routine is to gently and gradually decrease the firmness of the butt pats until I'm just barely patting at which point, I stop and wait a couple seconds before tip toeing out of her room.  Sometimes she fusses and I have to resume patting or risk an all out screaming session.  She is never fully asleep when I tiptoe out, but she's drowsy enough to put herself to sleep easily.  This is how I put her down for a nap. I've gotten very consistent about it the past 2 days.  I've also gotten very rigid about making sure she is not awake for more than about an hour and 15 minutes, hour and a half tops (except for her last period of awakeness in the day).  As a result, she is back to napping for between 60 and 90 minutes rather than those crazy 30 minute cat naps she was doing for a while.  She is much better rested and happier while awake.  I don't know why the butt pat Kumbaya hum routine doesn't work at night.

Okay, I finished that paragraph and then went back upstairs.  I couldn't take another minute. I let a full 30 minutes pass which probably earns me some sort of Cold-Hearted-Insensitive-Worst-Mom-of-the-Year-Butthead medal. So I broke at 30 minutes, wiped her face with a warm wash cloth and flipped her to the other side of the crib so she had a dry place to lay her head.  Be proud: I did not pick her up. Just wiped her face and flipped her and started patting her butt and softly telling her "It's okay.  Everything's okay. Mommy loves you and is right here.  Deep breaths sweetie.  Let's get some sleep..." etc.  She calmed down instantly. I stayed for about 10 minutes anyway just to make sure she was good, which may have meant that I ended up putting her to sleep after all...But I'm not gonna beat myself up about it. She put herself to sleep for all of her naps yesterday and today so I know she can do it, she just chooses not to at bedtime for some reason....

On a brigher note, I have pics for you today.

Look at her trying to sit up on her own! She's really starting to activate her core and is able to pull herself up from a 45 degree angle (that's not what's pictured here though--here I jus propped her up using a pillow and the boppy but she refused to lay back, insisting instead on wobbling on her tailbone). 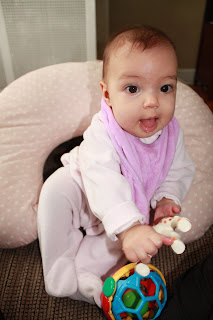 And then I just got snap happy.... 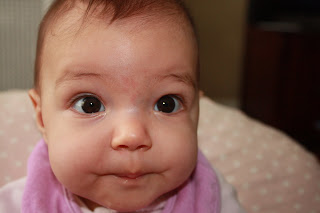 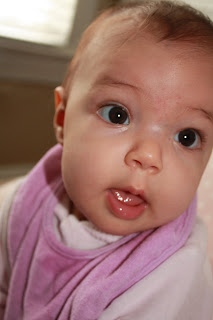