Another First: Beach (and Chicken Stock)

As another weekend rolls in, I'm still summing up last weekend...On Monday (a..k.a. Second Sunday in the Kellogg household) the neighbors took off work and we all headed to the beach.  We drove about 30 minutes north east of where we live in the city to Hammerman beach which is part of Gunpowder State Park.  Our neighbor, Amy, goes there a lot, but it was a first time for the rest of us. I've spent the past 10 years or so lamenting about the lack of swimming holes in Baltimore.  Last year I discovered the beach at Oregon Ridge which is pretty nice, but since it's basically a quarry with lifeguards, and quarries freak me out a little bit.  I once went to another quarry out near Reisterstown (north west of the city) that had a really cool zip line and tarzan ropes, but was otherwise pretty unimpressive.  As such, I had low expectations of Hammerman.  I'm happy to report that it totally exceeded those expectations! Whether because it's actually nice or just because its only competition is a couple of quarries, I don't know, but I was really surprised and pleased.  It's this HUGE area with tons of pretty trees and lots of playgrounds and a constant vista of the...bay?? I guess it's the bay. Or a river that leads to the bay? I don't know, but it's huge which makes the view really pretty (the quarries are pretty small and feel a bit claustrophobic to me).  Another bonus is that we got into Hammerman for free when Eric flashed his military ID.  That little card is magical and hooks us up all over the place.  Without it, we'd have paid $6 each.

Love the look of sheer delight on her face in this first one. It was taken seconds after entering the water.  Her hair isn't even wet yet. (Also, notice Eric's farmer burn....that's from working out back without sun block. He's had one farmer burn after another this year.)  And yes, the water is on the murky side of murky but this is Maryland people! Not some tropical island.  There is no un-murky water to be found in these parts. 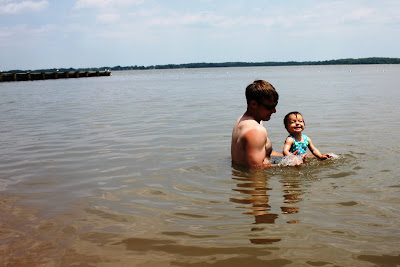 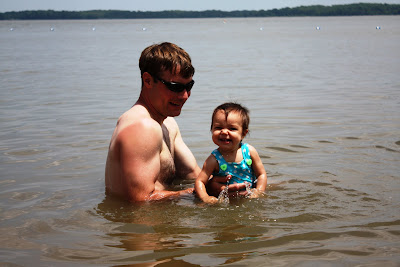 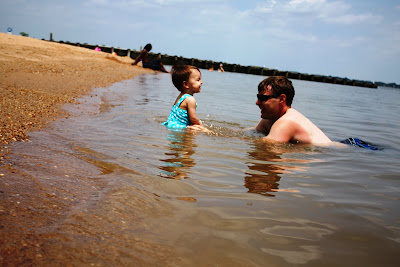 Before we left that morning, Eric ran to the store around the corner and grabbed some beach toys 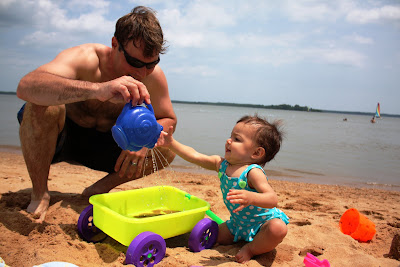 I realized pretty quickly that I'd forgotten to bring her hat down to the water with us (you may have noticed her bare head in the above pics and already been wagging your finger and clucking in my direction).  I sent Eric up to the picnic tables for the hat. He decided to walk a few steps farther to the car and grab the umbrella too. She has her whole life to get sun poisoning, let's try to stave it off for as long as possible. 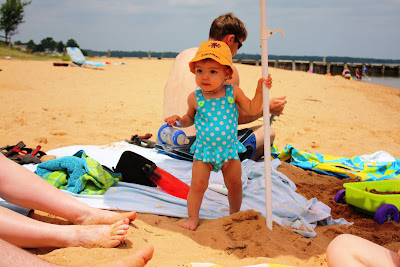 Here you see a rare photo of the parents together all thanks to Mary Cate getting behind the camera for a bit. 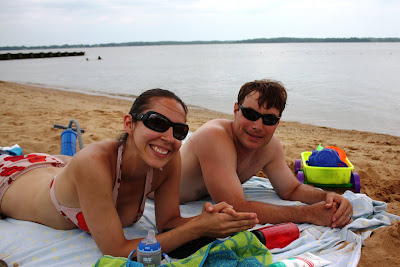 The next couple pics were also taken by MC. 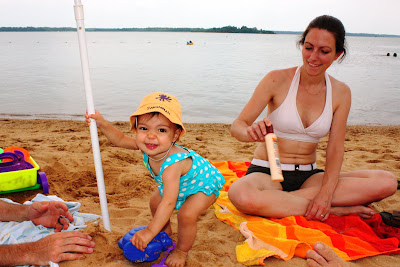 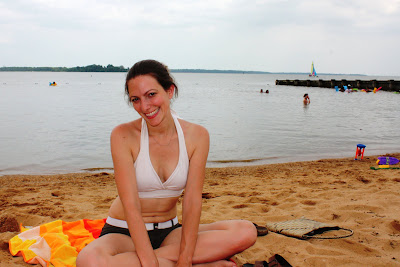 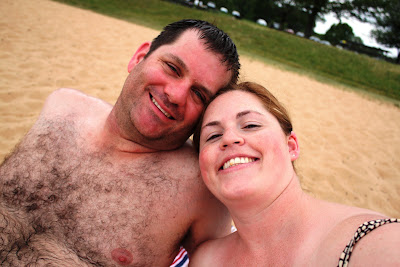 The clouds rolled in for a bit which was actually kind of nice since it provided more respite from the blazing sun than this wimpy umbrella that Hannah tried to tear down. 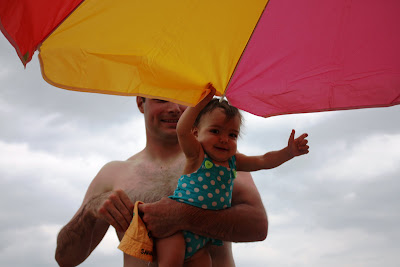 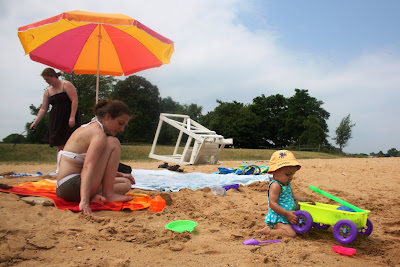 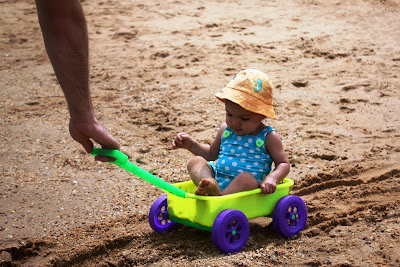 Eric wanted to see if the cheap little dime-store wagon would float...I think we all know the answer to that one... 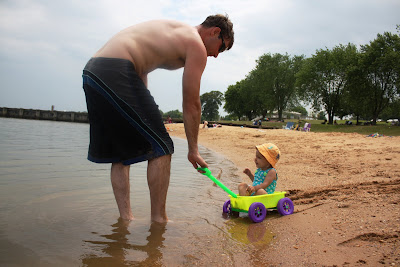 In food news, I'm making my first batch of chicken stock today.  I bought a yummy chicken from one of my favorite local farms on Tuesday and roasted it last night.  This morning I threw the carcass and some veggies in a pot with some water and simmered it for a couple of hours. It's finished now, but I'm leaving it on the stove because I have to go buy some cheese cloth when Hannah wakes up from her nap so that I can strain it...Then I can make chicken noodle soup from scratch! Go me! I have good timing too because Eric is sick again.  So sick that he even went to the doctor this morning instead of school.  Nobody in this family goes to the doctor much.  Other than my midwives, I don't even have a doctor. He's got pustules on his throat so they took a culture and sent it off to the labs but they don't think it's strep.  Apparently the sore throat is making his ear ache and screwing up his equilibrium so he keeps getting dizzy.  Weird.  I dosed him up with some garlic and honey and lemon green tea and also a bunch of vitamin supplements.  The doctors sent him home with lidocaine to gargle....Ewww.  I like my remedies better. Chicken noodle soup to the rescue!!!
Posted by terri at 2:09 PM