First Time For Everything: Honfest!!

These 4-day weekends that Eric has this quarter are really rocking my once responsible world.  I now have to cram all my "to do's" into 3 days because I lack motivation Friday through Monday. I don't know why his days off affect me. If anything you'd think I'd be more productive because he's around to help, but nope.  I can't get anything done when he's there.  Even if he's working on the house and not actually around; I still can't get anything done. Something about having Eric around makes it seem like fun time, and there's been a lot of fun time lately.  It's not just me who thinks so either; Eric has said "what a fun weekend" 38 times since we got back from the beach yesterday.  He said it while helping me clean up the kitchen and while brushing his teeth before bed, he said it first thing this morning before either of us was actually awake and then again while making his coffee.  Sometimes he just mumbles it to himself but other times he looks at me and smiles and then I smile and agree that it was indeed a fun weekend.

For him it was a good balance of work and play. He spent Friday and Sunday working on our fence and Saturday and Monday playing. For me it was life as usual mixed in with some fun activities and a few more naps than usual.  The napping thing is why it's been so long since I've blogged (or done anything remotely responsible for that matter).  Earlier last week we were all feeling a bit run down so I napped when Hannah did, and we all went to bed early a couple nights, and all that rest helped because nobody got sick! I was feeling better by the weekend, but two late nights (past 11:00!!) left me feeling as hungover as Eric in spite of the fact that I only drank 1/2 a pint glass of beer.  What can I say, I'm a cheap date these days.

Like I said, Eric worked all day on Friday so Hannah and I putzed around bored (it's weird how we keep ourselves entertained when he's at work, but when he's working on the house we just kinda mope around and wish he'd finish up and entertain us).  Laura must have read my bored little mind because she called on her way home to see if we wanted to take a walk.  She came over with Domino, and I threw Hannah and the backpack in her car, and we headed up the road to this nice trail that all the dogs love, and that Hannah therefore loves as well.  When we got to the bridge with the stream where all the dogs play, I took Hannah out of the backpack and let her play too.  She sunk her toes into the sandy dirt, leaned over, careful not to dip her butt in the water, and started splashing manically and happily until another dog came bounding out of the woods kicking up water everywhere, then she stood up and yanked on my leg. I did her bidding and picked her up so she could survey the new scene from above.

Saturday was Honfest which is always one of my favorite weekends to live in Hampden--who doesn't love a festival in their own neighborhood?  No fighting for parking, no desperate attempts to find shade, no holding your nose in the "turlits"; the freedom to walk back and forth and come and go as you please.  We loaded Hannah into the backpack when she woke up from her morning nap and walked down with Mary and her new baby, Adelaide, who were on their first trip out alone together since Adelaide's birth.

Honfest gets bigger every year, and I take fewer pictures every year. I guess because I've been to this festival so many times now and have lived in Hampden for so long (4 years!) that I'm getting immune to the novelty that is hon culture.  So there aren't a lot of festival pics, but I did take a kabillion pics of Hannah and Eric in all their backpack glory. Exciting, right? 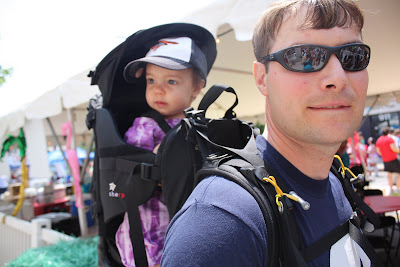 Hannah was intrigued by the giant pink thing. It had air being blown into it from below so it bobbed around all crazy.  See the gals all decked up in hon gear (leopard anything)?  They love the pink thing too. 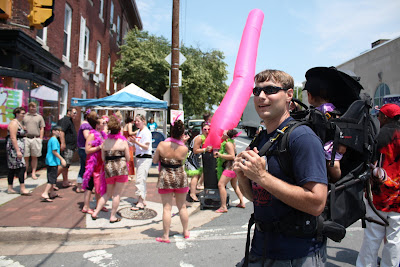 Mmmm....beer. I used to love walking around the streets with a beer. It always felt sneaky, even though it was legal, but this year, like last year, I abstained.  Just not as into it... 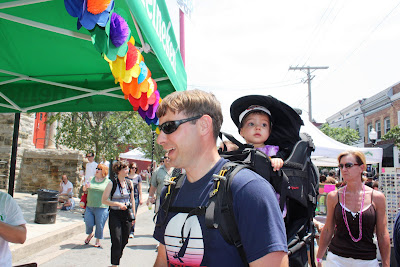 Hannah looks so intrigued in these photos, don't you think? She looks kinda perplexed. 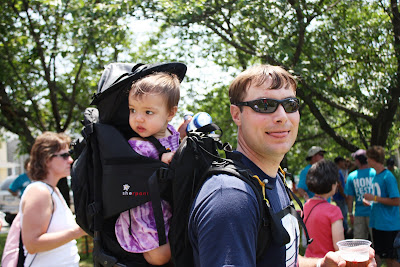 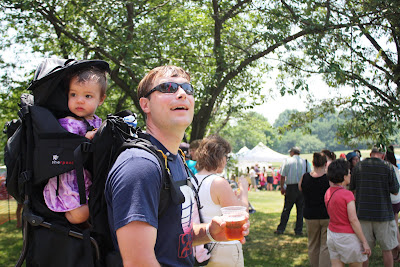 The falafel place is right behind Eric in this pic. I love that place. It is by far my absolute favorite food vendor in the whole world.  So yummy. 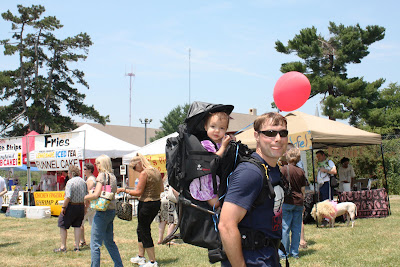 Not a great pic, but here's the outdoor "salon" of sorts where you can go to get all hon'd out.  You can sorta see the hairdresser teasing that girl's hair up into a beehive. I cringed looking at the mess of knots that was piling up on her head.  I don't know how she's going to get that undone without shaving her head. 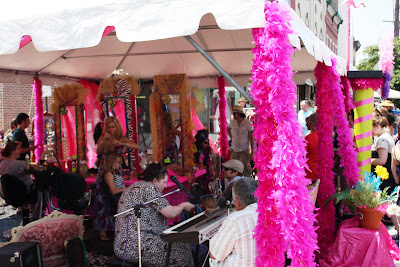 Mmmm....ice cream.  Hannah looks like she really wants a taste...Not yet kiddo!!! Pretty soon I'm gonna have to stop eating that stuff too if I expect to keep it away from her, but not on festival day. I saw the Taharka stand and scooped up a scoop of my favorite: honey graham. Yummmmmm! I love Taharka's ice cream.  Sooo good. 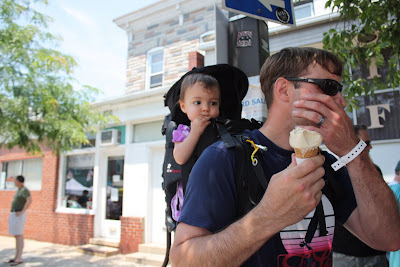 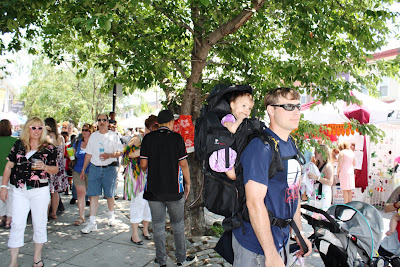 Eric's Navy friends and their families drove up that afternoon, arriving right after I laid Hannah down for her afternoon nap.  They spent the afternoon at the festival while me and Hannah snoozed....So nice.  When she woke up, I tied her up in the kitenge on my hip (the kitenge is a piece of fabric women in Africa use to carry their babies; Amy and Autumn brought it back for me) and headed around the corner to Brandy's.  We followed her and her roommates back down to the park and met up with a dear old pal of mine who I used to work with in Aberdeen.  When I realized how late it was (5:40!), I raced back to the house with Jenn and her  boyfriend in tow.

We walked into a happily frantic family scene.  Eric and his friends and all the kids were running around playing instruments (trumpet, didgeridoo, djembe drum, guitars....) and wreaking havoc.  There were two boys and two girls, all cute and really fun.  The boys are from San Diego and have never seen lightning bugs--can you imagine??  Fortunately, the back patio and alley way was full of the glowing little buggers.  The adult men struck up a jam session on the back porch (three guitarists and Eric on the drum and everybody singing) while the kids caught fireflies in carryout Chinese food containers.

Like I said, it was a really, really, really fun day.  I'll have to tell you about our beach trip later.
Posted by terri at 10:00 PM