We have a pretty major plumbing problem that has rendered the upstairs bathroom and laundry room unusable.  I mean, we could use it, but since the drain pipe is busted, using it means water pours into the wall....So we stopped using it.  On Saturday, I helped Eric demolish some very pretty walls that I feel like we JUST put up; the paint was still fresh.  We cut a hole in the bathroom wall, one in the kitchen ceiling, and took out the majority of the chimney that runs through the dining room. Totally sucks.  We've gotten two estimates so far, both saying it's gonna cost $1,000.  Not cool.  Anyway, fortunately for us, we have MC as a neighbor. She took Hannah for a walk on Saturday and got her out of the house for an hour so that I could help Eric.  He was pretty bummed about having to tear out walls he just put up so having me as company and clean up crew made it a bit easier I think.

Shortly after we finished sweeping up the plaster and drywall pieces, MC and Hannah returned, and shortly after that, Grammy showed up.  We had a nice visit.  I took the sequence of pics below before lunch.  Tonight Laura said something about how Hannah uses us as jungle gyms, and I couldn't agree more!! Hannah was using Grammy as a jungle gym on Saturday.  It makes holding her very difficult. 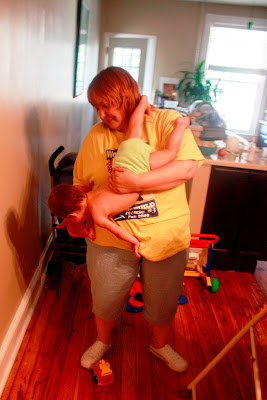 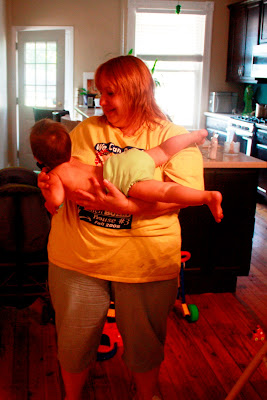 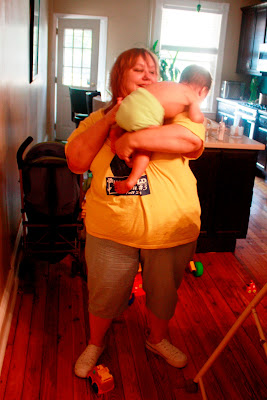 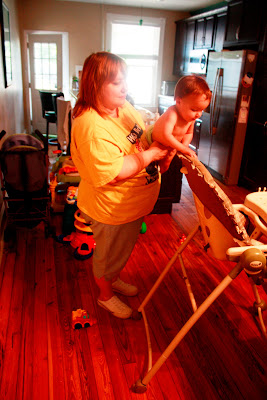 Look at those muscles!!! She's like She-ra.  (No clue why my mom looks like she's being possessed by something....) 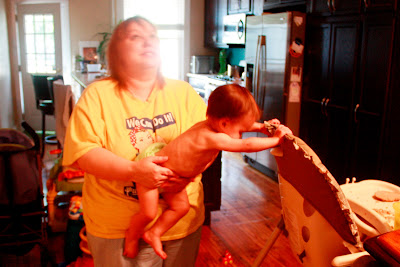 Email ThisBlogThis!Share to TwitterShare to FacebookShare to Pinterest
Labels: grandparents