The Diva and The Onion Skin

I've been lazy lately....I need to get on it and get some good pics of Hannah with her Uncle Joel before he leaves again! In the meantime, Laura took some pics on Sunday and posted them to her blog.  I stole a couple and reposted here. 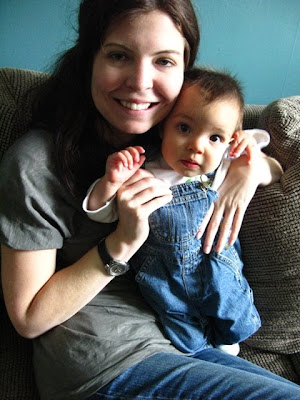 Hannah got a piece of onion skin stuck in her throat about an hour before the pic below was taken and was having a hard time coughing it up so feeding her was difficult because she just kept choking on everything.  It was terrible! Note to self: onions are not good play things in the grocery store (duh!!)...Since she was having a hard time eating with that onion skin in the way, Amy held her and managed to spoon in some avocado.  And Hannah coughed up the onion skin the next morning.  It was pretty big...not sure how she slept through the night with that thing there. 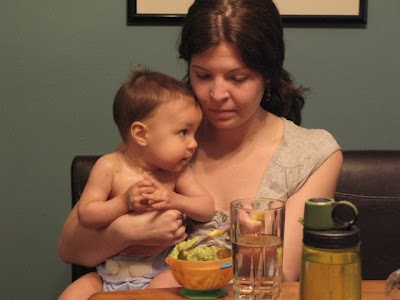 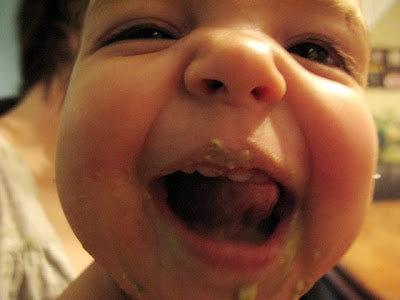 In the pic below Hannah is attempting to monkey her way from Amy's arms to mine while I transfer my first "light wheat" loaf of bread from the mixer to the bowl I use to let bread rise. I figure if Hannah is going to be housing bread, I should learn how to make something with more nutritional content than just white bread.  I know light wheat isn't that much more healthy, but it was the next step up in difficulty. Baby steps people. 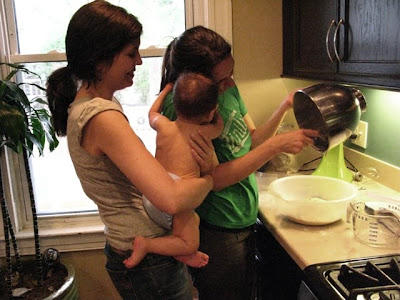 And now for the "in other news" segment (my suave way of transitioning topics): inspired by Libby, I ordered a Diva Cup from Amazon

and am trying it out for the first time today.  EARMUFFS: So far so good. It's a little awkward to get in and I'm a little worried about getting it out--my waxer said she had trouble with that part and therefore doesn't use it anymore--but I'm guessing I'll get the hang of it just like anything else.  And anyway, you only need to empty it twice a day so I won't have to deal with getting it in and out constantly.  Hello next step in 1) financial savings, and 2) less environmental waste.