Visitors From All Over

We've been busy enjoying visitors this week so my posting has gone from just a teeny bit too excessive to something closer to normal. I'm guessing there are no complaints about this return to normalcy especially for those who like to keep up, but don't have all dang day every day which is what's required when I'm feeling verbose and posting 12 times a day.

Last Thursday one of Eric's best friends from Michigan stopped by with his wife and two young children.  They had road tripped to South Carolina and stopped in Baltimore on their way back home.  I was amazed that they were traveling that far with kids ages 2-1/2 and 11 months...Can you imagine??? I couldn't. I stress about taking one kid to Trader Joe's which is only about 12 miles away.  I asked their secret to success thinking I could gain some tips to use for our upcoming road trip which we've pushed from May to August.  The answer: they drove through the night.  Unfortunately, that's not really a tip I can use.  There is no way in H-E-double-hockey-sticks that I'm driving through the night. No way, no how.  Yes, I've been known to pull the occasional, okay, okay, frequent, all nighter in my pre-Hannah life, but no matter how much fun I'd had while doing so, I almost always spent the next day wishing I hadn't.  At least then I could spend the day after on the couch in front of the TV watching cheesy movies and stupid stuff on MTV while napping and recovering.  Life sans baby allowed for such recoveries; life with baby does not and I am not a nice person when I don't sleep.

Maybe some of you are saying, "Easy, have Eric drive while you sleep."  Nope.  That won't work either.  I am a very, very light sleeper and am incapable of getting a good night's rest anywhere except my own bed.  Yes I realize how annoying that is, and before you attribute it to me getting old let me assure you that although I am quickly approaching the dirty thirty, I have ALWAYS been this way. Ask anyone.  Here's a specific example of something that happened all the time in high school (once I reached driving age and owned a car): I had gone to Shannon's house to spend the night with a couple of other girls. After staying up till nearly 4:00 a.m. talking and doing high school girl stuff, we all started getting ready for bed.  While changing into my pajamas I decided that really there was no reason for me to not just drive home and sleep in my own bed. I mean, what was I going to miss?  The fun part was over. So I drove home.  I was NEVER one of those laid back people who could just pass out on someone's couch or floor and sleep soundly.  So even if Eric opted to stay up all night and drive so I could sleep, it would be fitful interrupted sleep because I wouldn't be in a nice, comfy bed which would mean that we'd both be zombies next day and we can't be zombies the next day because we have a baby (see first point).

I'm pretty sure that Eric's friends are super human and if there were an award for being amazing enough to drive through the night and still be fun to be around the next day (which they were), I would give them that award.  But I don't ever expect to see that award reciprocated back to me.

Our next visitor was Amy who is in the states on vacation for 2 weeks--wahooooo!!! She took a couple of days to recover in Hagerstown and then drove up to snuggle her favorite psuedo-niece on Tuesday around lunch time.  She brought more presents from abroad for Hannah, but this time the presents are from the Middle East (they were from Africa last time). I forget exactly where she said she bought the lantern (shown below)....but I know I got a mirror from Jordan and I think that might be where Hannah's little mirror (not pictured yet) is from too. 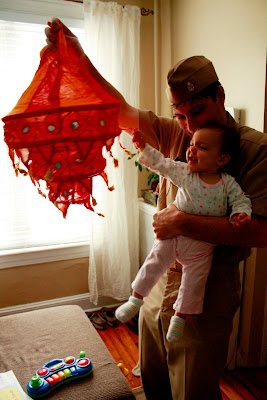 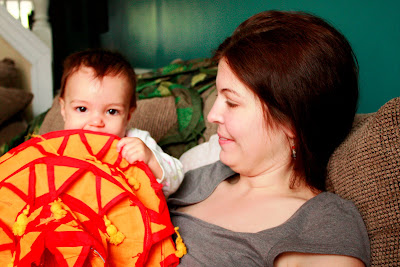 Amy left around lunchtime on Wednesday, and a few hours later we had a knock on the door from an unrecognizable man with a grizzly beard who was decked out in motorcycle gear from head to toe.  Eric opened the door and said "Can I help you?"  Joel's laugh at not being recognized by his own brother gave his identity away.  He rode his bike all the way from Seattle for a surprise visit!!  Hannah's a little unsure of the beard, but is otherwise happy to see her uncle.

They left a couple minutes ago to pull a permit for our deck which I think is going to end up getting started (maybe finished??) this weekend.  Joel said if it weren't for permits and inspectors and stuff, he could have that deck built in 2 days.  I'm getting REALLY excited!!! Our current deck is metal and rusted through in some spots with a couple of sizable (not to mention dangerous) holes.  Our new deck is supposed to cover the whole patio which will make it bigger than our living room! Wahooooo!!!  It'll be nice to have some where other than the front sidewalk to hang out with Hannah.

It's crazy that we've had all these visits from people we love a ton but rarely see because they live so far away!! I'm loving it.
Posted by terri at 1:50 PM