Why This Week Has Rocked

1.  Sleeping is easier than ever.  She seems to have settled into a pattern--FINALLY!  At nap time, I change her, close the blinds, turn on the fan, read her a story, lay her down, and leave.  She fusses for like 30 seconds and then she's quiet.  It's crazy. Bed time is crazier.  Ever since I started curbing her nursing to 12 minutes/boob, things have been smooooooooth sailing!  After I lay her down she fusses a little longer than nap time, but not much.  And get this, she actually let me rock her to sleep a couple times!!!! This is a first for her.  See, I would totally ignore the Sleep Lady's advice of laying her down awake but drowsy if rocking her would calm her and stop the crying, but it never has.  The only thing that ever stopped the screaming was taking her out of her room, preferably back downstairs to hang out and play.  On Saturday we were driving back from Home Depot and for some reason I was remembering bedtime with the boys I used to babysit and how that was my favorite time of day. When Sam was a baby, I held him, walking, swaying, and bouncing him around the room while singing No Woman No Cry.  If I moved to put him down before he was fully asleep, he cried so I'd keep going.  Although I sometimes grew tired (this could take up to an hour sometimes), I enjoyed it. I loved snuggling and holding him.  So I was thinking of that and for a second, I felt guilty that I don't do that with Hannah but then it occurred to me that, I totally WOULD do that with Hannah. I would have done that instinctively, but she wouldn't have it.  She just screamed and screamed and screamed and bucked herself away from me, always clawing her way out of my arms and toward the door.

But that very same night, Saturday night, she stayed in my arms drowsy but awake and scooted herself sideways so that her head was in the crook of my arm and she laid there peacefully while I swayed with her and softly sang No Woman No Cry. After about 10 minutes, she reached for her crib so I laid her down and tip-toed out.  All was quiet and perfect.  It was the best bedtime ever! 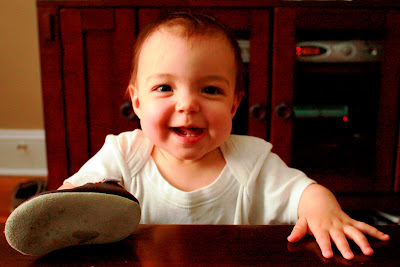 2.  This is a big one:  Hannah communicated with me today and I caught it!  I was feeding her lunch and she grabbed the spoon out of my hand.  Then she got this ornery glint in her eye and flashed her toothy grin and held the spoon out toward me.  I don't know why I thought she was trying to tell me something, I guess it was the look on her face or something, but I paused for a minute and then had a eureka and it was right on. Sometimes when I'm wiping her face, she grabs the rag and I get silly and say "gimme that" while tugging playfully on the rag it.  I don't play that game often because it occurred to me that it might teach her bad a habit of swiping things rudely from other kids.  Anyway, I deduced that that's what she was wanting so I reached out and tugged the spoon playfully and said "gimme that!" and she started cracking up laughing! I swear that's exactly what she wanted.  It was such a cool moment. 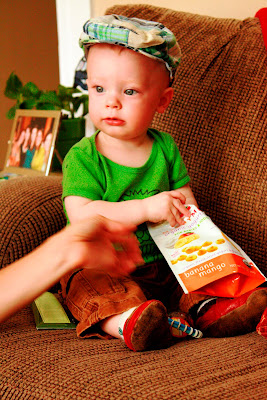 3.  Asa and Hannah went on a date yesterday (with Libby and I as chaperons).  I forgot my camera at lunch but took the above pic of Asa when we got back home). Libby got a side of Goldenwest Cafe's delicious sweet potato fries and shared some with the babies. I tried to give Hannah sweet potato fries when we took her to Miss Shirley's for lunch about a month ago but she wasn't interested.  This time though, she grabbed those fries in her fist and started chowing down.  It was really cool!!! I missed dinner last night because I had an appointment with my trainer, but I asked Eric to put some steamed peas and carrots on her tray for her to feed herself in addition to pureeing them to spoon feed her.  She was still gnawing on a carrot she'd been hoarding in her fist when I got home.  I love it! 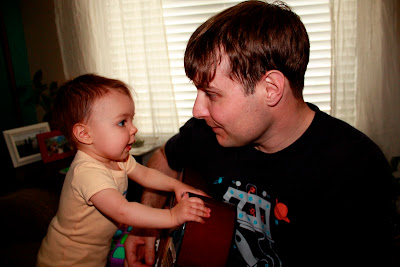 4. In general, she has been incredibly happy all week, smiling her huge toothy grin with nose scrunched up almost constantly.  I am loving being around her and dreading having to leave her all day on Friday.
Posted by terri at 8:32 PM