Posts I Keep Starting In My Head

I keep starting posts in my head but then never sitting down to write them.  Yesterday's went like this:

"Let the record show that on this rainy Monday in late April, I cleaned the entire house, including the hardwood floors on the first floor."

That's a lie though because I didn't really clean the entire house, but I did clean the entire first floor, and, more importantly, I cleaned the floors; that part is not a lie.  I actually mopped the floors, and they look amazing as a result, and yes I am deriving great pleasure in this small menial task. So much pleasure in fact that it kinda makes me want to be one of those neat freak moms who wipes the kids face after every bite and refuses to let her hold the spoon lest she fling it onto the nice, clean floor and splatter beets everywhere...again. But I am proud to say that although I now cringe when the spoon hits the floor, I am still letting Hannah have her fun.  I have decided to do a much more thorough clean up after each meal though. Where I used to let the beets lay where they fell, I am, for the time being anyway, wiping them up AND sweeping the copious amounts of bread crumbs that fall by the wayside during EVERY dang meal.  I'm clinging to that "just been cleaned" feeling for as long as possible because once it goes, well, that's when I let it all go and the beets start becoming part of the natural floor pattern....

"For some reason I thought it would be fun to teach Hannah to crawl up stairs, but now that she can do so by herself, I'm thinking this was not such a bright idea."

Not much to say about that except that she is shaping up to be quite the climber, and we will most likely have to start thinking about baby proofing the house soon.  That or watch her like a hawk. On that note, I just came across the funniest post from Backpacking Dad.  Love it!

"Finally a food that competes with bread: lasagna."

We made a big pan of lasagna on Sunday and have been eating the leftovers as often as possible since then. Yesterday we were starving by 4:00 so we had an early dinner (a "supper" I suppose is what you call it when you eat with the early birds).  We put Hannah in her chair with some bread and sat down next to her with our lasagna.  Since I am hoping beyond all hope that she is not a picky eater (my BIGGEST PET PEEVE), and since she is old enough now that she can eat most foods, I put a little lasagna on my fork (yes, I said FORK) and gave it to Hannah who licked the fork tentatively before gobbling it down.  She spent the rest of the time going "ehhhhh, ehhhh!!!" and reaching in the direction of my plate, so I kept feeding her.  She'll be taking after her daddy if lasagna is her favorite meal.

We had a playdate with Asa and Libby this morning! Since both the babies were napping when she got there at 10:30 (hers in the car), we sat on the stoop and indulged in some girl talk until the babes woke up.  Once they were both up, I was like the paparazzi with the camera--I don't know what's wrong with me but sometimes I just can't put the thing down, and other times I'm too lazy to even locate its whereabouts. Sigh.

They sat next to each other really cute-ly for like 5 seconds before Hannah took off in a blur. 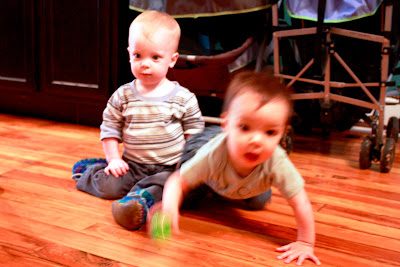 Asa was really funny in the Jeep because he can walk so he just sorta stood up in the thing and walked, dragging the Jeep along with him.  Handsome, ain't he? 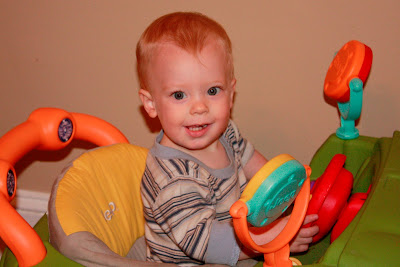 Notice the fabulously clean floor beneath this ornery little bitty? Please do. I am now seeking praise and frequent head patting for things like cleaning the floor. 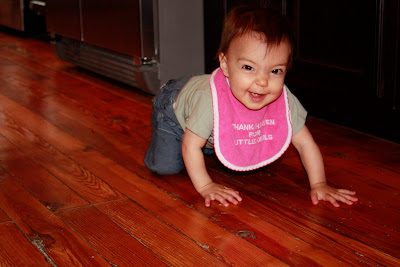 After lunch, we tossed the kiddies into their respective strollers and headed off to the park. 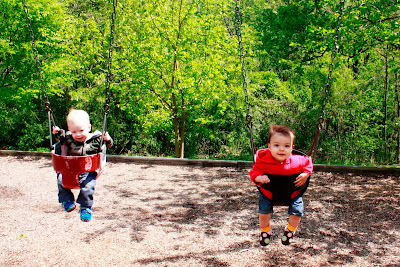 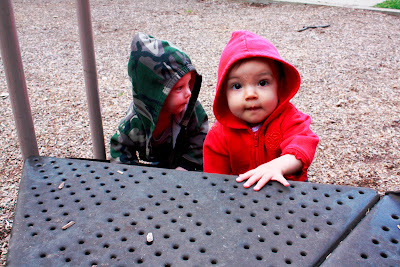 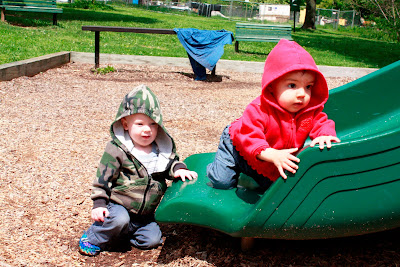 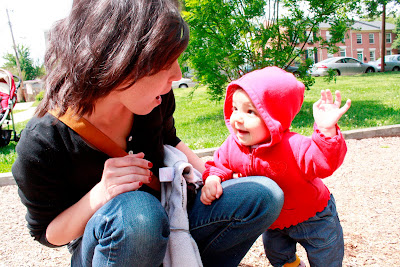 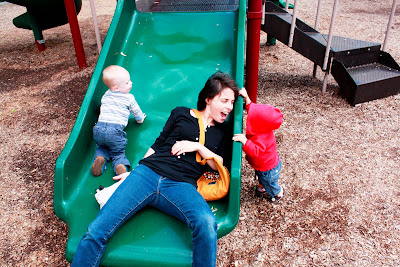 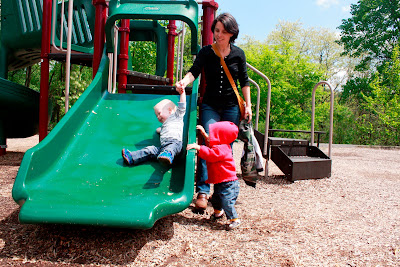 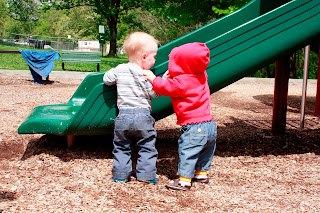 They are so cute. I love it!  And at the end of the visit, Asa hugged Hannah and Hannah patted him on the back.
Posted by terri at 4:15 PM