Hannah and I braved some chilly and wet weather to play with our friends Erin, Brody, and Addison at the playground today.  Addison was born in December of '09 so she's not much younger than Hannah. I think the two of them are going to play together super cutely in the next couple of months! In the meantime, Hannah had fun following Brody around the playground and giggling at all his crazy almost-3-year-old antics.

On the way to the car, Brody offered his seat in the sit-and-ride stroller to Hannah (so chivalrous!).  She happily climbed right up behind Addison and started girl talking and giving her friend the occasional pat on the head (as seen below). 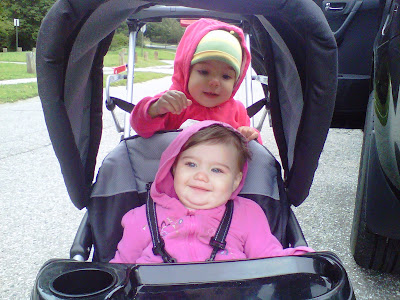 Email ThisBlogThis!Share to TwitterShare to FacebookShare to Pinterest
Labels: friends