Hannah gets her wings at the Renn Fest

We made it to the Renaissance Festival this year, yay! Hannah was only 1 the last time we went, and life was very different then, although we ended up carrying her the majority of the time this year as well, so maybe things weren't that different after all.

This year Eric was bummed that we didn't have costumes. I'm not really into dressing up (or wearing anything other than yoga pants and sports bras) so I mostly just ignored him, but I did indulge his efforts to live vicariously through Hannah. We went dutch on everything that day and took turns buying her fun stuff. By the end of the day, she had wings, a flower headdress, a wand, and a wooden sword. Spoiled much? 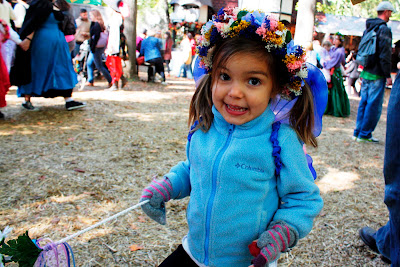 We either picked a crazy busy day to go or a crazy busy time of day because the crowds were insane. It took me forever to get my bearings, and the lines were insane, and we mostly carried Hannah because the alternative was that she be trampled. In spite of the lines, we did manage to hit up the slide, go crazy in the maze, ride a pony, and eat a turkey leg. The maze was her favorite by a long shot. She ran through faster than either Eric or I could keep up with, giggling maniacally with a far longer attention span that either Eric or me. It's crazy how much she loves running wildly through a maze! I wish we had a yard and space to build our own maze--imagine how much exercise she would get and how well she'd sleep at night! 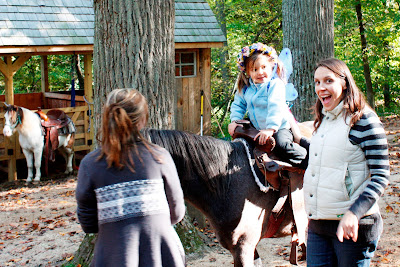 And that's it. Pregnant Terri is not turning out to be much of a mamarazzi. The bright side to that is that I'm finding it easier to catch up on posts!
Posted by terri at 8:43 PM