It's Always a Festival, Isn't It?

On Saturday afternoon Joel helped me in the kitchen (by taking on the making and baking of this zucchini bread) while Hannah napped and Eric headed off to play football.  When we had the kitchen clean and the baby awake, we hopped in the car and drove south with the intention of catching the tail end of Eric's game and then kidnapping him to walk around Federal Hill for a bit, but we only made it as far as Mount Vernon because that's when we got stuck in Book Festival traffic and decided to park rather than be patient.


The kid's area also had a number of activity booths including this one with crayons. Hannah LOVES little chairs and stools and tables so when we walked by this one, she beelined for the stool, sat herself down, and started coloring on the closest piece of paper. 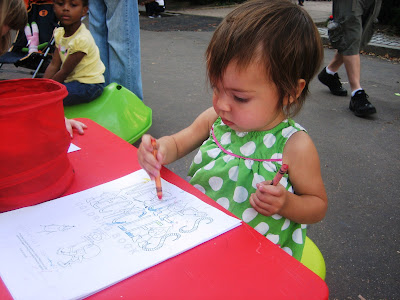 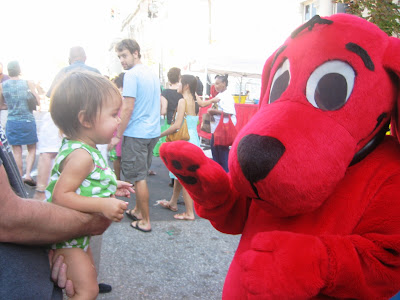 On Sunday after the nap she chose not to take despite being in her crib for over an hour, we drove south again, but this time we exited city limits and made our way to the Renaissance Festival. I sat in the back with Hannah and snapped this picture of her after she had stuffed her cheeks full of every last frozen blueberry in the little to-go container and smeared the remains all over her face. 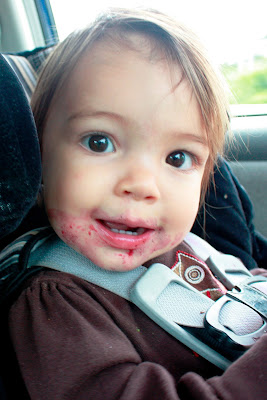 These bells were tied on a string that was tied to two trees...We jingled them a bit. 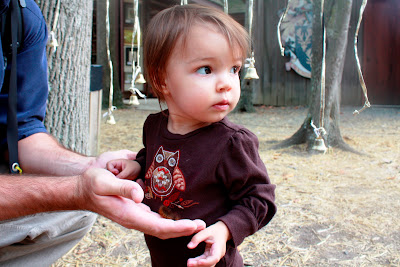 So, I had it in my head that I was going to climb the "expert route" at the Renn Fest this year and win the $20 prize.  I had a friend who'd brought her climbing shoes a couple years ago and was allowed to use them, so I brought mine. The last time I'd tried the expert route, I was barefoot. I also wasn't as strong as I am now, so I was pretty cocky going in and had cleared a space in my wallet for my free 20 dollar bill that I was certain would be there before the end of the day. However, this year they didn't allow climbing shoes. They would have allowed Vibrams, but I didn't bring my Vibrams, so I had to go it barefoot again. My confidence waned significantly. I suggested Joel go first so I could watch and get his beta when done. 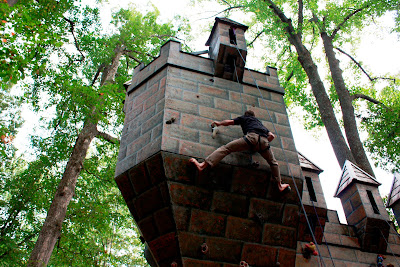 Joel came down and graciously accepted his $20, and I started to panic. After watching him and reading the route, I knew I couldn't do it. Maybe with a proper warm up and shoes, but not cold and barefoot.  But there was no turning back so I took off my Chacos, tied in, chalked up, and started up the wall. 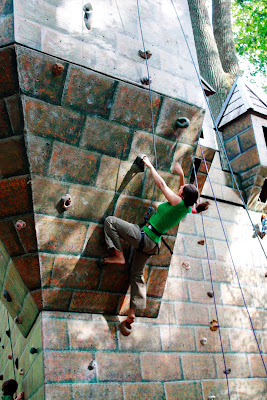 No dice. I got stuck in this spot right here, unable to grab that loopy hold with my right hand no matter how many times I tried to lock off and lunge.  Sigh.  Next year I'm bringing my Vibrams AND my guns (as in tickets to the gun show, not the dangerous metal objects), and I am coming home with $20!

After my failure, I suggested we go see the elephants, and I contemplated spending the rest of my money on an elephant ride for me and Hannah, but decided to just stand there at the wooden fence and stare at them from ground level instead. Hannah was content to do so, even though most of the time you could only see their tail end from where we stood. 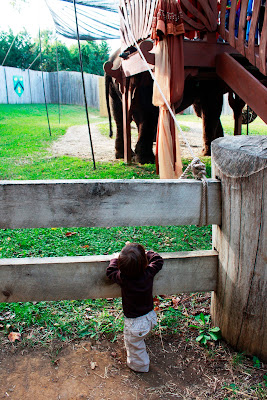 I was supposed to be taking the BODYPUMP instructor certification training this weekend, but I waited too long to sign up and then ran into technical difficulties when I did and after a bunch of back and forth with the reps from Les Mills, I missed the deadline for sign up and then had to go through even more back and forth in an attempt to get into the class.  I started emailing them the same day that registration closed to see if I could still get in which was a week before training started but they didn't get back to me until the day before training to tell me I was in. By then I'd just given up and wasn't ready for it at all so I spent the afternoon stressing out about whether or not I wanted to spend the rest of the day stressfully trying to pull everything together so I could go. Joel, worried that I'd regret not doing it, tried to convince me to go and suggested I think of it as a weekend away, some much needed "me" time that included exercise.  That got me thinking..."Me" time, huh?? Welllll, although I really like BODYPUMP and definitely want to become a fitness instructor, if I'm going to get a weekend away and some ME time, I can think of other ways I'd like to spend it.  So I decided that when Hannah weans, me and my mom (and maybe my aunt and cousin too) are going to take a girl trip to a spa. I'm going to totally wipe this plate clean, and then I'll think about heaping something else onto it.  Bad metaphor, I know, but it's all I've got.

Right when I was thinking that, Eric called to ask if I wanted to go to the Khaki Ball (a Navy event for the Chiefs) the next night because he was standing in front of the dude selling tickets at that very moment.  I explained that I was still trying to decide whether or not to do the training and that if I did, I wouldn't be able to go to the ball, and he got annoyed with all my wishy-washing and politely suggested I skip the training and go to the ball.  So I did.

We had to be in our seats by 7:00 which meant leaving the house a little after 6:00 which meant not nursing Hannah and putting her to bed.  AHHHH!!!!  It would have been the same thing if I'd done the training (training was 12-9 on Friday) so I decided to go with it, let Joel put her to bed and just see how it goes. I'd pumped plenty of milk and since Joel had been with us for the past two weeks and had changed her diapers, bathed her, and put her down for a nap, I figured if anyone was going to do it successfully, it'd probably be him.  And he did.  She wouldn't take either a bottle or a sippy cup (just kept slapping them away), and she wouldn't let him read her a story (slapped the books away too).  She wouldn't even let him turn on the constellation ladybug, but she went to sleep, and she did it before 8:00 too. Totally miraculous.  And also a bit liberating.....
Posted by terri at 9:37 PM