Now It's a Virus

After the development of a couple more symptoms including extreme and unprecedented crying/shrieking and a splotchy rash on her belly and back, we seem to finally have an answer as to what's going on: a stomach virus.

Hannah woke up at like 2:30 a.m. on Monday night/Tuesday morning so I changed her diaper (she's been pooping at night ever since this diarrhea came about) and put her back to bed with not a lot of fussing, but then she woke up again at 4:00ish and could not be calmed.  I comforted her at first, then left her to cry thinking she'd grow tired after 5 or 10 minutes like she usually does, but she didn't. She just got louder and louder.  Eric went from 5:00-5:30, and when it was clear that that wasn't helping, I went in and laid down with her.  She passed out on the boob until about 6:20 then sat straight up and started screaming again. It was really weird, worrisome, and also a little annoying because by this point, fatigue was really starting to set in and I don't do well without sleep.   At breakfast Joel pointed out the little red dots on her belly and asked what they were. There were little raised pimpley-looking things all over her belly, and her back was red and splotchy like an ink blot. I had dropped off her stool sample the day before so I was a bit hesitant to call the doc thinking I'd have my answer in a couple more days and in the meantime they'd probably tell me nothing helpful ("Make sure she's staying hydrated....Give her Tylenol...Blah, blah, blah, and duh).  But then she woke up from her morning nap screaming that crazy scream again.  Again I laid down with her to nurse her and after about 20 minutes of snoozing and nursing, she sat straight up AGAIN and started screaming like she was in pain while big tears rolled down her face.
So I called the pediatrician. I was like, "Look, I'm not a hypochondriac, I never once called in with a medical concern for the whole first year of Hannah's life, and in general, I operate under the belief that 'everything's gonna be all right,' but I'm telling you, there is something wrong with my child." I took her in to see the nurse practitioner and told her she's had diarrhea for weeks, had a fever this weekend, and is now screaming randomly as if in pain. She's also still listless and clingy at times (TOTALLY unlike Hannah). I'd temporarily forgotten about the rash but no worries because the nurse's first question was "Is there a rash?" She looked at it and said it was a virile rash and not to worry because the rash meant the end of the infection.  She said she's performed countless stool samples this summer on kids with this stomach virus that usually starts with a fever then turns into a month of diarrhea. It's weird that we got the fever toward the end, but it's otherwise normal. There is no treatment, just Tylenol to make her comfortable if she seems very uncomfortable.
My guess is that although the vaccines didn't cause it, they probably lowered her immune system while her system worked on fighting them off and then made her susceptible to this other virus. Where she picked up the virus is beyond me, maybe the daycare at the gym??  Anyway, it's nice to have a reason, but I'll feel a lot better when she feels better.  She's got big bags under her eyes, and her complexion is all paleish/greenish--she just LOOKS sick. It's terrible. I hate it.  I tried to take a picture of her looking all sickly, but the camera made her look normal, hid the bags AND the rash and the discoloration. I wish it would do that good of a clean up job when I'm the one in the frame. 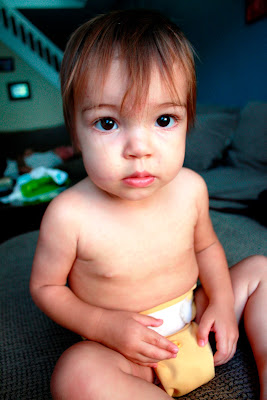 We got a little antsy this afternoon after our mid morning nap (we are temporarily off schedule and just laying her down whenever we think she needs to sleep--oh, and I say "our" because Hannah and I were up from 3:00-4:30 last night and then Eric's alarm went off at 5:00 so I napped when she did today) and took what ended up being a looooooong walk around the neighborhood. We scooted west first to Roosevelt Park to show Joel the pool and the skate park and all the renovations being done, then we ambled through the streets on the other side of that park since Eric had never been over there, then we walked along Falls Road and I remembered this cool, hidden little patio deck thing that overlooked the Jones Falls so that became our destination. A sign that I don't remember being there the last time I visited many years ago said that it was the James Rouse Memorial something-or-another at Round Falls.  It's no state park or anything and is not nearly as nice as it looks in the pictures, but, well, it's kind of like finding a dollar in the gutter: you don't expect it to be there and it's not enough to really write home about (or blog about....) but it's still a good find. 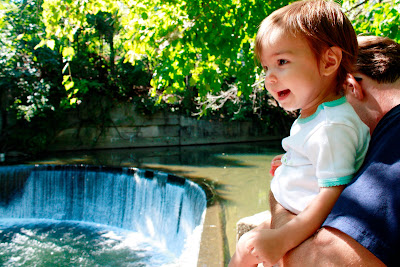 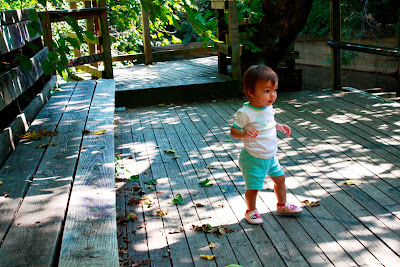