Hampdenfest kicked off this year with toilet bowl races, and it was pretty awesome.  So, it's set up like box car racing, but the chariot had to have a toilet bowl on it.  Check it out: 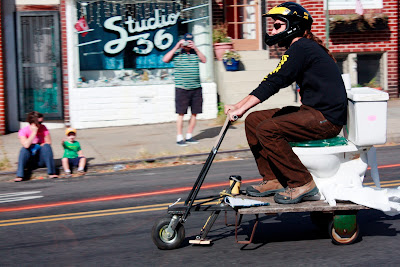 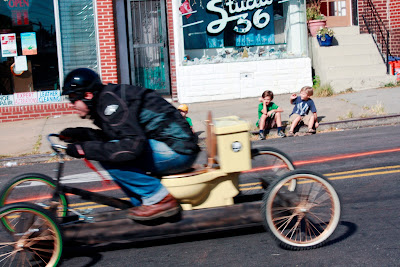 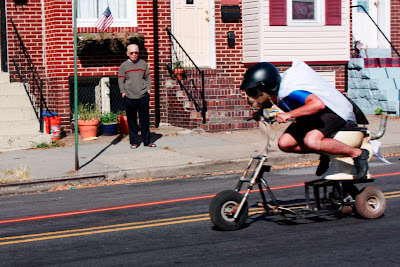 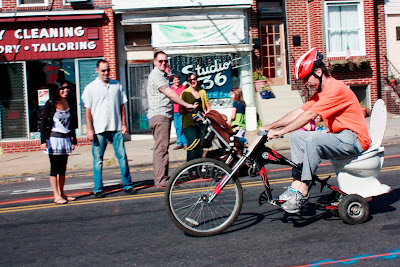 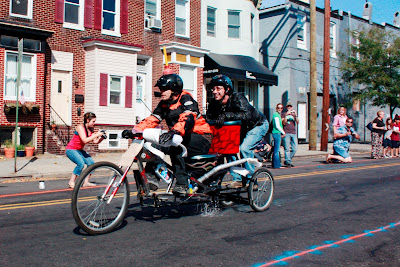 Uncle Joel managed to get off the boat and after 12 hours and three flights, made it to Baltimore.  Woohoooo!!! Unfortunately, he's only here because of migraines, so that sucks, but still, we love having him. 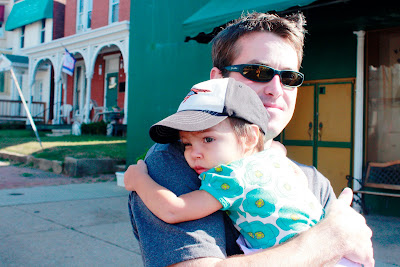 Hannah woke up with her very first fever on Saturday morning so she spent lots of time snuggling.  We had a hard time getting an accurate read on her temperature no matter where we took it (forehead, armpit, mouth, rectum), but it seemed to fluctuate between 100 and 102.  I did some research and decided to let the fever play itself out as long as it didn't get above 102 or last more than 2 days.  I nursed her on demand and allowed her to nap on the boob as much as she wanted thinking that rest and fluids, especially mama milk, were her best bets to recovery.  By last night she was still really hot to the touch, and I was getting worried so I laid her down in a cool bath and trickled water over her for as long as she could handle it.  Fortunately, she was much better this morning.  She still has the diarrhea that she got soon after her 1-year vaccines so I took a stool sample in to the pediatrician today...She's been a mess since those vaccines, from the blistery sores to the yeast (that's what the second rash turned out to be) to the diarrhea to the fever...I know, I know, it's a coincidence, right?  I'm sure it is, but it's hard not to wonder if it's all related...Hannah got through the first 12-1/2 years of her life with 0 diaper rashes and 0 sicknesses (though she did have that 1 case of yeast), then she gets her first live vaccines and we've got issue after issue after issue...Am I being paranoid???
Posted by terri at 9:08 PM