Fun days at Montessori: Grandfriend's Day and the Halloween party

Friday was Grandfriend's Day at Montessori. My mom drove down the day before and her and I went to see Wicked (awesome!), then she accompanied Hannah to school the next day and shared some photos and stories with me so I could share them here.

Hannah brings home at least one new painting every day, and during the parent/teacher conference, Hannah's teacher let me know that Hannah spends a lot of time at the easel each day. Apparently she has also mastered the art of double-handed painting, as captured by Grammy. 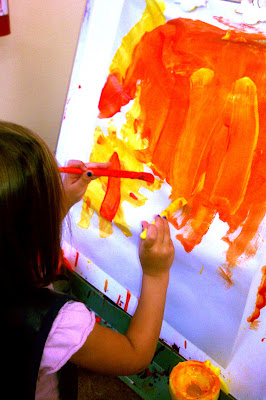 In lieu of this information, I picked up an easel for Hannah at IKEA on Friday afternoon. Since she decided to play in the kids room there for the first time ever and didn't see me pick it up, I decided to make it a Christmas present. That's right, I've started my Christmas shopping. Feeling good about that! I have no clue where we'll put the easel after giving it to her...the house is pretty full already.

The grandfriends spent a little over an hour in the classroom with the kids then they moved to the auditorium. The kids filed in shortly after and sang some songs they had rehearsed. My mom didn't tell me what songs they sang, but the night before when I asked Hannah what she was going to sing, she started singing "You Are My Sunshine." It was very cute. I wish I'd heard the performance!

Hannah is the one waving excitedly in the photo before. 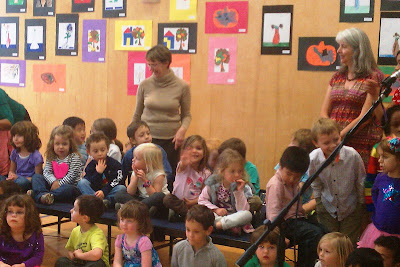 That afternoon we headed to the mall. This is not something I do on my own, but it is a thing I have always done with my mom, though increasingly less frequently since becoming a parent. She wanted to go to IKEA, and she also wanted to get Hannah's picture taken since she had a coupon from when she took Clay and Mason to get their's taken. I'm not a big fan of those in-mall photo studios, in fact, I think they suck. But I wasn't paying so I humored my mom.

Before that we mosied into the Disney store and Hannah went straight for Merida's bow and arrow set. I cannot tell you how proud I was that in a store chock to the brim with princess crap, she picked up the bow and arrow. I happily bought it for her, and then Grammy bought her a Merida doll that she didn't ask for but that she is quite enamored with. 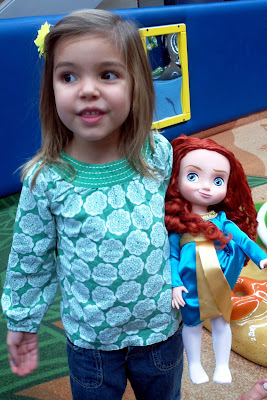 The bow and arrow and the doll sealed the deal on her Halloween costume for the Halloween party at her school the following day. I'd bought her the Merida dress a couple months ago, and since I had to go to Target for cat food that morning, I picked up the wig while there, and voila! A mini Merida (albeit with strange 80s bangs) is born. 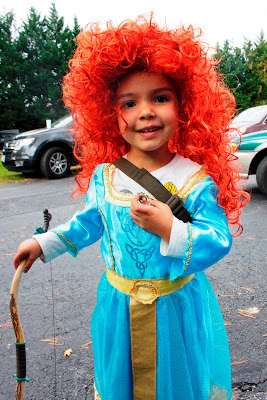 Of course there were tons of Merida's there, after all, she is this year's Disney princess, and although I would have loved to have been more creative, I am just thrilled that the princess she loves is the ONLY one who isn't rescued by some prince and living married and happily ever after by movie end. Even Tiana, who is a pretty cool princess with great work ethic, still needs the prince to round her out and teach her how to have fun. Merida learns her lessons on her own, with a little help from her mother, and at the end, she climbs a giant rock and stands on top as if she's standing on top of the world. This is a princess I can get behind.

Our first Montessori Halloween party was a lot of fun. Hannah bounced in the bounce house, played on the playground, decorated a pumpkin, and hung out with her friends.

We volunteered for the clean up shift at the bean bag toss and while I was doing that, Hannah climbed her own rock and looked out across the land triumphantly. 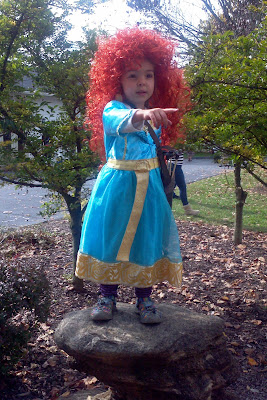 I haven't yet decided on whether or not we'll be trick-or-treating in the neighborhood (regardless, of whether or not we collect the candy, we will definitely not be eating it), but either way, we'll definitely get dressed up and walk around to scope out the really cool and original costumes. Due to the insane weather, the Hampden trick-or-treating and costume contest has been pushed back to Saturday, which is great since it means Eric can come with us!  Hannah has a box full of costumes and dress-up material so whether or not she chooses to be Merida again remains to be seen....