Hanging out in Hagerstown

School must have made Hannah feel pretty independent because on the night of her second day, after I had read her two books and turned out her light, she casually mentioned that it had been a while since she'd spent the night at Grammy's. I agreed and asked her if she'd like to do that again soon, and she launched into a full-on tale of what happens at Grammy's (or what happened the one time that she had stayed there). Most importantly, since the bedrooms are on the first floor, Hannah is allowed to watch TV after her bath. This is a huge pro for Hannah who had been requesting TV after her bath earlier that evening. I suppose my answer of "no" is what spurred this desire to go to Grammy's more so than a newfound feeling of independence.  She also mentioned hanging out with Winnie (my mom's miniature chihuahua), going shopping for toys, and playing with the toys at Grammy's house. Then she said that Grammy's bath toy selection is lacking. Hannah decided she would have to bring her own next time.

Since we were planning a trip back for that Saturday to spend time with my dad whose birthday was earlier that week, I called Grammy to see if she wanted an overnight house guest, and of course, she did.

That morning Hannah attempted to shove all the toys on her shelves into her backpack and finally settled on just bringing a car, Lila, and all of Lila's accessories. Then she put on her backpack and gave Lila a shoulder ride to the car. Ready for a slumber party! 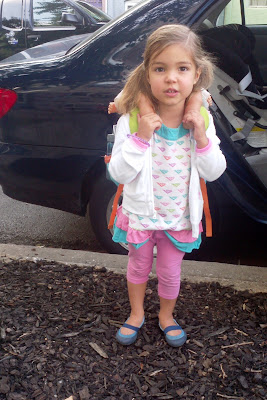 We drove to Uncle Chip's that morning and spent the day wrestling, swinging on the tire swing, riding bikes, climbing trees, and just hanging out. I was feeling lazy so I didn't take too many pics, and most of the ones I did take are blurry because of my anti-flash ways/poor photography skills...but I'm not going to let the fact that the pics are bad stop me from posting a few.

Chip and Clay wrestle a lot, but it's not something Hannah does so watching her was hysterical. She jumped in at first just because Uncle Chip had Clay pinned and she wanted to rescue her cousin. Clay returned the favor when Chip pinned Hannah, and then the two took turns rescuing each other. 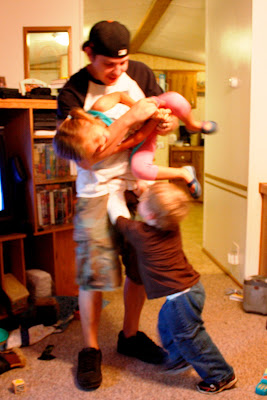 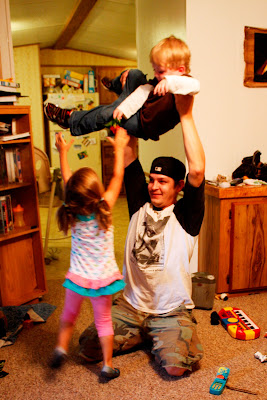 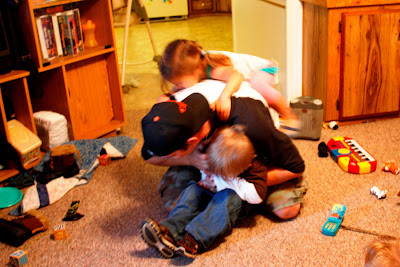 My dad and Sondra came over after lunch, and Pappy and the kids wrestled in the yard. Wrestling was one of mine and Chip's favorite thing to do with our dad when we were growing up so it was fun watching Hannah get put in the scissor hold, a hold in which I spent much of my childhood. 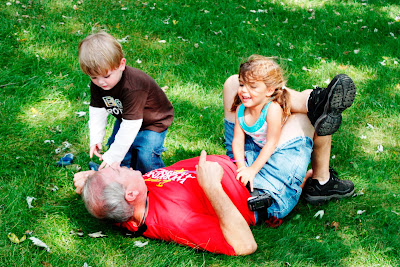 Hannah was also obsessed with setting up a pretend camp fire pretty far from the actual fire pit. We played there in the morning, and then she dragged Sondra over there in the afternoon, and eventually, she dragged over the rest of us as well to join in the pretend game of weenie and marshmallow roasting (and eating). 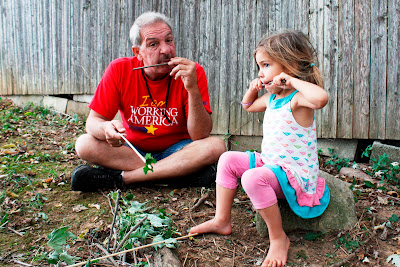 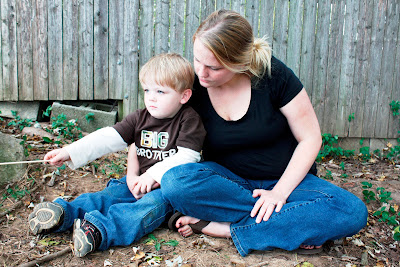 Hannah needed quiet time at about the same time that Mason did so she hung out inside watching the TV with Uncle Chip. 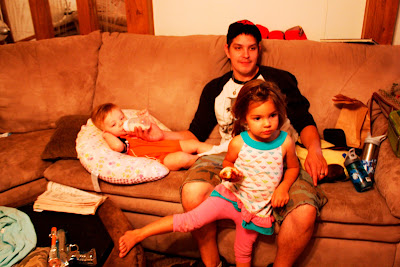 I had my mom up Hannah at Chip's, that way she was leaving me rather than me leaving her. She hopped right into Grammy's car and left me standing there feeling a little forlorn. I drove back to Baltimore alone feeling like I was missing a limb. The first time she stayed with my mom, Eric and I went out in Hagerstown and then stayed with a friend so we didn't have too much of an opportunity to miss h er. This is the first time that we've ever been in the house without Hannah overnight, and it was weird! We enjoyed it though. I was coming down with cold (probably as a result of Hannah being sick earlier in the week) so we took advantage of the opportunity to lay around the couch and watch what we wanted on TV. It'd have been nice to have done something cooler like go on a date, but we were both exhausted so we ordered in sushi, watched Snow White and the Huntsman, and  went to bed early.

The next day was the worst day of my cold so we skipped the farmer's market and yoga and just laid on the couch some more...so lazy. I don't feel guilty though--the one thing I miss about the pre-parenthood life is the ability to just veg out on the couch for unhealthy periods of time when feeling under the weather so it was nice to be able to do that.

Hannah came home after lunch with a bunch of loot. Grammy had taken her shopping and she picked out an outfit, a soft robe, heart-shaped glasses, and a talking baby pony. She is such a sucker for any toy that is a baby and especially one that makes noise/moves/has a bottle it can suck on. (Other obnoxious baby toys that she has include the FurReal baby kitty and chipmunk.) I don't love these toys and always try to talk into her something else, but I do love that she has a huge mothering instinct and am happy to allow her to fulfill that.

Here she is in her snuggly new robe. I should note that the little diva did not approve of this photo and insisted I take a few more until I took one she was happy with. I like this one though. 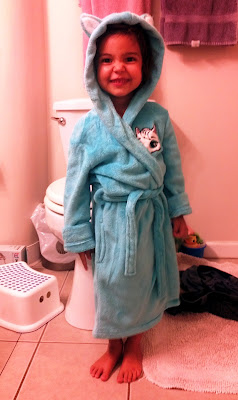 Eric and I enjoyed the break, especially since we get so few, but we were really happy to have her back. The house is so quiet and empty without her!