Grammy failed me last weekend--she didn't take a single pic of Hannah during her very first solo sleepover!! I suppose if I had made a request ahead of time, she probably would have...

I've got to make a dent in The Awakening so I'm going to sum this up as quickly as possible. A friend of mine and Amy's from high school bought and totally renovated one of the area's bars, The Broad Axe. It re-opened recently, and since last weekend was Blues Fest, his band was scheduled to play with a few other Blues Fest musicians at the after hours party they hosted at the bar. I haven't seen the Back Roads Band play since sometime in college (when my presence at their shows was pretty regular), and I haven't been out after hours in Hagerstown since before Hannah was born.

I was hesitant to go since this was the weekend before my class, but Eric was gung ho and Amy was pretty persistent as well. Eric was already planning to take Hannah to Hagerstown for the day to deliver our old washing machine to my mom and to give me some time to work on my class. Prior to coming up with this plan, my mom had offered to keep Hannah overnight and bring her back the next day. (She offers this a lot but I have never taken her up on it.) After some hemming and hawing, I asked Hannah if she'd like to stay the night with Grammy on her own, and she loved the idea so I decided to get over it and let it happen.

I spent the day alone in Baltimore prepping for class, and Amy came to pick me up late that afternoon. We met up with Eric at my dad's house where we staged a psuedo-prom photo shoot. Lame, I know, but I can count the number of times that I've been done up since Hannah was born on one hand, and I needed a new Facebook profile pic. Since the automatic focus on our camera is broken, and since seeing clearly through it is obviously difficult, not many of the pics turned out. Here are two: 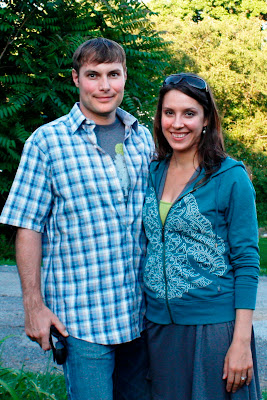 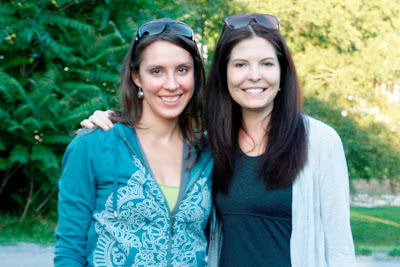 We had a very fun, very late night, and I was exhausted the next day, though fortunately not hung over since I stopped drinking early on after three beers. Eric, on the other hand, took two days to recover from his fun. He is more dedicated to living in the moment than I am.

As for Hannah, apparently she did well. Since I wasn't there, I'm going to copy in my mom's post that she put on our family blog:

Saturday was my first overnighter with Hannah.  It went very well.  No crying.  No missing parents.  No tantrums.  But I've realized that Hannah sometimes acts older than I do.

This isn't bad.  She's mature in the precocious way that some kids get.  But I couldn't get her excited about going to the park or much of anything else.  When I asked if she wanted to play a game she'd say, "Um, okay."

The most excited I saw her is when Ming Ming (Wonder Pets) had a hammock made to look like a spider web.  She thought this was hilarious!

We walked through the toy store, cooked, planted flowers, and watched a movie together.  I think she had fun, but she's just so low key it's hard to tell.

My favorite moment (after the hilarious spider web hammock, of course) was the cheese.  She decided we should have macaroni and cheese for dinner so I gave her a bit of the cheese to see if she liked it before I melted it down.  Her comments were:  "Ummmm, good, tastes like peanut butter."  I have no idea what she meant by that, but I loved it.

She enjoyed the toy store.  Since I told her I'd buy her something, she wanted to be thorough.  We found the Olivia doll (that she eventually got) rather quickly, but she didn't want to commit too early.  We had to see everything.  She loved the mermaid Barbies - but I steered her clear of those quickly so as not to PO her mommy.  She was captivated by the small swimming pools (could barely tear herself away) but I was sure the already had one, so no need to duplicate.  In the end, she came back to Olivia.  Then we just had to decide if we should get the Olivia House, Olivia Car, large Olivia, small Olivia, or the one you could wear on your back like a backpack - which won out because she had on a "twirly" dress and ballet shoes.

All in all - a nice overnighter.  And now that we know she (and Mommy) can handle the separation, we may do it again soon.


(Although Hannah tends to lean toward the serious side, I think her acting older than Grammy was due to a general reservation with being in a new situation. Although she can be incredibly silly and excitable, she's also cautious and contemplative.)

I chastised my mom in the comment section of the family blog for not taking pics, as did some of my other relatives, and her response was "Come on! I'm out of practice caring for toddlers AND taking pictures. I have to focus."  Hahaha! Maybe next time she'll be able to multi-task.