I'm REALLY behind with my picture posting in spite of the fact that I haven't had time to even take that many pictures, but those I have taken are piling up.

HonFest was a few weekends ago, and although I was too busy doing classwork to go, Eric took Hannah down and met up with Erin, Ryan, Brody, and Addison while there. Erin took a couple pics and sent them to me.

Here are the kids camped out on a bench displaying their collected flowers. 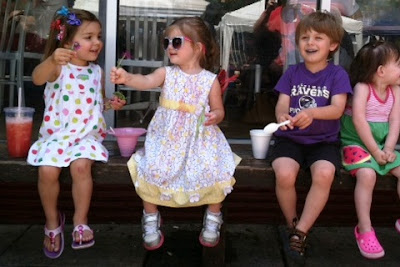 Apparently this scene of the kiddos flanked by the daddies on either side cause a lot of "awwwws" from the crowd. Cute. 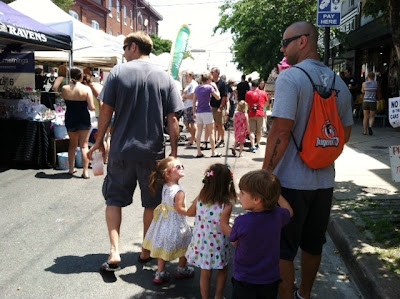 Later that day Eric took Hannah camping with the neighbors. Hopefully my next blog post will be a guest post from him describing that....
Posted by terri at 3:37 PM