Brace yourself for some very bad ballet class pics! I haven't taken my camera to class, just my phone, and there are no parents in the dance studio so when I try to get action shots, I have to take them while peering through the glass in the door...I would normally NEVER do that, and if I did, I wouldn't share, but in this case, they're the best I'm going to get and I REALLY want to share.

I researched various dance classes in the area off and on for a few months but wanted to wait until Hannah was settled into school before determining if she'd be able to handle an extracurricular activity. She kept asking to to take ballet, so I signed her up for a trial class on the first Wednesday of this month.

I chose Baltimore School of Dance, and although I have nothing to compare it to, I'm really happy that we picked this one. In addition to the convenience of being able to walk to and from the studio, the teacher is professional while still being really sweet and fun with the kids. Fun is a big priority for her, especially with kids this young. The class is called Creative Movement and is for kids 3 to 5 years old. They dance ballet at the beginning, then they read a story or sing a song and then put on a costume that pertains to that story or song and do some more dancing, and then after that, they trade their ballet slippers for tap shoes and spend the rest of the class learning tap techniques.

This first pic is from the tap section of the trial class. She was so smitten with the class that we ordered her a leotard immediately. 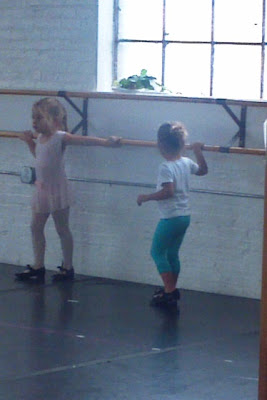 They read a hysterical book in this trial class called Frank Was a Monster Who Wanted to Dance and then put on monster costumes. The only reason I know that she read this and that it was funny is because the next day we were reading books online and randomly came across that one. This was her monster costume. 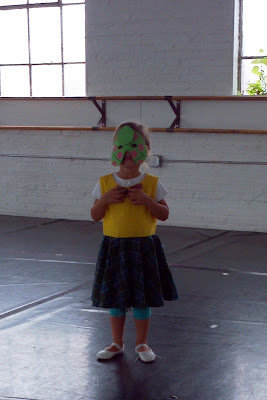 Knowing that I'd failed to get any good pics at that first class, I took a pic of her on our walk home. 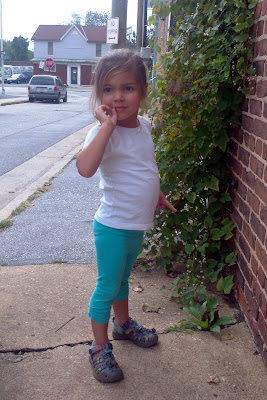 Her leotard didn't arrive in time for her second class, which she was very upset about, but she got over it pretty quickly and had a great time. They did something pertaining to Goldilocks and the Three Bears in this class, and I think this was a Goldilocks costume, but it's impossible to get any information out of Hannah so who knows. 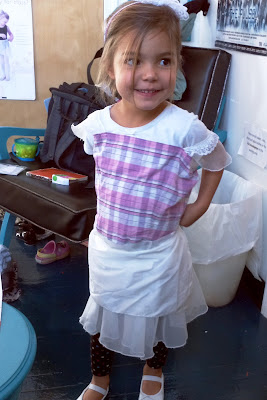 She had her leotard for her third class, but we arrived late so she put it on and raced into class before I could get a picture. As a result, I hovered at the door with my phone, trying to zoom (hello pixelation!) and photograph through glass again....sigh. Every time I peeked in at her, she was dancing around and staring at herself in the mirror with a big smile on her face (even when the other kids in the class were sitting down). The novelty wore off pretty quickly though. When she came out for her tap shoes she complained that the leotard was uncomfortable and insisted I tear out the tag. I did, but she was still eager to take it off after class. The leotard and tights is the number one reason that I quit ballet after only one year, so I get it. I just hope it isn't a deal breaker for her. I mean, I don't care if she becomes a famous dancer or anything, but I think it's a good activity for the time being and would like her to stick with it for a bit. I like that is physical, requiring movement, but that it's also an art form. It's the perfect well-rounded activity when you have to choose just one extracurricular . 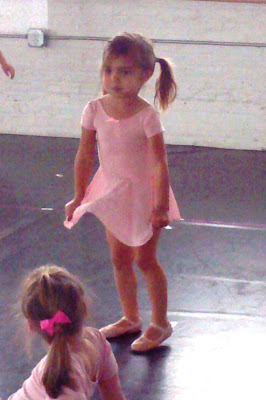 I think I heard her teacher say that they were fireflies in this third class...I overheard another parent say "mud fairy" and am thinking that one makes more sense. 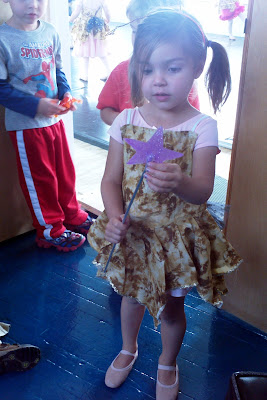 Her first dance recital, the Holiday Diversion, will be on December 15. I'm freaking out about having to apply stage make-up to a 3-year-old and will be phoning Aunt Laura for advice on that one, but I'm otherwise really excited for her. I think that getting comfortable performing at such a young age will serve her well when she has to give presentations at school or interview for jobs or anything else requiring a performance. Hopefully she'll get used to her leotard quickly!
Posted by terri at 2:19 PM