Random dress-up pics and a penguin

If I were a more regular blogger and not always so backlogged, I would upload one or two random pics here and there as they were taken and be happy for a short post, but I'm more of a procrastinator, so I end up with a bunch of random pics just sitting around for a couple of months, and since they aren't timely any more, I'm lumping them into one random and miscellaneous post.

Most of you are aware of Hannah's pension for dress-up. One of her philosophies is that the more clothing and accessories, the better. Another thing she likes to do is pick a color theme and stick to it, so all blue one day and all pink on another.  She also has a thing for princess costumes. She has two friends with princess costumes, and every time we're at their house, it's the first thing she goes for, so toward the end of the summer, when we were racing past (not through) the toy section at Target, her very sharp eyes spotted this blue Merida princess dress, and I relented a bought it. I like that it's blue and also that Merida is pretty awesome as far as princesses go.

One evening she donned her Merida dress, neon sunglasses, rainbow bug umbrella, and roller skates and skated around the house striking poses. I think this is my favorite Hannah ensemble ever. 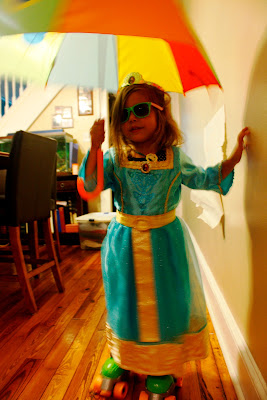 I may have already posted this one, but if not...BabyLegs on her arms and legs were a phase as well. 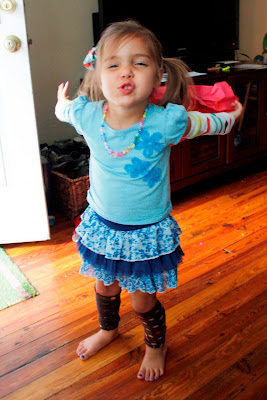 Grammy came across some princess/ballerina dresses at Sam's Club one day and scooped up two. They came with a headband and fake ballet slippers AND were cheaper than the Merida dress....There was no blue so she picked out purple and pink and shipped them off to Baltimore along with a really great Olivia book. 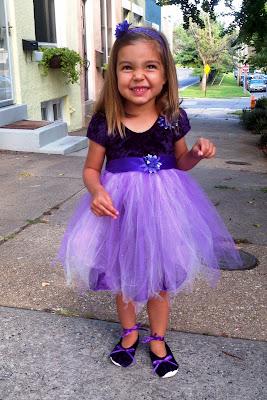 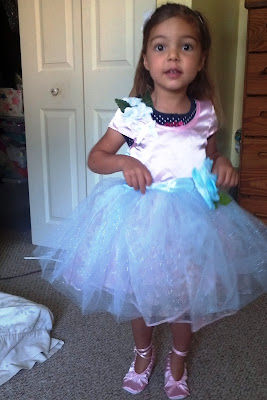 Hannah likes to stand on her tip toes and dance. She also INSISTS that these are ballerina costumes, not princess costumes. She insists this when she spies another princess costume that she wants and I remind her that she has plenty (she picked out a Belle one at the consignment shop two weeks ago). She then reminds me that she only has two because two are ballerina dresses. Sheesh. She's had her eyes on the Melissa and Doug princess costume for the past few weeks and asks for it every time we're at Whole Foods. It's $30 though!! No thank you! I almost feel like I should buy it and save it for Christmas though because she asks for it even when we aren't at the store.

This last pic is not a dress-up pic, but I do love the fact that she matched up her rainbow leggings with an unrelated rainbow dress. We ended up at the zoo one random morning before it got cold, and got to meet Winnie, the penguin ambassador. She's so cute!! It's the closest we've ever been to a penguin and was super cool. 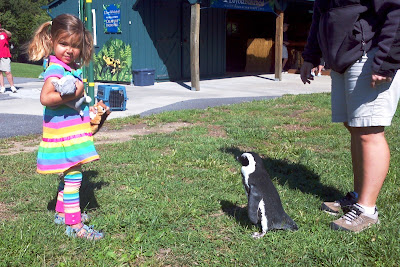 I don't know how to wrap up such a miscellaneous post, except to say that I feel relieved to "clean out" these random pics. Next up is our trip to Weber's Farm earlier this month, pics from Hannah's first dance class, then pics from the Renaissance Festival yesterday, and from Black Cherry Puppet Theater today....Let's see if I can get them posted before it's Christmas!
Posted by terri at 5:34 PM