Hannah goes to a puppet show

Every year I vow to take advantage of Free Fall Baltimore, and every year November comes before I have a chance to live up to that vow--but not this year! Last Sunday after yoga I was feeling crafty, even a little artsy, and motivated to do something other than sloth around the house like we normally do on Sunday afternoons. The weather was beautiful, but I was in no mood to follow Hannah around a playground, and although I was motivated, I wasn't that motivated so a hike was out of the question.

I ate my lunch at the breakfast bar in front of the computer while scrolling through the Free Fall activities and settled on a 3:30 puppet show at Black Cherry Puppet Theater in the downtown neighborhood of Union Square/Hollins Market. We got there around 2:30 to take advantage of the puppet making workshop before the show.

The workshop was pretty impressive. I assumed it would be paper bag puppets and some markers maybe, but nope. They had paper plates wrapped into cones. They put one cone on the child's fingers and another on the child's thumb (pointy side out) to make a giant mouth, then they wrapped the two cones in a fabric of the child's choosing, cut down the center to form a mouth, hot glued it, and then passed the kid to the next station where they picked pre-cut felt teeth, eyes, ears, noses, tongues, and whatever else they could think to do with the array of options. There were even feathers.

Hannah finished her puppet and was running around the yard enjoying the sunshine when Brody and Addison showed up. They always bring the fun meter up a few notches! Brody made his puppet and then him and Hannah modeled them while I attempted to capture the moment. 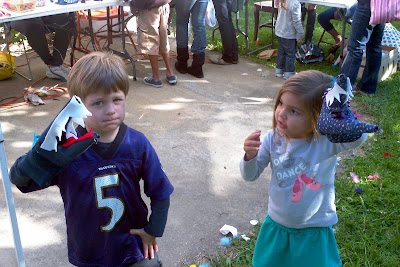 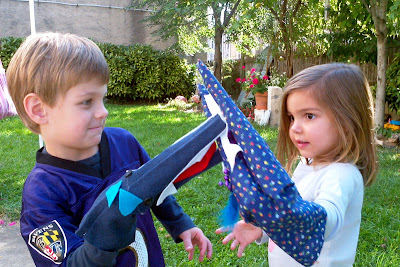 There was also another puppet-making station using Popsicle sticks which already had paper-mache heads glued on. Two really nice young girls were manning that table and helped Hannah give the one that she picked some hair, a cape, clothes, and a long green beard with a bow tied in it. Then the three kiddos retired to the yard to play with their puppets and hang out and wait for show time. 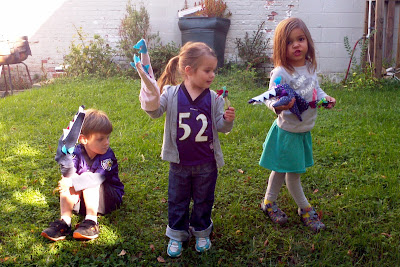 The show was the Frog Prince. Hannah was enthralled but afterwards she complained because the witch wasn't part of the show. She's a huge fan of all things scary these days and was really looking forward to there being a witch. After the lights came on, the puppet masters/theater owners brought the princess and horse puppet out for all the kids to touch and investigate. 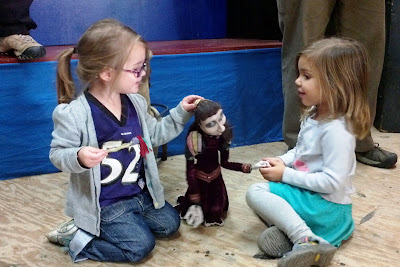 This is an awesome Sunday afternoon afternoon activity when you're in the mood to do something you can feel good about without expending a lot of unavailable energy. I'll most definitely be keeping an eye on their performance calendar and taking Hannah to other shows in the future.
Posted by terri at 8:12 PM