The BSO, a Greek festival, and trick-or-treating on The Ave

After a very long 2 weeks away, Eric is home again, and he made it back in time for a really fun weekend. On Saturday morning we had tickets to Wizards and Wands, Baltimore Symphony Orchestra's first family concert of the season.  I had only bought two tickets since Eric's original flight had him arriving home on Saturday evening rather than Friday evening, but I was able to purchase a third ticket online on the morning of the performance for a seat directly behind the other two--perfectly serendipitous!

The highlight of the show was the performance put on by the Enchantment Theatre Company while the orchestra played Paul Dukas' Sorcerer's Apprentice, and fortunately, this performance followed the playing of Baba Yaga which the conductor, Ken Lam, introduced as a song written about a wicked old woman who kidnapped children and ate them. I cringed when he said that knowing that Hannah, sitting in the row in front of me with Eric, was no longer enjoying the show as a result of that comment. I thought we'd have to leave early but she made it through that song, and then the next one had actors from the theater company dressed up as enchanted broomsticks dancing around being silly, and that saved the day so we made it through the whole performance after all.

After the performance we walked across the street to the Greek festival for lunch. Earlier that morning Demetrios let me know that if I could resist the food vendors in the tent, the really good stuff was in the basement of the church, so we made straight for the church and chowed down on all Athenian shrimp and braised leg of lamb and dolmas (my favorite) and spanakopita and all sorts of other yumminess.

Since I didn't get a pic at the BSO, I busted out the camera phone at lunch and captured the fam striking a most attitude-laden pose. 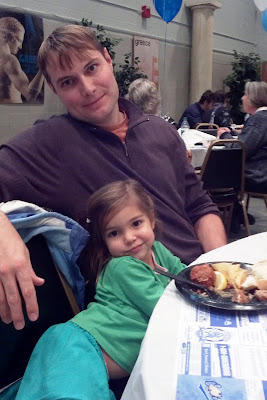 After lunch I beelined for the honey puffs. Super yum. Hannah was happy with her little shortbread tart, which was good because it meant more honey puffs for me. 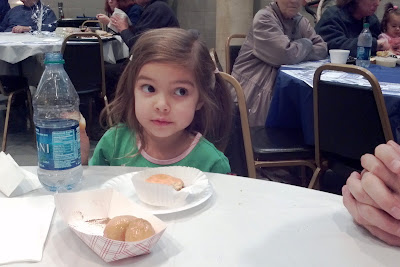 We snuggled on the couch in front of a movie when we got home and then putzed around until it was time to trick-or-treat at the various merchants on The Avenue. Hannah decided to dress as Merida again, and Kylie came over dressed as Sleeping Beauty. 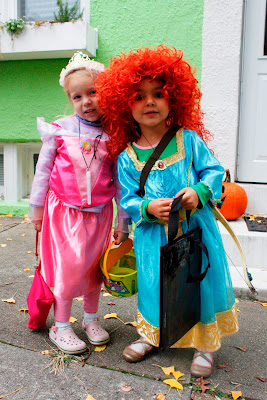 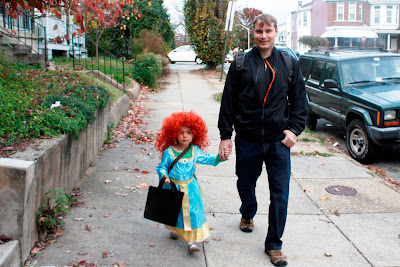 I wish I could remember the name of this store...it's been there forever and always has the best window dressings. The girls stopped to admire the various body parts, some skeleton, some mannequin, some unknown. 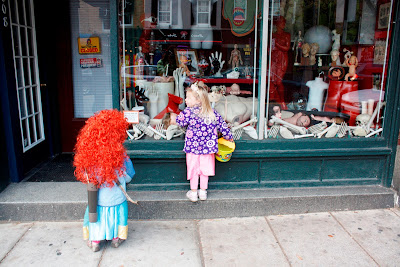 The chairs in front of Atomic Books were also a big hit. The comic book "treats" that the store gave out were a big hit with me since I was already wondering what we were going to do with all the candy we collected. A few of the comics were even age appropriate and were read multiple times today. 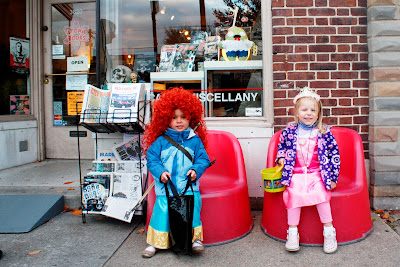 After ransacking every store for everything they had, we trudged home with cold noses and a heavy bag of candy. Hannah loved her first trick-or-treating experience and never even asked for any of the candy. I thought about letting her have a piece, but since she didn't ask, I figured why offer? Eric will take it to work with him tomorrow and share it with his sailors, and I will sleep well knowing that I let Hannah participate in a quirky, fun, traditional American activity without having to sacrifice her health in the process. Everybody wins.

It was really fun-filled day, and although Hannah and I would have had fun no matter what, I'm glad Eric made it back the night before because him being there doubled the awesomeness of the day.
Posted by terri at 6:53 PM