Everyone gets a weekend away

Eric and I took a whole weekend off, our first one since Hannah was born, and hid out in the mountains indulging ourselves. It was partially a belated celebration of our 4th anniversary (October 24) and partially just an overdue need to get some grown-up quality time. We don't date much--I'm too tired by the time I get her to bed and don't have a huge interest in doing traditional date activities like dinner, drinks, and movies--so quality time is scarce.

We are also figuring that since there's another bun in the oven, it will most likely be another 3 years before we can take our second weekend away. I'm not much of a pumper, and I nursed Hannah for 2 years and intend to the do the same with the second, so if you're nursing and not pumping, it means you're pretty much chained to the kid. It's fine though. I've come to trust Grammy with Hannah since I know she'll follow my rules, even if she doesn't agree with them, but I like to keep my babies close while they're babies so I imagine that like his sister, he'll be at least 2, if not older before I leave him overnight. We'll see though; maybe he'll take after his dad and be more laid back than his super high-maintenance sister, and who knows, maybe I'll be more laid back than I was with Hannah! Hah! Unlikely, but anything is possible.

Eric originally suggested we go to a bed and breakfast in Hagerstown but I nixed this idea immediately. First of all, I don't like the idea of a bed and breakfast. I'll try one someday, but for now, I'd rather have the autonomy of a hotel. Second, just having breakfast means we have to eat the rest of our meals out, and I have yet to find a restaurant in Hagerstown that I like. Anyway, who wants to vacation in the town where they grew up?? Not me. So I suggested that hotel near Chesapeake Beach that has a spa because if we're going to do this, I want to do it right, and doing it right means I also get a massage. Then Eric reminded me of the Rocky Gap Resort and Lodge. Perfect! We booked a room and a massage before he left for Germany.

After picking up Hannah from school on Friday, we drove straight to Hagerstown. Grammy met us at the outlets because they're right off the highway, and because, as usual, she wanted to take Hannah shopping. Fortunately saying goodbye is harder for us than for Hannah who waved distractedly and then gave the obliging kiss when requested.

We hopped back in the car and drove a little farther west. At check-in, Eric asked if they happened to have any suites available (all were booked when we made the reservations and we weren't holding anything back on this weekend away--it's too rare a thing for us, and anyway, he had extra per diem money from his trip to Germany). They did have one open so we went and checked it out along with the room our reservations were for. The suite was an additional $80 a night, and the main reason I wanted it was for the garden tub with jets. I knew I wouldn't be taking advantage of the hot tub due to the baby in the belly, and I was craving being submerged in hot, bubbly water. We splurged and took the suite.

It had two rooms with a connecting balcony overlooking the lake. The first room had an electric fireplace that made a great backdrop for our Saturday evening Rummy game. 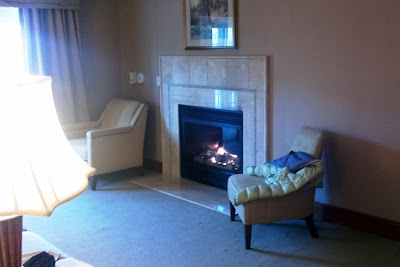 The other room had a king bed with these giant Roman-type pillar/posts. I love king beds. It's the only way you can sleep with another person and sleep like you're sleeping alone which is critical for a very light sleeper like myself. I hope to someday own a king-sized bed.

After we settled in to our room on Friday, we donned our hiking shoes and went exploring. We found this super cool, old graveyard. 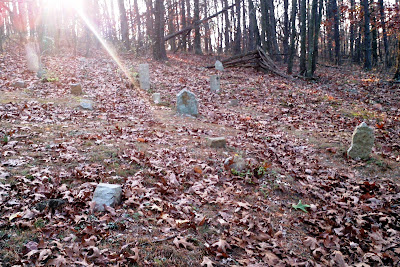 We also found a lot of trees that had been gnawed on by beavers. 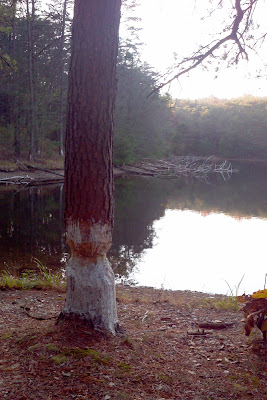 The white stripe around the bottom of these trees is the beaver damage. Every single tree in that section had been gnawed on. I don't know if takes beavers a few days to fell a tree or if they just got discouraged and gave up and moved to the next one over and over and over again. 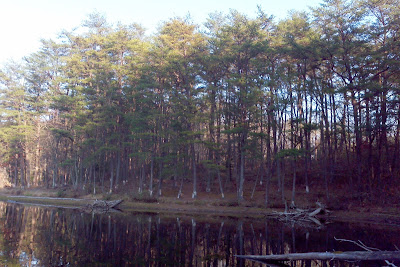 Here's a view of the lake from this small corner. 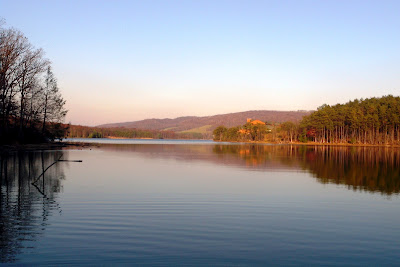 Then we abandoned that part of the lakeside trail and hiked out to this overlook to admire the view. 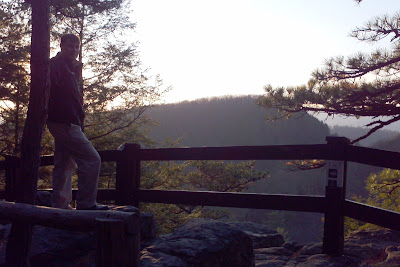 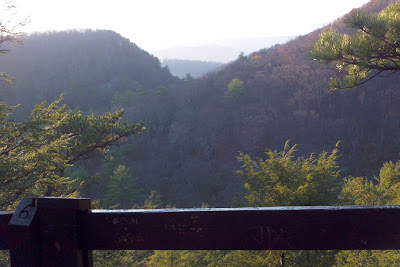 As the sun dropped lower in the sky, we made our way back to the lodge. This is a pic of the beach in the distance (on the other side of the lake from where we had been exploring). 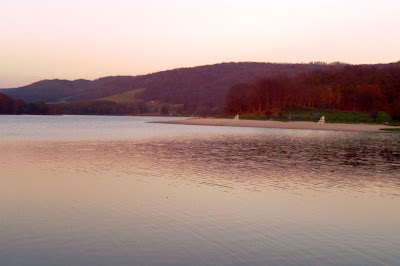 That night we took advantage of the seafood buffet, gorging ourselves on way more food than we should have eaten, then we rolled our fat bellies back to our room and crashed.

We had wanted to hike the whole way around the lake the next morning, a nearly 6 mile hike, but it didn't work out. The guy at the adventure booth let us know that the junior hunters were on the other side of the lake today so we should wear bright colors. Eric wasn't thrilled with going anywhere near the junior hunters, and really, I couldn't blame him. It was a good deterrent. Anyway, my massage was at 1:00 that afternoon, and we couldn't move it and didn't think we had enough time for the full hike since we'd lollygagged around that morning. Instead we hiked partially around the lake, starting on the opposite side of the beaver-damaged area. We walked by the beach and made it all the way around to the campground. 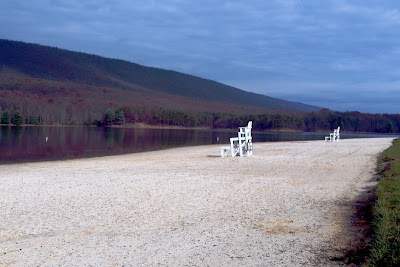 After scoping out the campground, which we plan to take advantage of next summer (if this baby is easier than Hannah), we started our trek back. A mile marker let us know that the total hike would be more than 4 miles. Pre-pregnant Terri would not have been phased by this, but pregnant Terri had some super sore feet and legs before we'd even made it out of the campground and my hands were swelling and tingling. The massage was awesome. So was the garden tub, which I took full advantage of all weekend.

Hannah didn't seem to miss us at all though she did call to say good night on Friday night and tell us about her new pajamas (one pair pictured below). She also picked out a long-sleeve red shirt to complete her Ladybug Girl outfit, some new shoes (a $10 pair of bright blue Adidas), and her new boots which were not on sale and not cheap, but she insisted and Grammy seems to have a hard time telling her granddaughter no when it comes to shopping. She was wearing her new boots when we went to pick her up on Sunday and had apparently had not take them off much since getting them. She says they look like mine, and indeed, they do. She also picked out an Etch-a-Sketch and figurines of the family from the Olivia series.

(Grammy gets credit for the rest of the photos in the blog.) 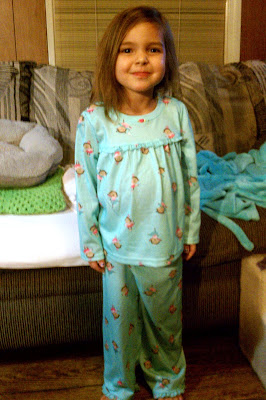 On Saturday they went to play with Clay and spent much of the morning throwing leaves on each other in the backyard. I'm glad she got to participate in this classic fall activity because it's not something she can do at home in the city since we have no yard. 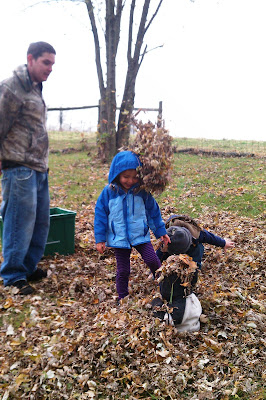 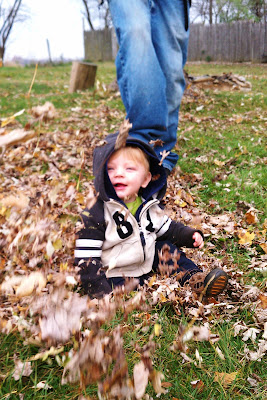 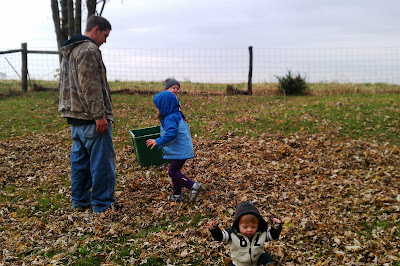 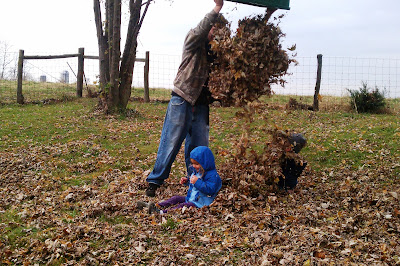 After hanging with Clay and Mason and Uncle Chip, Grammy and Hannah met Aunt Pam at the toy store. Pam had sent Hannah a gift card for her birthday, but there is no Toys R Us near us in Baltimore so we sent it back with Hannah and she picked out a present this weekend. Grammy convinced her to look at everything in the store before settling on something, but it was all over after Hannah found the FurReal toys. She picked up a puppy that barks and throws itself around obnoxiously and refused to put it down. Given her previous toy choices, this one did not surprise me.

They also went to the library for books and movies and to the grocery store to pick out meals. Throughout it all, Hannah was just eager to get back to Grammy's. She likes to hole up there, I guess.

Before Grammy went to bed on Saturday, she emailed me some Hannah-isms which had me and Eric cracking up:
I really like the next to last one about wallpaper and would like to know the context of this sentence...I would also like to know why she was dropping her pants and brushing her teeth at the same time--Grammy?? Also, I should note that Eric and I high-fived at the thought of our daughter not knowing what a donut was. Grammy left that part out, but when she relayed the story to us, it began by walking by the donut case and Hannah asking what those were. I take great pride in the fact that she knows what kale is but not donuts.

I wish I could say she was thrilled to see us when we showed up on Sunday, but she was actually a little bummed because we came when she was just about finished with lunch, and Grammy had promised her some of her coconut sorbet when lunch was over. I think she thought that since I was there, I'd put a halt to that, or maybe drag her out before she could eat her sorbet. Once I assured her that she could still eat her sorbet, she simmered down and gave us a big hug and a smile and started showing us all the loot she'd made out with.

Later when I asked what her favorite part of the weekend was she got a big grin on her face and said "eating ice cream!" What can I say, she may recognize kale over a donut, but she's still a typical kid who is easily won over by cold, sugary treats.
Posted by terri at 9:27 PM